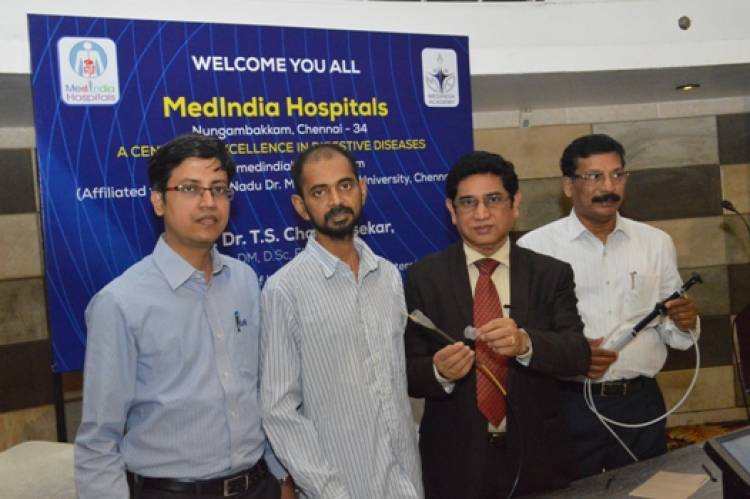 For a sole bread winner of the family, nothing is more tragic than to be afflicted with an advanced cancer of the intestine at the prime age of 41. The silver lining in an otherwise hopeless situation is ending up in the right hands to get the latest treatment for successful palliation and also become part of making a record as the first to have received such a treatment in India.

We at the Medindia Hospitals, Nungambakkam, Chennai, a tertiary specialty centre of Excellence for Digestive Diseases, affiliated to the Tamil Nadu Dr. MGR Medical University, happened to receive a young gentleman employed in Malaysia with advanced cancer of the duodenum with symptoms of incessant vomiting, severe weight loss and jaundice due to blockage of both the biliary tree and duodenum, the first part of small intestine. He was just skin and bones due to his progressive illness and poor nutrition. He could not retain the food he ate. He was referred to us from his native place Kumbakonam.

At this advanced stage,the tumour infiltration was such that a surgery was not feasible and conventional endoscopy treatment would not be successful. There was obstruction in both the  biliary system as well as proximal small bowel causing severe jaundice and unrelenting vomiting due to total obstructionto the outflow of food. This was the challenge that needed to be addressed.

Thus, a team doctors under the leadership of Dr. T.S. Chandrasekar, a renowned Gastroenterologist , carried out choledochoduodenostomy, an advanced endoscopic procedure to relieve the obstruction to the flow of bile, using Endoscopic Ultra Sound (EUS), a state of the art medical equipment, which combines both ultrasound as well as endoscope to access the site of operation for delivering a stent for palliative care, effectively.

By skillful maneuvers, the bile duct was identified by EUS endoscope passed through the patient’s mouth, and a self-expanding metallic stent (an artificial tube) was deployed connecting the bile duct and the duodenum, to provide free flow to the passage of bile obstructed by the cancerous growth. Subsequently jaundice came down as became evident from the fallof bilirubin level from 20 mg to 3 mg% in just few days.

Now came the challenge of providing relief from vomiting due to obstruction to the gastric outflow. With a growth in the duodenum that was too tight and too long, the prospect of standard stenting looked bleak and not feasible. The relief could come only by apalliative gastrojejunostomy-creating of a shortcut passage from the stomach to intestine. But the patient was unwilling either for open or laparoscopic surgery in the backdrop of family history of cancer and the tragic outcomes he witnessed.

The only option left was a state of the art procedure, namely, EUS guided Gastro Jejunostomy (GJ). This anastomos is between the stomach and the proximal small intestine called jejunum,though a straight forward and established procedure in open surgery, is not yet available in the regular therapeutic repertoire of the endoscopist because it is writ with innumerable challenges and demand extraordinary skills in endoscopy, endo-ultrasound anatomical orientation and of course the logistics of availability of complex instrumentation.

The recent introduction of  the state of the art ‘HOT AXIOS- Lumen Apposing Self-expanding Metallic Stent (LAMS)’, from Boston Scientific Co., USA, came in handy. It gave hope that the endoscopic GJ was possible to bypass the obstruction caused by the malignant growth in the duodenum. The GJ was meticulously planned to the last detail and executed successfully on 26thDec 2018.

The highlight was that the procedure was transmitted live to the learned audience of surgeons attending the then ongoing 78thannual conference of the Association of Surgeons of India (ASI) at the Chennai Trade Centre.

These two endoscopic procedures added a new lease of hope and  comfort to the patient by reducing jaundice and provided relief from vomiting. He could start taking food orally which he was unable for over few weeks. The sight of he taking food and retaining it was the most gratifying scene for the endoscopist.

These procedures qualify as minimally invasive endoscopic surgical procedures since they were carried out through mouth without opening the abdomen under minimal intravenous sedation, without blood loss and any blood transfusion.

These procedures are likely to herald a new era in the treatment of advanced small intestine cancer, which will prove a great boon to the suffering patients unfit for surgery.  It promises improved quality of life.

To the best of our knowledge and as per our internet search, this is for the first time in India that both the above cited procedures were done on the same patient simultaneously.

Telangana will spend about Rs 1.17 lakh crore during the next five years to complete...