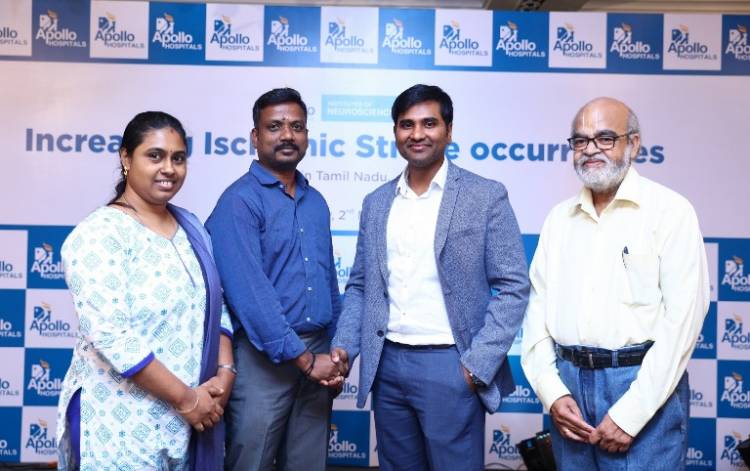 Stroke cases see a surge in Chennai, Dr. S. Karthikeyan,Consultant Interventional Neurologist saved more than 22 patients between 20 to 80 years of age from paralysis caused due to Ischemic Stroke within a span of few months at Apollo Hospitals, OMR. He claims that stress and sedentary lifestyle is the key cause for this rise.

According to the World Health Organization, the biggest cause of mortality in the world is ischemic heart disease and the second is stroke. Stroke cases are on the rise in developing countries, alarmingly in the metropolitan cities of India. Apollo Specialty Hospitals, OMR receives more than 12 stroke patients in a month, and most of them are under 45 years of age.

Around 22 patients were admitted to Apollo Speciality hospitals OMR, Chennai within a span of few months under Dr. S. Karthikeyan, Consultant Interventional Neurologist, among which 50% of the patients were between 20 to 40 years of age.

Majority of stroke (85%) occurs when blood stops flowing to a part of the brain due to a clot or thrombus, usually referred to as ischemic stroke. This interruption in blood flow leads to damage to the surrounding brain cells. Patients who had large blood vessel blockage underwent a procedure called mechanical thrombectomy at Apollo Specialty Hospitals OMR. Mechanical Thrombectomy is a new revolutionary procedure for acute ischemic stroke. Mechanical thrombectomy is an endovascular procedure in which a catheter with a stent is passed through the patient’s leg to the brain and the clot is identified, captured and removed by a stent.

Speaking about this rise, Dr. S. Karthikeyan, Consultant Interventional Neurologist, Apollo Specialty Hospital, OMR Chennai said, “Stress, Lifestyle changes and dietary habits seems to be the main cause of brain and heart diseases. Youngsters follow a frantic lifestyle spending more than 12 to 14 hours at work including late night, sleep deprived shifts. They cause more harm to themselves by eating junk foods, smoking and alcohol abuse. These are observed as some of the causes of stroke in young people, on the other hand genetic factors, coagulation disorder, vasculitis and dissection could also be the cause.”

He also said, “Most of the cases reported in our hospital fall under this category, the major stroke risks in young patients is that their brain swells faster, hence they should reach the hospital within the golden hour for stroke patients which is 4 hours. We used Mechanical Thrombectomy to treat majority of the patients while we also used intravenous thrombolysis in a few, a procedure that helps in lysing the blood clot. All these patients recovered remarkably from paralysis after undergoing these procedures. With these recent medical advancements stroke is no longer a disabling disease if treated on time.”

VIPs continue to visit Apollo Hospitals to enquire about...

VIPs continue to visit Apollo Hospitals to enquire about Jayalalithaa, VIPs from...

ISIC Helps an Infant with Spinal Deformity to stand straight

Still deciding on the perfect Valentine’s Day gift for him? This quick guide from...