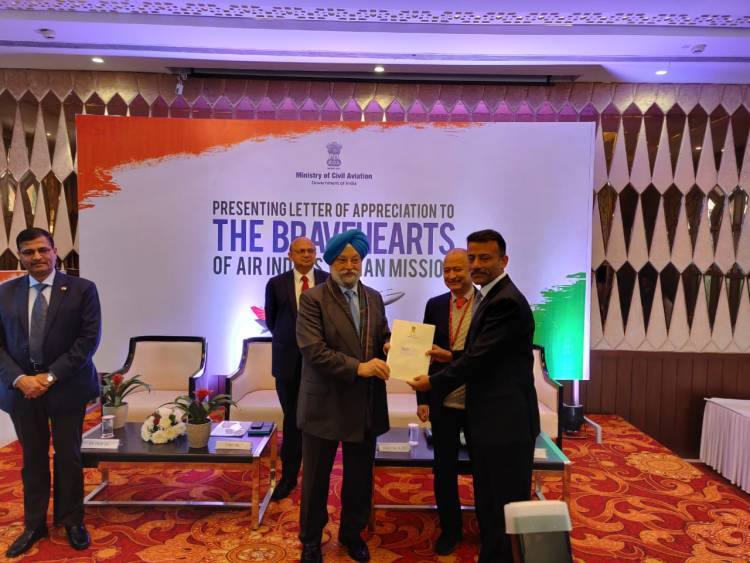 Shri Hardeep Singh Puri, Minister(I/C), Civil Aviation, today handed over the letters of appreciation issued by the Prime Minister Shri Narendra Modi to the 68 Air India Staff, who conducted evacuation operation of the Indians stranded at Wuhan.  Shri Pradeep Singh Kharola, Secretary, Civil Aviation, Shri Rajeev Bansal, CMD, Air India, Shri Ashwani Lohani, Ex-CMD Air India along with other senior officials from Ministry of Civil Aviation and Air India were present on the occasion.  A total of 647 Indians, as well 7 Maldivians, were evacuated from the Chinese city of Wuhan, the epicenter of the Novel Corona Virus Flu.

Appreciating the team’s effort, Shri Hardeep Singh Puri, the Civil Aviation Minister said, “We are proud of the intensive commitment shown by the Air India team to bring home their countrymen in spite of very trying conditions in the epidemic-hit Wuhan.”  He further added, “I feel proud to confer the appreciation of our Prime Minister expressed through personal letters to all those who had been part of this historic mission. I heartily thank all of them once again for their service to the nation.”

An emergency evacuation operation from the Wuhan city was executed by the crew of Air India, which sent two 423-seater B-747 aircraft for two consecutive days, on 31st of January 2020 and on 1stof February 2020 despite being aware of the severe situation in the region. The operation was led by Captain Amitabh Singh, Director Operations, Air India with 68 members of Air India. The Air India team consisted of 8 pilots, 30 cabin crew, 10 commercial staff and one senior officer. The heroic act received appreciation and acknowledgement from people all over the world.

The E-Commerce Giant Amazon Web Services has planned to invest 1.5 billion USD to...

The world’s favourite jeweller, Joyalukkas, will further expand its presence in...