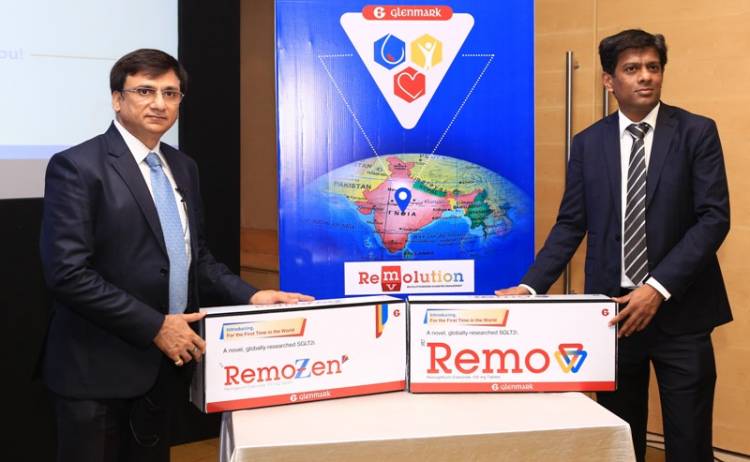 * India is the first country to get access to Remogliflozin, an innovative, patent-protected sodium glucose co-transporter-2 (SGLT2) inhibitor indicated in the treatment of type-2 diabetes mellitusin adults

SGLT2 inhibitors are novel anti-diabetic drugs that help achieve glycemic control by acting on the SGLT2 receptors in the proximal convoluted tubule of the kidney, thereby preventing renal reabsorption of glucose and promoting excretion of glucose in the urine. Along with providing glycemic control, SGLT2 inhibitors help induce weight loss and reduce cardiovascular risks.

Glenmark is the first company in the world to launch Remogliflozin and India is the first country to get access to this innovative drug. Glenmark has launched Remogliflozin in India under brand names “Remo” and “Remozen”. Remogliflozinis the only SGLT2 inhibitor to be manufactured in India from active pharmaceutical ingredient (API) to formulation.

Remogliflozin has been studied in 26 clinical trials globally, covering around 2,500 patients from various ethnicities. Remogliflozin was discovered and developed by Japanese firm Kissei Pharmaceutical Co. Ltd. and later developed by GlaxoSmithKline plc and Glenmark collaborator BHV Pharma, a wholly owned subsidiary of Avolynt, Inc. which is based in North Carolina, USA. Glenmark secured certain rights to Remogliflozin through a licensing collaboration agreement with BHV Pharma, and conducted the Phase-3 clinical trial, which included the largest number of Indian patients tested for any SGLT2 inhibitor.

“Globally, SGLT2 inhibitors are emerging as a preferred treatment for management of type-2 diabetes and Glenmark is proud to introduce an innovative molecule in this class, which is cutting-edge and researched extensively. Glenmark has been a pioneer in providing access to the latest treatment options to diabetes patients in India at a relatively low cost and with the launch of Remogliflozin, the company aims to increase patients’ access to SGLT2 inhibitors as this class of drugs have proven benefits for effective diabetes management,” said Alok Malik, Senior Vice President, India Formulations, Chronic Cluster at  Glenmark Pharmaceuticals.

In 2015, Glenmark transformed the diabetes market by launching its dipeptidyl peptidase-4 (DPP4) inhibitor Teneligliptin at a price that was approximately 55% lower than the other DPP4 inhibitors available in India at that time. Since then, the access to DPP4 inhibitors has increased significantly and currently more than 100 brands of Teneligliptin from several companies are available in the country.

India is estimated to have around 72 million adults living with diabetes, according to the International Diabetes Federation’s Diabetes Atlas 2017.1According to Indian Council of Medical Research’s (ICMR) – INDIAB study on prevalence of diabetes and pre-diabetes published in the Lancet Diabetes Endocrinology 2017, the prevalence of diabetes in Tamil Nadu was around 10.4%.2In October 2018, the International Journal of Community Medicine and Public Health published a study involving 1361 subjects on prevalence of undiagnosed and uncontrolled diabetes mellitus among adults in South Chennai. According to this study, nearly 22% of the subjects were known diabetics and 10.3% were newly diagnosed diabetics. It also revealed that over 65% of the known diabetics had uncontrolled sugar values of >200 mg/dl and the prevalence of diabetes in people under 50 years was more than 20%.

Sri Shakthi SAT to be launched by ISRO ISRO is to launch...

The bliss of travelling and exploring new destinations allows one to experience...

Sachin Tendulkar believes he 'Chose the right cause' for...

Sachin Tendulkar expressed his excitement and belief in providing for the right...