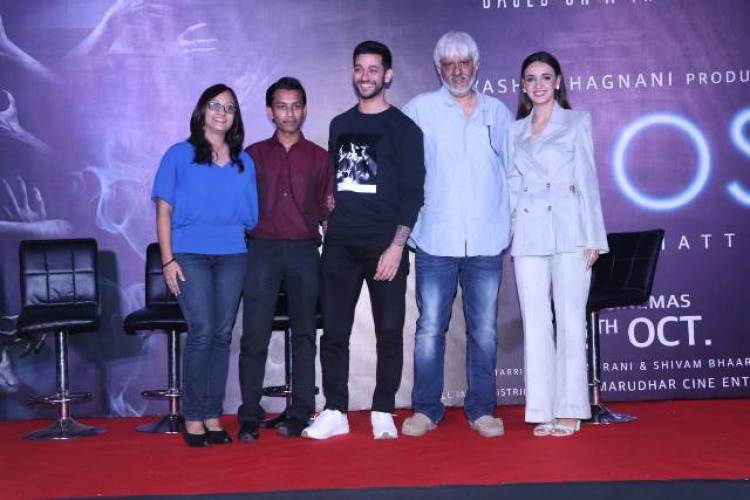 Mumbai, October 15, 2019: A couple of days ahead of the release of his upcoming horror-thriller Ghost, director Vikram Bhatt hosted a special session on the existence of ghosts along with demonologist SarbajeetMohanty,  Pooja Vijay, Actress SanayaIrani  and Shivam Bhargava . Held in Mumbai, the discussion was fascinating and hair-raising at the same time. Right from whether or not ghosts exist to them existing in the same room at that time, Bhatt had the audience hooked onto every word he uttered.

“My strong belief in the existence of ghosts everywhere is the driving force behind making most of the films you see me helming. I am pretty convinced about the existence of parallel dimensions and beings that exist in those dimensions. Every film and story you see from me taps into these thoughts”, says Vikram Bhatt.

SarbajeetMohanty, demonologist, added, “It is important for us to understand the details about ghosts and their existence. A lot of the information and facts about ghosts are twisted and lost in myths and stereotypes. For example, all ghosts are not to be feared. Discussions like today’s need to happen more often so we can circulate the right information. Vikram’s knowledge about ghosts stems from his deep interest in them.”

Bhatt’s Ghost will take you on the riveting journey of Karan Khanna who has been accused of killing his wife but believes she has been murdered by a spirit. What follows is a story of inspired and absolute insanity which will have you biting your nails in shock and fear.Vikram Bhatt shared that the idea of Ghost came to him when he read a newspaper article about how a British court allowed a matter involving spirits to be tried. He was intrigued and decided to channel his energy into this film.

Ghost, A VashuBhagnani production, directed by Vikram Bhatt will release in cinemas on 18 October.

Actress Parul Yadav — who shot to fame in the film Govindaya Namaha — has now jumped...