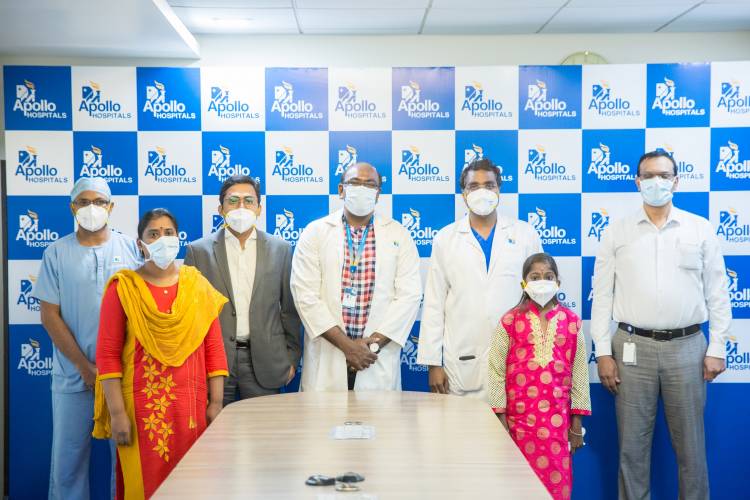 Apollo Hospital doctors successfully saved two young lives by performing complicated living donor liver transplants on a Six-month old baby and an Eleven-year-old girl who had extreme health complications during the pandemic. Mothers of both children gave a new lease of life to them once again by donating a part of their liver.

Six-month old Baby Abhyansh Mondal had persistent jaundice since his birth in January 2020 which eventually got worse with time. The baby was affected by a rare genetic disorder due to which he was born without a bile duct. Abhyansh Mondal son of Abhishek Mondal and Samyuktha Kumari from Jharkhand was suffering from Biliary Atresia, a rare, congenital liver disorder. Though his illness was diagnosed in Jharkhand in January, the family could not go for further treatment due to the continuous lockdown.

Speaking about this procedure Dr. Elankumaran, Surgical Gastroenterologist, Liver Transplant Surgeon, Apollo Children’s Hospitals, said, “By the time they brought the child to Apollo Chennai the baby’s liver was completely damaged. The baby was weighing eight kilograms only. His bile duct was completely not formed and this is not a common scenario. Studying all the complications and emergency we suggested to do a transplant which was the only option to save the child. Baby Abhyansh underwent living donor liver transplantation two months ago and his mother Mrs. Sanyutha Kumari was the live donor. Post the transplant the patient recovered completely and returned back to Jharkhand.”

Similarly, eleven-year-old Ashvitha from Trichy was diagnosed with Congenital Hepatic Fibrosis, a rare disorder associated with Polycystic kidney disease leading to renal failure 4 years ago. She was under treatment in her home town, however, her health was continuously deteriorating. Her parents noticed some serious changes in her day-to-day activities, she was unable to even continue her studies for a year. She was brought to Apollo Hospitals Chennai for further medical evaluation.

The surgical team led by Dr.K.Elankumaran, Surgical Gastroenterologist, Liver Transplant Surgeon Apollo Children’s Hospitals and anaesthetist Dr. Vasantharoopan and team performed the transplant successfully. The procedure was performed with financial assistance under T.N.C.M. Health Insurance scheme the liver transplantation was carried out after due approval without any cost.

Apollo Children’s hospital is one of the tertiary care paediatric hospitals with adequate set up to manage children with complicated liver disease including medical treatment, plasmapheresis and liver transplantation.

Changes in the pattern of train services

Due to line block and power block to facilitate engineering works between Nayudupeta...