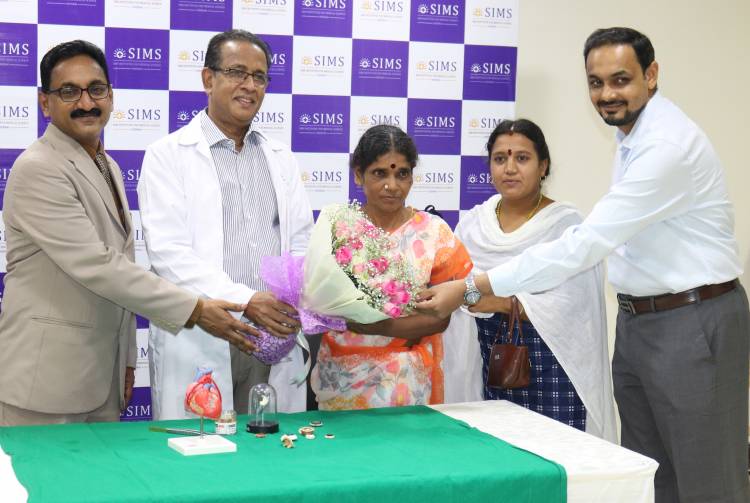 Speaking about the first of its kind rare and complex surgery, Dr. V.V. Bashi said, "With continued advances in heart surgeries, now more and more re-operative cardiac surgeries are also being performed to improve life expectancy of the cardiac patients. However, a fifth-time valve replacement of the heart remains a rare & extremely risky surgery in my 40-year career. This requires extensive experience and precision, as it is an extremely complicated procedure carrying risk of life and cardiac failure. Since the patient has already undergone four heart surgeries in the past, the internal scar tissues between the structure of the chest makes it quite challenging to re-enter the chest and perform the surgery without damaging parts of the heart like cardiac chambers, coronary arteries, aorta etc. Further removing the existing tissue valve from the heart and replacing with a fresh valve without injuring the vital structures needs extensive planning and meticulous execution. Having safely and successfully performed this kind of a surgery, it is truly gratifying to say the least".

Sharing the patient's history and the line of treatment, Dr Mohammed Idhrees, Consultant Cardiothoracic & Vascular Surgeon said “A 61-year-old woman was suffering from Rheumatic heart disease. She underwent mitral valve repair twice in the early 90’s. She underwent third time redo surgery in 2008 for which a mechanical valve was implanted. Unfortunately, within a year in 2009 her mechanical valve had a malfunction as she was not strict on her medication protocol. She underwent 4th time redo mitral valve surgery, where her mechanical valve was replaced with tissue valve, giving her a lease of 12 more years.  However, 12 years later (in 2021) her tissue valve is degenerated, requiring replacement. Now we had to perform an open-heart surgery for the fifth time to remove it and replace it with a new bio tissue valve.”

Also, the decision to choose between the mechanical or a tissue valve for patients undergoing surgical cardiac valve replacement comes with a lot of complexities that involve synthesizing clinical factors such as risk of bleeding, likelihood of reoperation, and patient preference.

Further Dr. VV Bashi added, “Since this patient was an elderly 60-year-old woman, with a history of four cardiac surgeries, the complexities of the fifth surgery including mortality and morbidity, had only increased exponentially. We reviewed her condition after conducting multiple lab investigations and diagnostics. The results revealed she had degeneration of the bio prosthetic valve, which was causing her severe breathlessness. If left untreated, with time it could prove fatal, hence, despite all the challenges, the Cardiac Surgery team at SIMS decided to perform a bio prosthetic tissue valve surgery post ascertaining the fitness of the patient. The 7-hour long surgery proved to be a success and on a post-surgery review the tests conducted upon her showed the excellent functioning of her heart and she is doing well and going about her normal activities”.

Rheumatic heart disease is a clinical condition that is common in India and rare in western world. Though valve repair is the best option, not all valves affected by rheumatic heart disease can be repaired. In scenarios where the heart valve has to be replaced, patient has the choice to choose between mechanical valve and bio-prosthetic (tissue) valve. The mechanical valve may last life long, but patients need to take blood thinners throughout their life and maintain a specific range to avoid complications. Values higher than the range can cause bleeding, while lower values can malfunction of the mechanical valve. On the other hand, bio-prosthetic (tissue) valve implantation will avoid the usage of blood thinners, but these valves have a life of 10 to 12 years after which they need replacement. Researchers across the globe are in search to identify an ideal valve that will last lifelong without blood thinner. Until then, these patients have to be managed efficiently and safely.

Dr Raju Sivasamy, Vice President, SIMS Hospital, in his appreciation said, "These kinds of complex cases are performed only at a few elite medical institutes in the world, because it requires superior surgical skills and latest technology. We are extremely delighted that ours is one such specialised centre with a team of experienced Cardiothoracic Surgeons, Cardiac Anaesthesiologists, skilled Nursing professionals & Technicians and other support team under the stewardship of Dr. V. V. Bashi, who could safely & successfully perform such a rare and high risk surgery, saving the life of the patient and giving her a new lease of life. Also, during COVID 19 Pandemic, SIMS has treated over 3000 COVID patients with dedicated centres across the city and continued performing normal cardiac surgeries, with all requisite precautions to benefit our regular patients”.

DISCOVER DENIM FOR EVERY MOOD AT THE DENIM FESTIVAL!

The Factories arm of B&F business has secured a design and build order from a leading...

Ratnadeep hits a century with the launch of its 100th store