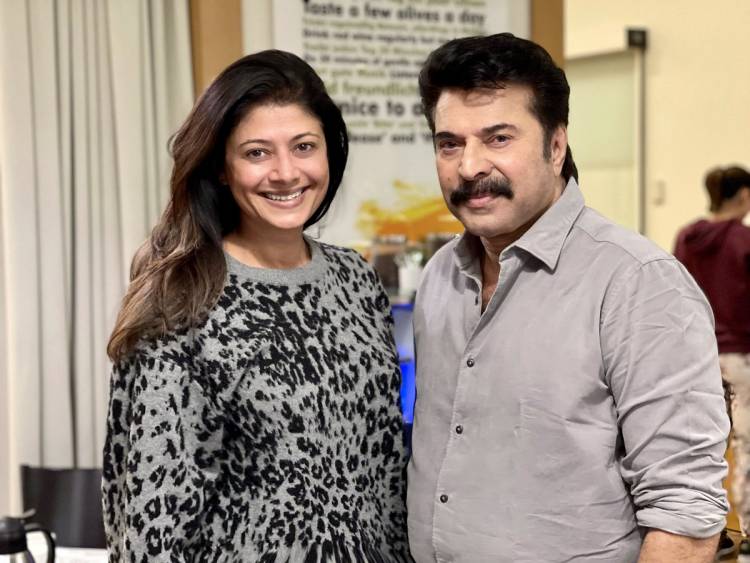 Pooja Batra has been part of only three Malayalam movies, but the diva has managed to leave an everlasting impression upon the cinephiles in Kerala. And recently she bumped into one of her M’town co-stars - Mammootty. The gorgeous actress was apparently vacaying in Hungary with her husband Nawab Shah on her birthday week and during the trip, she met the Megastar. Pooja Batra was thrilled to reunite with her ‘Megham’ co-star and she shared glimpses of their meeting on social media. She also shared that Mammootty didn’t change a bit.
“All the #Megham fans in the house. With one of my fav costars @mammootty So nice to see you after so long. You have not changed a smidge,” Pooja Batra shared.
Mammootty and Pooja Batra posing for a picture together has set the internet ablaze.
Check out Pooja Batra’s post here.

Fans were delighted to see their favourite onscreen couple’s recent meeting. Social media handles were flooded with photos of the duo.
Pooja Batra and Mammootty have acted together in the 1999 film ‘Megham’. Written by T Damodaran, the film was helmed by Priyadarshan. Mammootty essayed the role of Lieutenant Colonel Ravi Varma Thampuran, while Pooja Batra essayed the role of Swathy, his wife.
Pooja Batra’s other Malayalam movies are ‘Chandralekha’ and ‘Daivathinte Makan’.

Meanwhile, Pooja Batra was on a vacation mode. The actress has apparently jetted of to Hungary to celebrate her birthday. She turned 45 on Wednesday (Oct 27). “Thank you All for my Birthday Wishes Albeit they started rolling out a week ago leading up to the 27th. So Humbled and Grateful to see the love from Everyone ,” she said in her post thanking fans for the birthday wishes.
The actress has also shared a few pictures from the vacation with fans. “Home is where Hubby is,” she captioned, sharing a picture with her husband.

“Enjoying Autumn in Budapest,” she captioned, sharing another picture of her from the street.

On the work front, Pooja Batra will be next seen in ‘Squad’.

Priyanka Chopra wears band-aid on her arm in new photo, has a message for fans

Here’s the Title & First look of "Kamali from Nadukkaveri"

The press meet of Karthi-Rakul Preet a Singh starrer DEV was held this evening in...