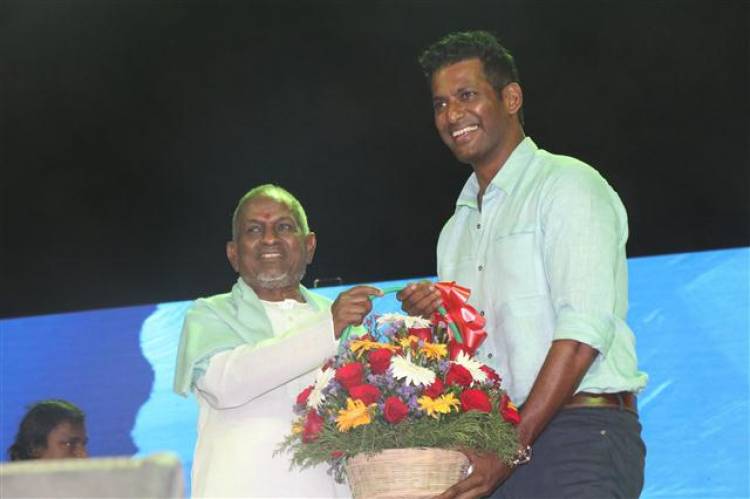 The event of launching the ticket sales for ‘ILAIYARAAJA 75’ happened amidst huge fanfare and crowds at 5th Tamil Nadu International Hot Air Balloon Festival in Mahindra City. All the association and union leaders and representatives along with the office bearers were present for the occasion. Speaking on the occasion, Maestro Ilayaraja said, “I am so much humbled by the love and affection you people have for me. I am so much happy to have this occasion of launching the ticket sales with so much grandeur. I thank each and everyone for making it happen in such a grand manner.”

TFPC President/SIAA Gneral Secretary Vishal said, “When I heard about this occasion, I wasn’t really aware that it would be so much of grandeur. I am spellbound over the grandness and I thank the entire Mahindra City team for giving us an opportunity to be a part of such scenario. Personally, we all felt the need to adore and acclaim a wizard, who has been a a part of our lives, our joy, pains and everything. In fact, his music has been my friend in all situations of my life. Even when I was arrested recently over the issue of TFPC issue, I listens Maestro Ilayaraja sir is the only reason behind it. Whenever I go to foreign countries and everyone asks if I am from Bollywood, I tell them that I come from Tamil industry and the instant name they utter is ILAYARAJA sir. He has been the identity of our entire industry. I feel this is the right time to celebrate his music and I request everyone to come and be part of ILAYARAAJA 75 on February 2 & 3.”

Later interacting with media and press, he said, “February 2 will have the artistes and technicians from other regional industries gracing over the occasion and February 3 will have the performance of our Isaignani Ilayaraja. Apart from using the funds raised through this event for the well being of producers, Ilayaraja sir has promised to donate a part of royalty fund to Tamil Film Producers Council Trust. We will be soon signing officially on the papers regarding this.”

FEFSI President RK Selvamani said, “It’s been 30 years and still I remember the fact that this was the same date, where I got my first song recorded for my film Captain Prabhakaran. It happens to be a great

Actor/ TFPC Vice President Parthiepan said, “The music of Ilayaraja sir is like fuel to our lives. His musical contribution is a pride to every Tamilian.”

Nadigar Sangam President Actor Nasser said, “My name has initial M that denotes my father’s name, but I have another initial that is obviously the song “Thendral Vandhu”. Whenever I enter any events across the world the song is played and I owe him a lot for this. There are many saying that Ilayaraja has composed so many songs, but he cannot be confined or limited to just numbers and he is beyond such attributes.”

#KonjamPesu a magical melody to steal your hearts from...