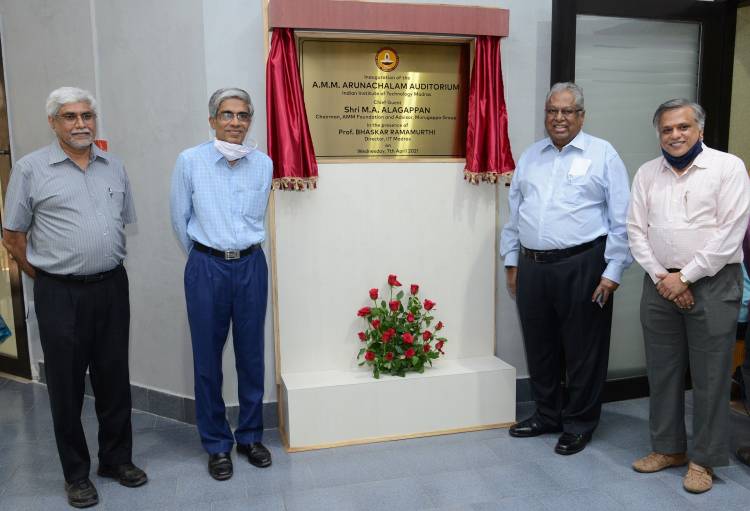 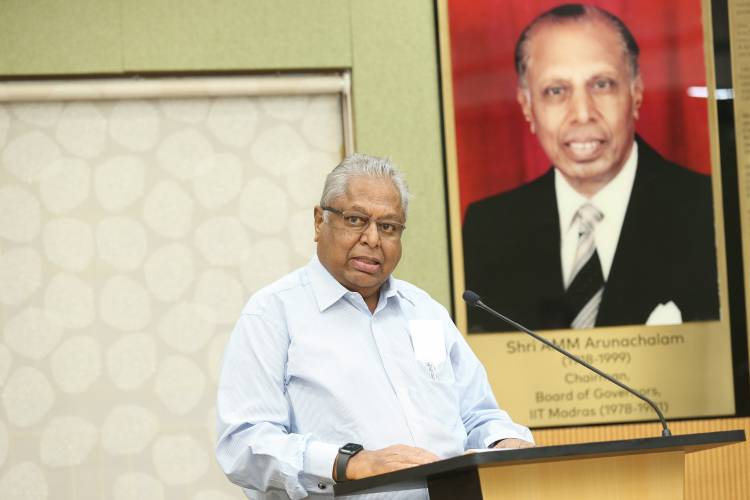 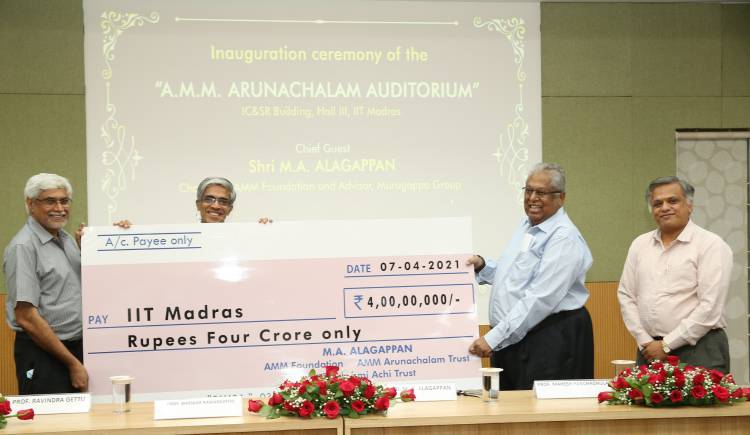 CHENNAI, 7th April 2021: An endowment has been created in IIT Madras in memory of Murugappa Group Patriarch Shri. A.M.M. Arunachalam, who was the Chairman, Board of Governors, IIT Madras (1978-81). Since its formative years, the Murugappa family and Group companies have been generous to IIT Madras and showed a keen interest in its growth and development.

IIT Madras was very close to Shri. A.M.M. Arunachalam’s heart and to the successive generations of his family. To commemorate this association, his son Shri M.A. Alagappan along with the A.M.M. Foundation, has made a benevolent contribution towards naming an auditorium in the Institute after Shri A.M.M. Arunachalam

The auditorium is a modern facility for hosting conferences, workshops and seminars for the benefit of students, researchers and faculty. The endowment is to the tune of Rs. 4 crore.

Addressing the inaugural event, the Chief Guest Mr. M.A. Alagappan, Chairman AMM Foundation and Advisor, Murugappa Group, said, “Knowledge and economic development have always grown together.  And in today’s fast-paced world of ideas, that linkage has become even stronger.  As our country aspires to ‘Make in India”, so too must we aspire to ‘develop in India’ and ‘invent in India’.  Only then can the businesses that ‘Make in India’ also be globally competitive.  While businesses are constantly seeking to innovate in terms of technology, the academic world has the multi-disciplinary expertise that can be harnessed to accelerate the development of new technologies.

Further, Mr. M. Alagappan said, “In this context, IIT Madras through the IC&SR Centre has been a pioneer in facilitating and fostering the links between academia and industry and creating positive results for all stakeholders. The IC&SR Centre’s collaborative approach has helped find solutions to complex technical and techno-commercial challenges in a wide range of areas and with a wide range of partners.  These collaborations offer the faculty and students excellent opportunities to apply and hone their knowledge on real-world problems for the benefit of society at large.

Equipped with vast experience and knowledge in managing diverse businesses, Shri Alagappan has been actively involved with several leading industry associations. He is a Managing Trustee of the AMM Foundation, which runs many schools and hospitals across India. He served as the Executive Chairman of the Murugappa Group from 2006 to 2009, after decades of working in the Group in key leadership positions.

IIT Madras is proud that the former BoG Chairman’s family and their company, the Murugappa Group, continue to contribute to IIT Madras and to the community at large in several impactful ways.

Speaking earlier, Prof. Bhaskar Ramamurthi, Director, IIT Madras, said, “Captains of Industry and doyens of Tamil Nadu like Shri A.M.M. Arunachalam laid the strong foundations for IIT Madras to grow into the Institution of Eminence it is today. Murugappa Group companies have been early partners of IIT Madras in several R&D projects, showing the path of industry-academia collaboration to build strong technological capabilities in the country. We value immensely this endowment in honour of our former Chairman Board of Governors Shri. A.M.M. Arunachalam and take it as an affirmation of the support we have always received from the Murugappa Group.”

Highlighting the strong connect with the Murugappa Group,’ Prof. Mahesh Panchagnula, Dean (Alumni and Corporate Relations), IIT Madras, said, “IIT Madras and Murugappa Group go a long way. Beginning with Mr. Arunachalam who served as the Chairman of our Board, the relationship has resulted in deep collaborations that have been mutually beneficial.”

Shri Arunachalam Murugappa Murugappa Arunachalam, fondly known as ‘AMM,’ was a pillar of Indian society. Born on 1st March 1918 at Pallathur, located in the present day Sivaganga District, he was a sought after business leader and served as Chairman and Board Member of several companies. Shri A. M. M Arunachalam was an active member of society and helped in community development and social welfare.

He contributed a lot towards healthcare and education through the AMM Foundation. He served as the Honorary Consul General for Japan in Madras and received a rare dual honour from His Imperial Majesty, the Emperor of Japan. He was awarded the ‘Order of the Rising Sun, Gold Rays with Rosette’ in 1964 and the ‘Order of the Sacred Treasure, Gold and Silver Star’ in 1998.

Renowned brands like BSA, Hercules, Montra, Mach City, Ballmaster, Ajax, Parry’s, Chola, Gromor, Shanthi Gears and Paramfos are from the Murugappa stable. The Group fosters an environment of professionalism and has a workforce of over 51,000 employees.

Indian Institute of Technology Madras (IITM) was established in 1959 by the Government of India as an ‘Institute of National Importance.’ The activities of the Institute in various fields of Science and Technology are carried out in 16 academic departments and several advanced interdisciplinary research academic centres. The Institute offers undergraduate and postgraduate programmes leading to B.Tech., M.Sc., M.B.A., M.Tech., M.S., and Ph.D., degrees in a variety of specialisations. IITM is a residential institute with more than 580 faculty and 9,500 students. Students from 18 countries are enrolled here. IITM fosters an active entrepreneurial culture with strong curricular support and through the IITM Incubation Cell.

IITM has been ranked No.1 in the ‘Overall’ Category for the second consecutive year in India Ranking 2020 released by National Institutional Ranking Framework, Ministry of Education, Govt. of India. The Institute has also been ranked No.1 in the ‘Engineering Institutions’ category in the same Rankings for five consecutive years – 2016, 2017, 2018, 2019 and 2020. It was also adjudged as the ‘Top innovative Institution’ in the country in Atal Ranking of Institutions on Innovation Achievements (ARIIA) in 2019 and 2020. ARIIA Ranking was launched by the Innovation Cell of Ministry of Education.