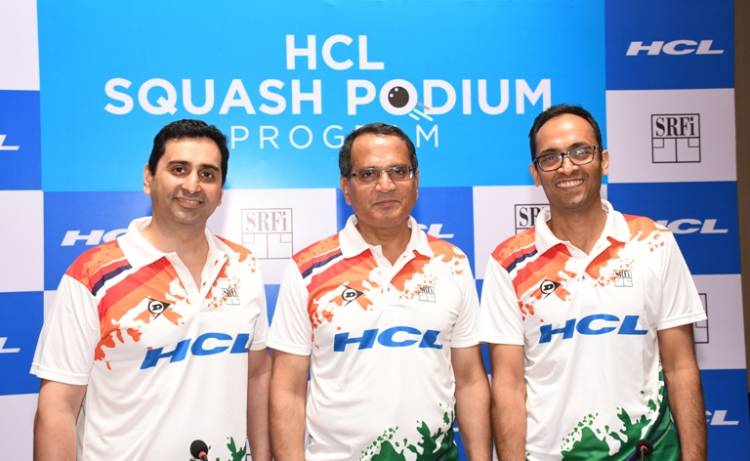 Chennai, May 15, 2019: HCL, a leading global conglomerate, today announced the launch of HCL Squash Podium Program in partnership with the Squash Rackets Federation of India (SRFI) to significantly improve the Squashecosystem in India. The multi-pronged program will focus on driving a 360-degree overhaul in Indian Squash by improving both player (senior and junior) and coaching standards and enhancing the overall prominence of the sport in the country. As part of this initiative, HCL and SRFI will also host the HCL Indian Tour - a Professional Squash Association (PSA) multi-city circuit in the country, giving the Indian players an opportunity to compete against the world’s best on their home turf.

* Multiple coaching camps and referee clinics – HCL and SRFI will work towards capacity-building and skill enhancement for existing Indian coaches and referees and benchmark them to standards recommended by World Squash Federation (WSF). With this HCL and SRFI aim to significantly improve the current number of 13 WSF Level 2 Coaches in the country to help the upcoming Indian players greater access to world-class coaches and enhance their overall performance. HCL and SRFI will also host referee clinics along with each PSA tournament to help improve refereeing standards.

* HCL Indian Tour – HCL and SRFI will organize multi-city PSA tournaments in both men’s and women’s categories to help upcoming players in the country gain international ranking points and climb up the PSA rankings.These tournaments will also offer a larger number of Indian players the opportunity to compete against some of the best international players without making the investment of travelling to international locations.

* HCL Indian Junior Open –the annual flagship event in the junior category by HCL will now be organized as a Platinum event under the Asian Squash Federation (ASF) calendar (the highest level championship in the Asian Circuit) and will be rated as a Six-star tournament by SRFI. The top players from this tournament will receive ranking points which will add up to their junior Asian rankings in the relevant age group.

* HCL High Performance Camps – half-yearly, two-week performance camps for 32 shortlisted junior players with top national and international coaches. These camps will be geared towards improving game tactics, strength and conditioning and will also focus on nutritional direction and psychological counselling. Individual player assessment reports will be created during these camps by leveraging sports science, to offer customized guidance to each player and help them perform better against their international counterparts.

Announcing the HCL Squash Podium Program, Sundar Mahalingam, Chief Strategy Officer, HCL Corporation said,“HCL has been supporting Squash for over three years now by creating world-class individual tournaments. As an organization, HCL believes in driving deep impact in the areas that we support and therefore we are now strengthening our commitment to the sport with the aim of significantly enhancing the existing Squash ecosystem in the country. This will require long-term investment covering a breadth of areas including tournaments, coaching and mental and physical fitness of the players. I am hopeful that the combined efforts of HCL and SRFI will help promising players emerge as the next stars of Indian Squash on the global stage.”

Mr. Debendranath Sarangi, President SRFI said,“Indian Squash has grabbed a lot of attention in the recent years with players like Joshna Chinappa and Saurav Ghoshal securing important international wins for the country. However, there are only three Indian players in Top 50 PSA rankings in the world today (including Joshna and Saurav). To ensure that Indian Squash not only continues its success but emerges at the top, it is important that the next rung of players get the right exposure both in terms of quality of tournaments as well as coaching. With HCL, we have found common synergies in terms of our goals for Indian Squash. I am confident that through our combined efforts we will enable India take its rightful place in the pantheon of great squash playing nations.”

HCL has been supporting Squash in the country for over three years now and has been organizing HCL Junior Squash tournament since 2016. HCL scaled-up its efforts by partnering with SRFI to organize the HCL Senior National Squash Championship in 2017 and again in 2018.

Last month, Saurav Ghoshal became the first Indian male squash player to enter the top 10 in the latest PSA world rankings. Egypt's world champion Ali Farag, meanwhile, maintains his position at the top of the ladder. The other Indian male in the top 50 is Ramit Tandon (49).

In the women's rankings, Joshna Chinappa continues to be the best-ranked Indian, moving up to the 15th position. Dipika Palllikal Karthik had earlier become the first Indian woman to be ranked 10, she is currently ranked 73 as she has not being playing competitive squash since October 2018.

Paytm has also introduced an 'Information and Help centre' on its app under its...

Come and savor some of the world famous Cherries from the...

On the occasion of International Youth ......