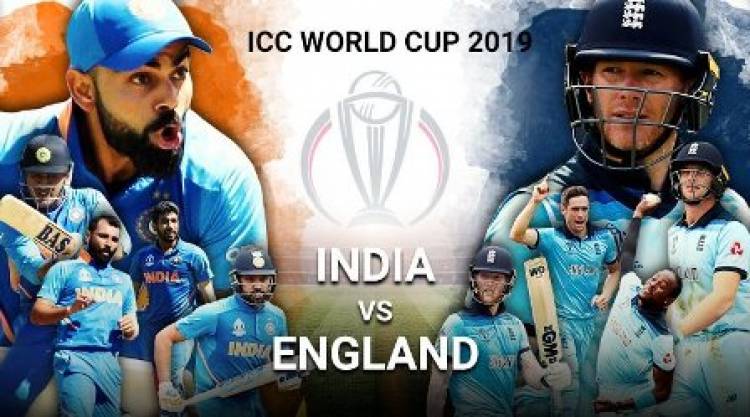 England handed India their first defeat in the ongoing ICC Men's Cricket World Cup as they defeated Men in Blue by 31 runs here at Edgbaston on Sunday.

As a result of this win, England have now moved to the third position in the tournaments standing. They have ten points in eight matches. While India remains at the second spot with 11 points.

Chasing a huge target of 338, India started slowly and lost KL Rahul early in the 3rd over. Rahul could not score a single run and was caught-and-bowled by Chris Woakes. Woakes bowled on the good line and length and did not allow batsmen to score freely. In-form Woakes bowled his first three overs without conceding a run.

Rohit Sharma was also given a reprieve early on as he was dropped by Joe Root in the 2nd over when he was just at the score of four.

Virat Kohli and Rohit stitched a well-compiled partnership of 138 runs, which saw both Sharma and Kohli bringing up their half-centuries. Kohli became the first skipper in the history of World Cup cricket to register five-consecutive fifties. But as soon as India started to gain an upper hand in the match, the team were given a big blow as Kohli (66) was dismissed by Liam Plunkett, reducing India to 146/2.

After the departure of Kohli, left-handed batsman Rishabh Pant joined Sharma in the middle. Rohit and Pant built a 52-run partnership, which saw Sharma registering his third century of the ongoing World Cup.

But in trying to accelerate the innings, Sharma (102) perished in the 37th over as Woakes dismissed him. Rohit became the first batsman to amass three centuries in the tournament so far.

Hardik Pandya came out to bat next, and he started playing in an aggressive fashion from the very start. He and Pant put up a brief 28-run stand, but Woakes' brilliance dismissed Pant (32) in the 40th over to peg India back. Pant was looking for his favourite walk-across-hoick to square leg, it was then that Woakes took a stunning grab to reduce India to 226/4.

Trying to cope with the required run rate, Pandya (45) perished in the 46th over. India still required the 71 runs for the win.

Dhoni and Kedar Jadhav played in a baffling manner as they did not show any intention of going for the win. The duo just kept on taking singles and this resulted in India's loss by 31 runs.

Earlier, after opting to bat first, England openers Jason Roy and Jonny Bairstow provided an exceptional start to the hosts. The duo played cautiously in the first five overs, but once both the batsmen got their eyes in, they started to hammer the India bowlers to all around the park.

Roy and Bairstow did not let any bowler settle on the crease and they took a special liking to the spinners. The duo went on to a stitch a partnership of 160 runs, which saw both Roy and Bairstow bringing up their respective half-centuries.

India finally got their much-needed breakthrough in the 23rd over as Kuldeep Yadav sent Roy (66) back to the pavilion, reducing England to 160/1.

Bairstow registered his first World Cup century in the 26th over of the England innings. But after reaching this landmark, the batsman slowed down, and this took a toll on Bairstow (111) as he was dismissed by Mohammed Shami in the 32nd over. Skipper Eoin Morgan (1) once again failed to leave a mark, as he was sent back to the pavilion by Mohammad Shami. Shami bowled a short ball and Morgan was not able to control the pull shot, reducing England to 207/3 in the 34th over.

Joe Root and Ben Stokes then took the honours upon themselves and the latter looked in fierce form as he kept on smashing Indian bowlers for regular boundaries in the death overs. The duo stitched together a partnership of 70 runs, but Shami once again provided India with the crucial breakthrough as he dismissed Root (44) in the 45th over.

Stokes brought up his half-century in the 45th over, and as a result, he brought up his third consecutive fifty-plus score in the tournament. Buttler played a cameo of 20 runs off just eight balls to take the England score past 300-mark with three overs still left. Buttler was sent back to the pavilion by Shami.Shami sent Woakes (7) back to the pavilion in the penultimate over and this wicket marked his five-wicket haul in the match. However, Stokes kept on playing in his attacking style and he ensured England goes past the 330-run mark.

Bairstow was the top-scorer for England as he played a knock of 111 runs whereas Shami took the maximum wickets for India as he scalped three England batsmen. This is the third consecutive match, in which Shami has taken four wickets in an innings. Shami has now moved to the fifth spot in the leading wicket-takers standings in this World Cup. The bowler has 13 wickets in just three matches.Yuzvendra Chahal conceded 88 runs from his ten overs and as a result, he completed his most expensive bowling spell in ODIs.

India will next play against Bangladesh on July 2, while England will take on New Zealand on July 3.