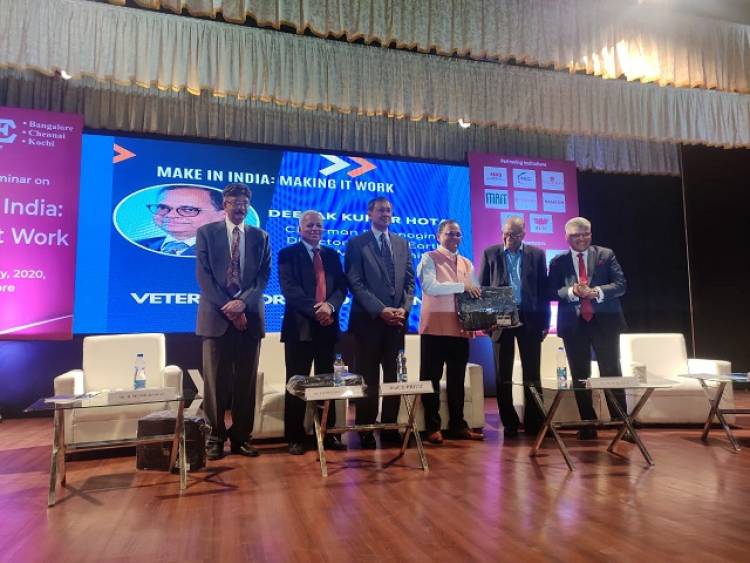 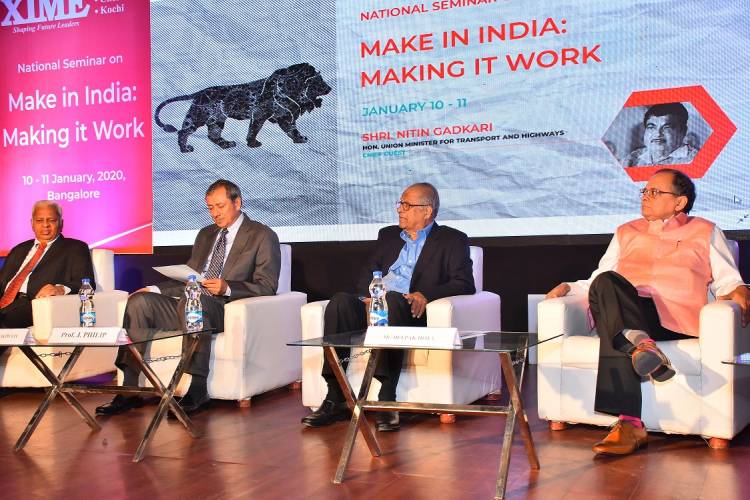 The two-day National Conference on “Make in India” was organized by XIME, one of India’s leading Business Schools at its campus today. The seminar was inaugurated by the Guest of Honour, Dr. Jaimini Bhagwati, IFS (Retd.) & Former Indian High Commissioner to the UK, in the presence of Mr. B. Muthuraman, Former Vice Chairman, TATA Steel, Prof. Philip, Founder & Chairman, XIME, Deepak Hota, CMD, BEML and Kamal Bali, President & MD, Volvo. The conference was planned with an aim to ideate on the policy of Make in India as an effective instrument to enhance GDP.

While inaugurating and sharing his thoughts on National Conference at XIME, Dr. Jaimini Bhagwati, IFS (Retd.) & Former Indian High Commissioner to the UK, said “Manufacturing sector, undoubtedly, contributes much towards creating employment opportunities. The Indian Economy is connected through Industry (30%), Services (55%) and Agriculture (15%). There are a lot of ambition of increasing manufacturing share from 16% to 25% of GDP in next few years. Indian diaspora can only emerge as successful when it participates more in global value-added chains. For this, startups need to be fostered more in the ecosystem as they can be prime-movers for India’s growth.”

Through this initiative, XIME wishes to focus on ideation and discussion with leading industry stalwarts to get the deliverables of the Indian manufacturing industry right, as it is not just the extension of machine age but integration of  manufacturing, AI and information technology and avoid the problems which China went through like ecological deterioration, protect biological diversity, create new energy resources.

There are certain prerequisites where Government initiatives such as reliable efficient
power and transportation are important. India has potential along its cost lines. Despite the hurdles of land acquisition and labor legislation, India can be a leading manufacturing hub. The current size of India’s labour force is 500 million and 80% of them are self-employed. The population at large is not unemployed but underemployed. Make in India is thus an opportunity for the rest of the world to set up its manufacturing and servicing hubs to cater to customers across the globe. It is interesting to note here that, as labor cost is on the increase in China, India may succeed in attracting foreign investment into manufacturing. India still needs to fix few segments of problems relating to land and labour law, interest rate, industry 4.0.

Mr. B. Muthuraman, Former Vice Chairman, TATA Steel emphasized, “The make in India initiative needs to be seen in the context that there is no large populous country in the world which has become prosperous without going through domestic manufacturing dominance”.

Sharing his thoughts on conducting a National Seminar on Make in India, Prof J. Philip Chairman, XIME & Former Director, IIM Bangalore said, “We, at XIME, believe that B schools play a huge role to make Make in India a success and thus, we have come up with this National Seminar. We aim to highlight the heroic initiative undertaken by the Government of India called ‘Make in India’ and understand the gaps of the initiative at large. This initiative of ours has been lauded by both the Government as well as administrative systems. Also, our aim while hosting this conference on Make in India was to identify the gaps in the national campaign and work towards identifying then rectifying them together with the leaders from the industry. The conference had an interesting list of corporates sharing some of their best practices and valuable messages to examine the initiative.”

The Two-day seminar opened up solutions to challenges like Dispute Resolution Mechanism, contract uncertainties, labour laws, government policies and approvals, skilling of workforce to be ready for Industry 4.0. The opening session was graced by brilliance and intellectual thoughts from leaders across different industries.