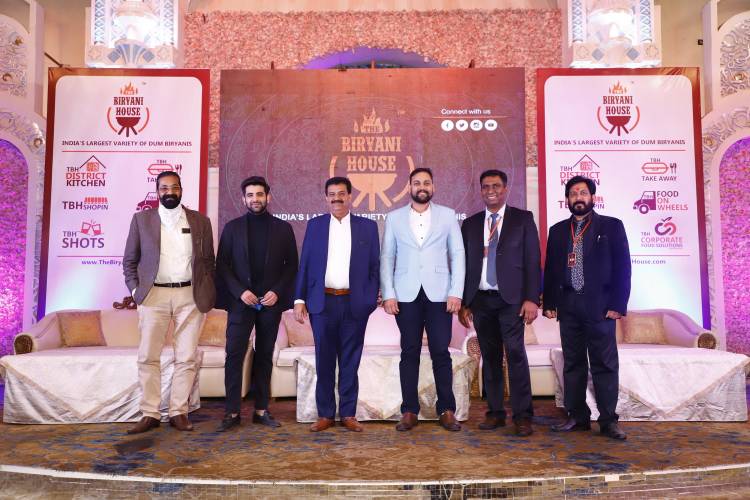 09th January 2021, Gurugram: The Biryani house, India’s fastest upcoming Cloud kitchen Platform conducted a Franchise/Investors meet at BLISS Premiere in Gurugram today. The Biryani House regulated this meet to discuss the possible prospects with investors for becoming the part of one of the fastest-growing F&B Company.

During the event, The Biryani House also announced the launching of their Master Cloud Kitchen in Gurugram. The brand targets to open 50-60 outlets in Gurugram and Faridabad region in the next 2-3 months and have already signed few retail outlets. The brand envisions that by the time of the launching there would be 18-20 operational outlets.

The Biryani House is India’s only organization that offers more than 50 varieties of Dum Biryani's. In 2015, The Biryani House started their first outlet in Kalyan, Maharashtra, and started catering locals with the most delicious Biryani at a very reasonable price. They intend to make their presence in major cities of India and will soon open in Delhi, Gurugram, Noida, Ghaziabad, Varanasi & Lucknow.

Mr. Sarvesh Chaubey, Chairman, The Biryani House said that “ Through this meet, we look forward to inflating aggressively and make The Biryani House a well-established brand. This meet-up has really helped us in meeting the potential investors for our franchise model, and our brand definitely guarantees hot benefits for the investors.

Mr. Sanjeev Kumar, Master Franchise, Gurugram said that  "We are delighted and looking forward for establishing the Master Franchise Kitchen of The Biryani House in Gurugram. Our vision is to open more than 50 outlets in Gurugram region in upcoming quarter. We will work hard to offer the fresh, hot, and sizzling bowls of Biryani and platters of mouth-watering kebabs to everyone.”

The Biryani House has a forceful expansion plan and is all set to expand its footprint PAN India. They have a presence in Bahrain and Singapore and also planning to explore other international markets soon.

About The Biryani House

The Biryani House started its first outlet in Mumbai, Maharashtra with a very small team. They worked on different Biryani flavors and developed a menu of more than 50 varieties of Dum Biryanis. They maintained the existing outlet as the main kitchen and opened a QSR delivery outlet in Mumbai. Since its very inception “The Biryani House” has been an organization that is based on honesty and integrity which specializes in providing India’s Largest Variety of Dum Biryani. Their success is the result of the hard work and education of the whole team – which makes The Biryani House one of the fastest-growing, process-oriented, asset-light F&B Company since 2015.

Occurrences of cases of counterfeiting and smuggling much more than reported: Special...

Child Rights and You (CRY) one of India’s leading NGO’s working on child rights...

Health & Glow, the beauty destination of India, has relaunched their Express Avenue...