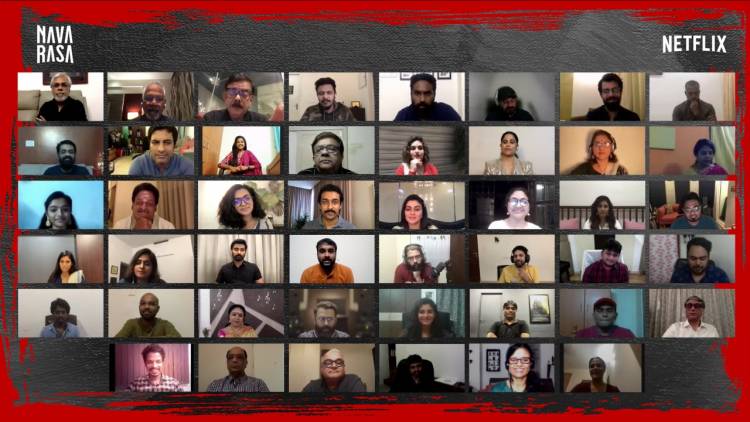 Ahead of the highly anticipated release of its biggest Anthology Navarasa, Netflix hosts a global musical fan event with the entire Tamil industry, coming together and presenting a heart-touching symphony of the nine human emotions represented in the film

Thursday, August 5, 2021: The countdown to the launch has  begun and fans across the world are waiting for the global launch of Navarasa, the biggest anthology film by Netflix. To add to the excitement and give everyone a taste of the nine emotions showcased in the film, Netflix hosted the ultimate global fan event - “SYMPHONY OF EMOTIONS” - a confluence of talent, emotions and music.

Fans and media from across the world tuned into the virtual gala, with the cast and crew of this path-breaking film. The film marks a glorious and unmatched moment for entertainment in India bringing together the Tamil film industry led by iconic filmmakers Mani Ratnam and Jayendra Panchapakesan. Symphony Of Emotions kicked off with a heartfelt address by Dhivyadharshini who thanked the fans for being there and supporting the creators in this journey. The event was a fundraiser to support the musicians performing film music on-stage whose livelihoods were adversely impacted  by Covid-19. It was a culmination of the efforts made by the actors and makers of Navarasa who did the project pro-bono, donating their fee to relief efforts.

Fans not only got a chance to see the powerhouse of talent up close, they also witnessed power-packed performances. True to its name, Symphony Of Emotions showcased acts by extremely talented musicians from across the industry. These include flute virtuoso Naveen Kumar, Abhishek Kumar, K C Loy, Viveick Rajagopalan, Piyush Rajani & The Fine Tuners, Mahesh Raghvan, Nandini Shankar, Saasha Tirupathi, Anantha R Krishnan, Ricky Kej, Kunal Naik and headlined by a 50-member voice choir performance led by the living legend A R Rahman.

The creators, actors, directors, and musicians from various segments of the anthology joined the event virtually and indulged in banter, and engaging conversations throughout the evening. Fueling the Navarasa love, 46 graced the screens and shared interesting anecdotes from their filming experience.

Addressing the crowd gathered for the celebration Mani Ratnam said, “We are thankful to everyone that has joined this evening and we are proud of the work that all the talent has done on the film. Navarasa has been a pleasure because we were in capable hands. ”

Adding to it Jayendra Panchapakesan said, “The directors, actors and technicians worked through the intense second wave of Covid-19 and everyone put their heart and soul into this project. We wanted to make lots of films to support more people and wanted more people in the industry to participate in it. In fact Mani even suggested  that we should find a 10th rasa if that means bringing more people on board.”

Based on nine rasas or human emotions - anger, compassion, courage, disgust, fear, laughter, love, peace and wonder - Navarasa is the coming together of the spectacular creative community of Tamil cinema, marking a larger than life cultural moment for the entertainment industry in India.

Netflix is the world's leading streaming entertainment service with over 209 million paid memberships in over 190 countries enjoying TV series, documentaries and feature films across a wide variety of genres and languages. Members can watch as much as they want, anytime, anywhere, on any internet-connected screen. Members can play, pause and resume watching, all without commercials or commitments.

4 M+ VIEWS and counting for #EppaPaarthaalum