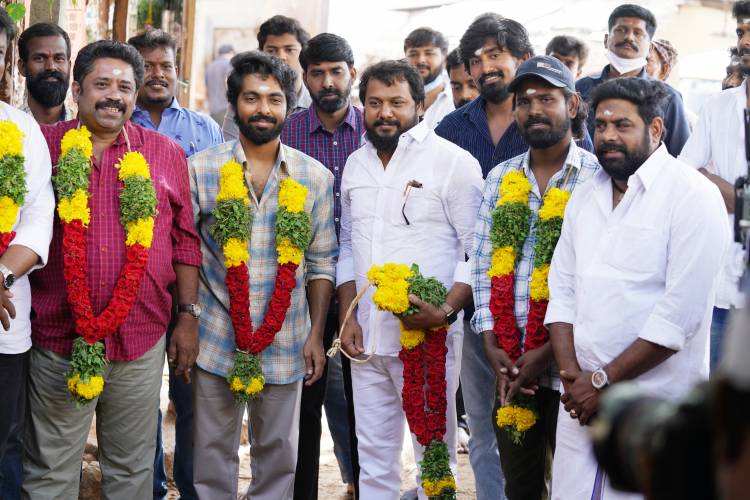 Producer Kalaimagan Mubarak of Skyman Films International, who is producing numerous projects in Kollywood, has launched “Production No.2” that started rolling today (August 2, 2021). The yet-to-be-titled movie features GV Prakash-Gayathrie in lead roles, is directed by National award-winning filmmaker Seenu Ramasamy. The shooting commenced this morning with a ritual ceremony held at Lord Vinayagar Temple in Andipatti, with producer Kalaimagan Mubarak switching on the camera for the first shot.

Producer Kalaimagan Mubarak, Skyman Films International, says, “It’s an auspicious day to start our “Production No:2” with a spiritual interference. I am happy to be associated with a team of powerhouse talents like Seenu Ramasamy, who has captured the hearts of the Pan-Indian audience for the essence of naturalness and realism in his movies. To have a content-driven star-like GV Prakash in this movie is a huge emblazonment to this action-thriller.  Gayathrie keeps exhibiting her prowess performance in every film she works in, and I am happy to have her on board for this movie. The first schedule is planned for 25 days continuously. We are strictly following the health protocols involving the current pandemic crisis. I’m confident that the movie will offer a new kind of experience to the audience, for they will be witnessing this genre set in rural backdrops for the first time.”

Speaking about his production commitments, Producer Kalaimagan Mubarak adds, “As a producer, I feel that my job isn’t confined merely towards funding. I always believe in making sure that the final draft of a script is at its best. Well, I don’t interfere with the creative freedom of filmmakers. Instead, ensure that they get enough space and time to add the essential elements that the script needs to reach perfection. Besides, the shooting phase is more prominent for any producer, and I am no exception. I make sure that every process on the sets proceeds smoothly. More than all, it’s a big challenge to market and promote the film during its release stage, which demands lots of energy and an open mind. I keep learning all these aspects with every project and implement them so that every movie that I produce gets a warm welcome. Currently, we are working towards the release of Velan starring Mugen Rao in the lead role. We are finalizing a couple of scripts and will be announcing them soon.”

NR Raghunanthan is composing music, and Vairamuthu is penning lyrics.