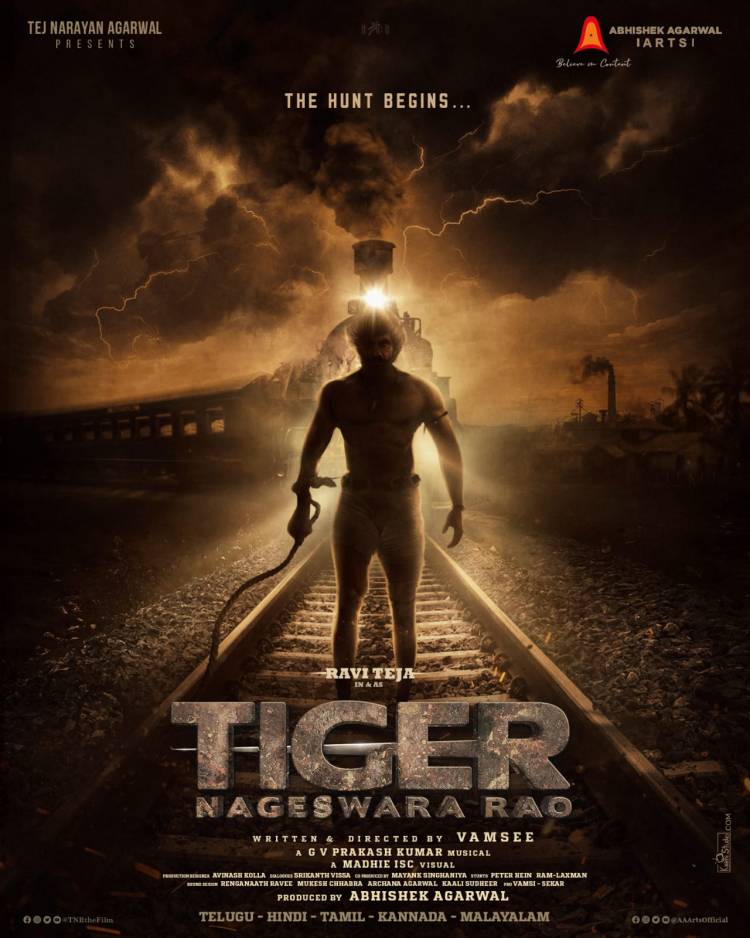 Mass Maharaja Ravi Teja is al set to make his Pan India debut with his next project titled Tiger Nageswara Rao to be directed by Vamsee. The prestigious project of producer Abhishek Agarwal of the critically acclaimed and commercial blockbuster movie The Kashmir Files fame will be mounted on a high budget under Abhishek Agarwal Arts, while Tej Narayan Agarwal presents it.

On the auspicious occasion of Ugadi, the film’s pre-look poster has been dropped, along with the motion poster. As the train fast approaches, Ravi Teja is daring enough to stand on railway track and his look in the poster is astounding. Ravi Teja looks like a badass here, as he goes shirtless and shows his masculine body. He is all set for the big action, as he arrives with a whip in his hand. The physical makeover for this powerful character is incredible.

The motions poster is also mass-appealing with wonderful background score from GV Prakash Kumar. The visuals are top-class.

Ravi Teja’s body language, diction and getup will be completely different and it will be never before character for the actor. Nupur Sanon and Gayathri Bharadwaj are roped into play the leading ladies opposite Ravi Teja in the movie.

Tiger Nageswara Rao will have its grand launching event today in Novatel at HICC, Madhapur. Megastar Chiranjeevi will be attending the event as a chief guest. The film will be made in Telugu, Tamil, Kannada, Malayalam and Hindi languages.

Coming to technical crew, R Madhie ISC is the cinematographer and GV Prakash Kumar takes care of music. Avinash Kolla is the production designer. Srikanth Vissa is the dialogue writer, while Mayank Singhaniya is the co-producer.