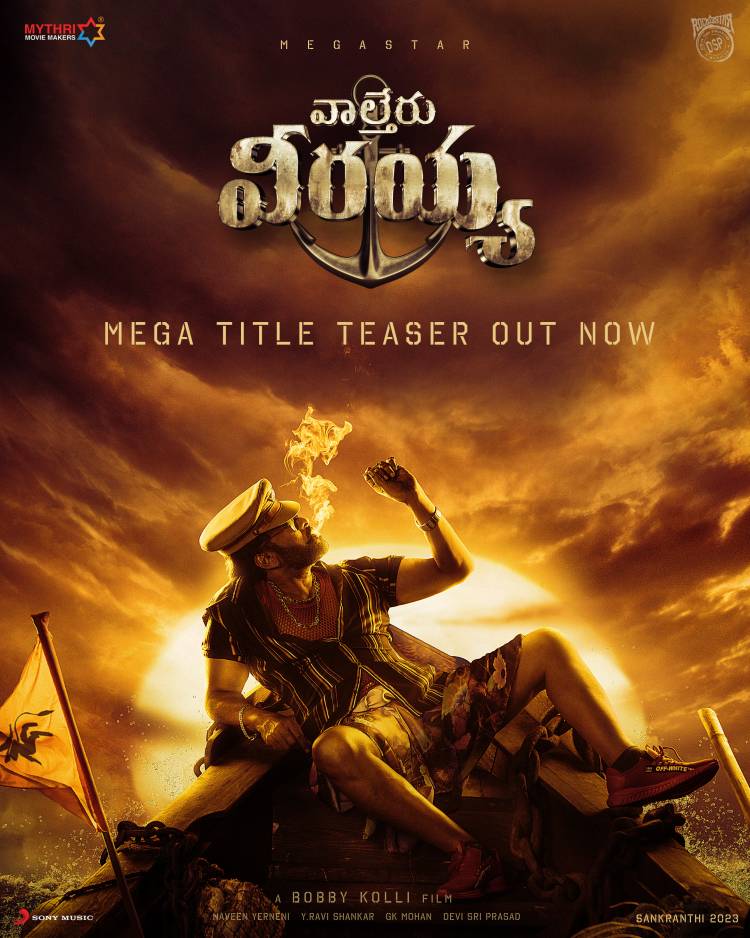 The makers of megastar Chiranjeevi’s Mega154 offered a sparkle before Diwali with a small glimpse of Mega154 and it made everyone anticipate curiously for the real Diwali blast. The wait is over, as they released the title teaser of the movie.

A powerful title Waltair Veerayya is finalized for the movie being directed by Chiranjeevi’s hard-core fan Bobby (KS Ravindra). There are some elements fans expect from Chiranjeevi’s movies and Bobby seems to be readying a full meal feast for them.

The title teaser starts off with a villain sitting in a huge ship making a mockery of Waltair Veerayya. Then, comes the megastar and sets the ship on fire, to give a fitting reply. This indeed is the kind of intro one expects in the crazy combo of Chiranjeevi and Bobby.

We must say that vintage Chiranjeevi is back. His get-up, walking style, body language, and characterization brings back memories of Chiranjeevi’s iconic characters from yesteryear blockbusters. Although mass maharaja Ravi Teja can’t be seen he sends Diwali wishes, besides announcing the release date. Waltair Veerayya will be releasing for Sankranthi, 2023.

Arthur A Wilson’s camera work is top-notch, whereas Rockstar Devi Sri Prasad has fired up the visuals with his background score. The production design of Mythri Movie Makers are high in standard.

Shruti Haasan is the leading lady opposite Chiranjeevi in the film billed to be a mass-action entertainer laced with all the commercial ingredients. The film is produced on a grand scale by Naveen Yerneni and Y Ravi Shankar of Mythri Movie Makers, while GK Mohan is the co-producer.

Niranjan Devaramane is the editor and AS Prakash is the production designer. Sushmita Konidela is the costume designer.

While the story and dialogue were written by Bobby himself, Kona Venkat and K Chakravarthy Reddy penned the screenplay. The writing department also includes Hari Mohana Krishna and Vineeth Potluri.