It is with immense pleasure and satisfaction that I’m delivering this note now, upon the success of Dikkiloona. 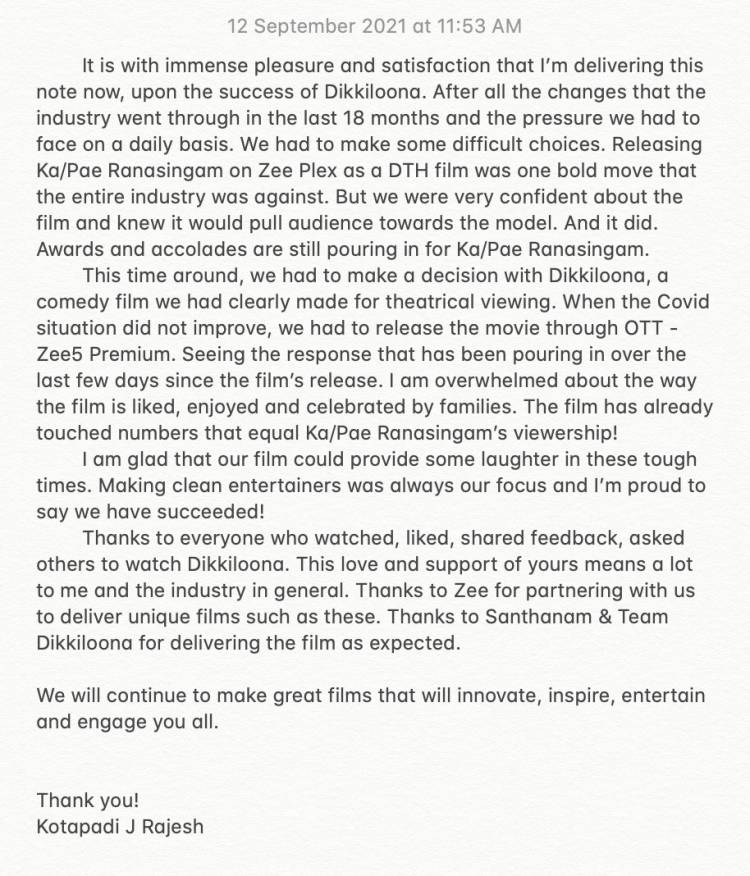 It is with immense pleasure and satisfaction that I’m delivering this note now, upon the success of Dikkiloona.

It is with immense pleasure and satisfaction that I’m delivering this note now, upon the success of Dikkiloona. After all the changes that the industry went through in the last 18 months and the pressure we had to face on a daily basis. We had to make some difficult choices. Releasing Ka/Pae Ranasingam on Zee Plex as a DTH film was one bold move that the entire industry was against. But we were very confident about the film and knew it would pull audience towards the model. And it did. Awards and accolades are still pouring in for Ka/Pae Ranasingam.
This time around, we had to make a decision with Dikkiloona, a comedy film we had clearly made for theatrical viewing. When the Covid situation did not improve, we had to release the movie through OTT - Zee5 Premium. Seeing the response that has been pouring in over the last few days since the film’s release. I am overwhelmed about the way the film is liked, enjoyed and celebrated by families. The film has already touched numbers that equal Ka/Pae Ranasingam’s viewership!
I am glad that our film could provide some laughter in these tough times. Making clean entertainers was always our focus and I’m proud to say we have succeeded!
Thanks to everyone who watched, liked, shared feedback, asked others to watch Dikkiloona. This love and support of yours means a lot to me and the industry in general. Thanks to Zee for partnering with us to deliver unique films such as these. Thanks to Santhanam & Team Dikkiloona for delivering the film as expected.

We will continue to make great films that will innovate, inspire, entertain and engage you all.

Here it's the interesting trailer of #ChooMandhirakaali