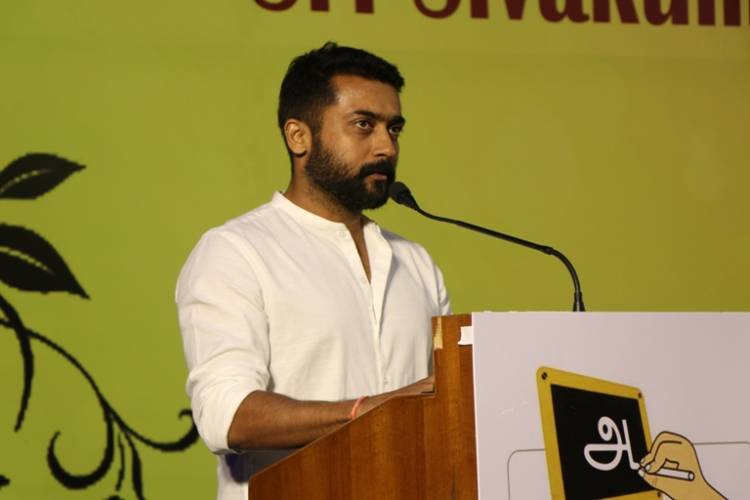 Actor Suriya spoke to journalists at a press conference held by the Agaram Foundation on the National Education Policy Draft. In which he said, "The Federal Government issued National Educational Policy Report which still did not join the awareness, which is why the press meet was held. The Central Government issued the Educational Policy Report until 3rd Standard, first entrance exam, giving equal importance to education by selecting the options equivalently. This is a matter of the lives 30 Crore students so this can change only if parents and teachers take initiatives to ensure the right Education for their children.

Schools being handled by single teachers are currently closed, so that children who are studying there can make choices based on such policies. Three languages are imposed in early education, and public school students are most vulnerable to the imposition of such languages, as such schools are not available to students. If there is a general election from the 5th Standard onwards, the suspension will increase, with about 6.5 crore students suspended from school. 60% of the students are studying in government schools, it is very important to discuss the new education policy, there are not enough teachers in government schools.

Not only schools but also admission to the College of Arts and Sciences. However, students can not prepare for the entrance exam if they fail to take a job and if they fail their exams, how can the students get educated? By increasing private coaching centers through admissions, private tuition schools are earning over Rs.5000 crore all over the nation. If this is the scenario, then schools and colleges will be of no importance" concludes Actor Suriya

FRIENDSHIP + LOVE + ACTION + SENTIMENT all mixed in a right...

Entertainer #KalathilSandhippom is coming out to screens this FEB 5 ..........