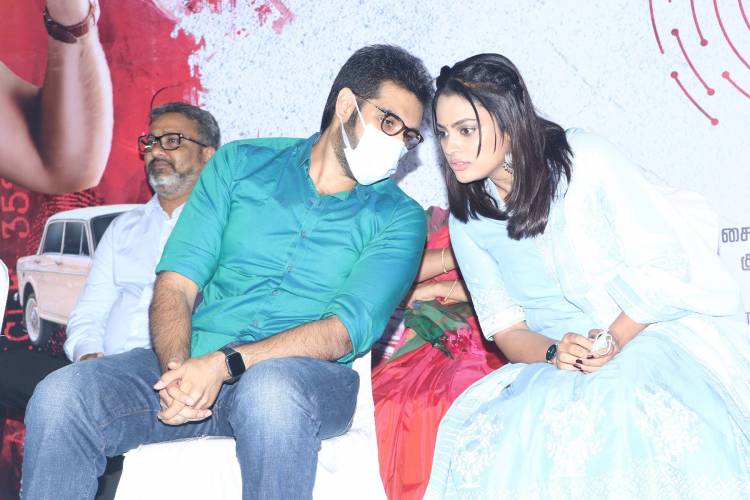 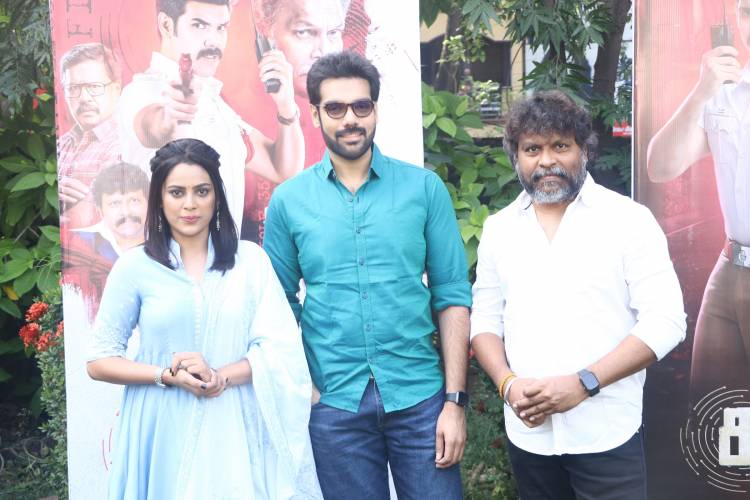 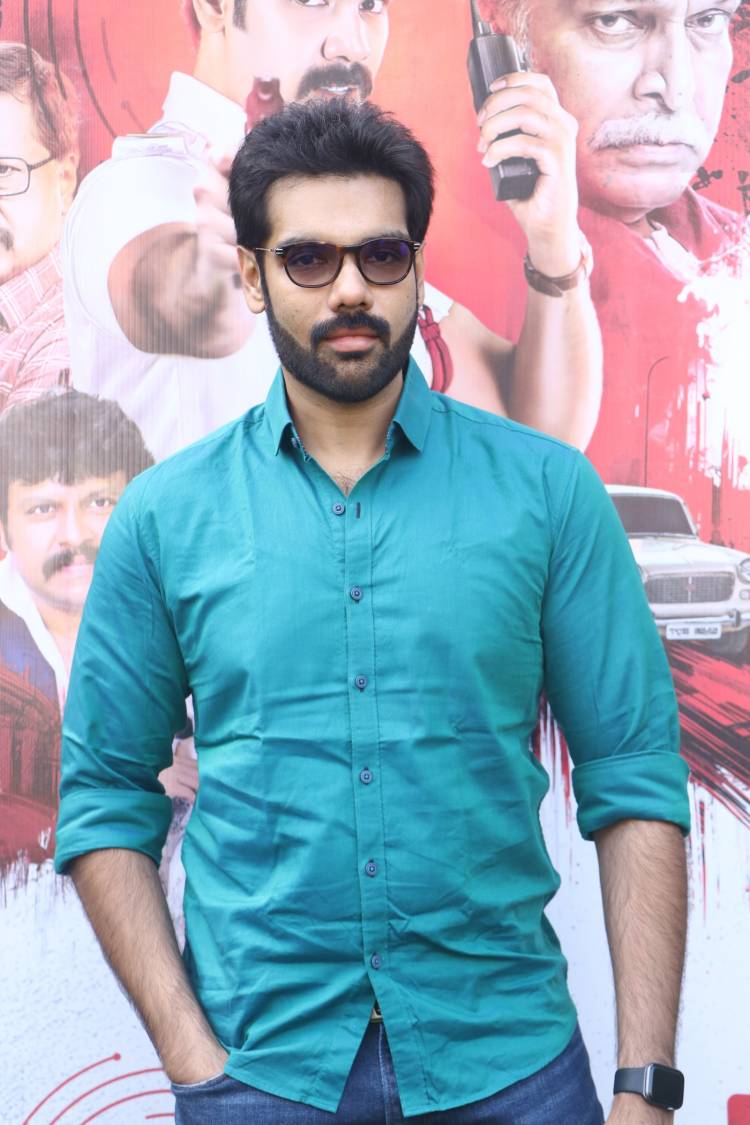 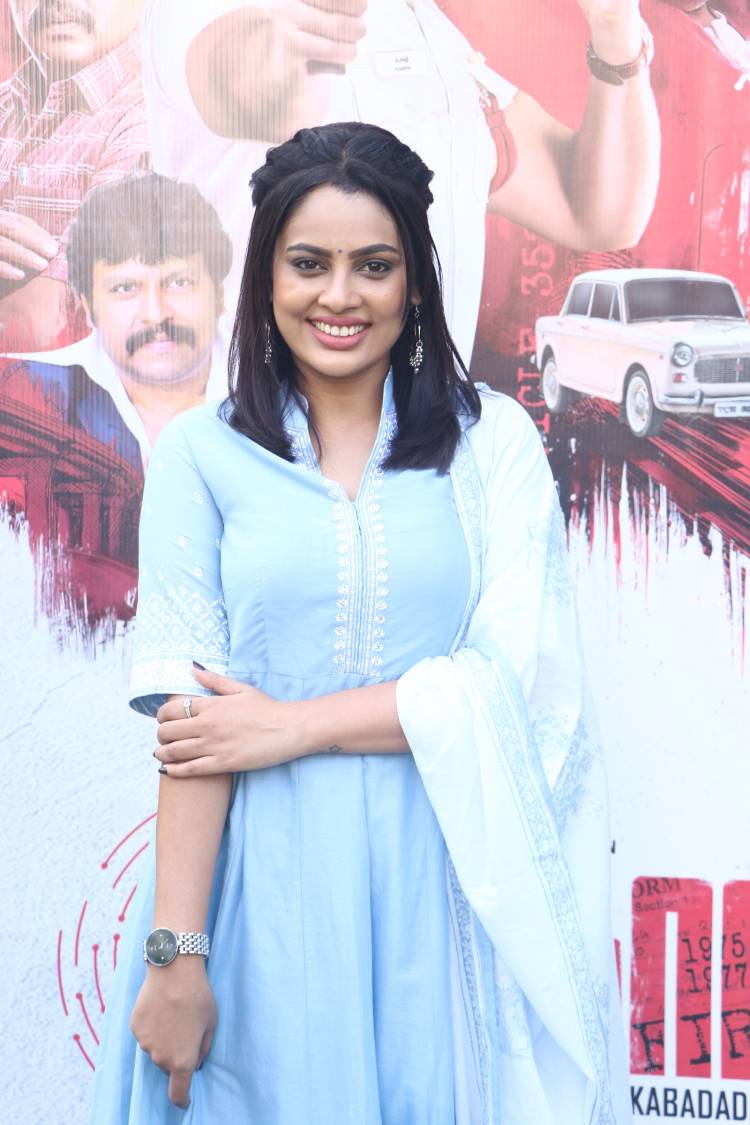 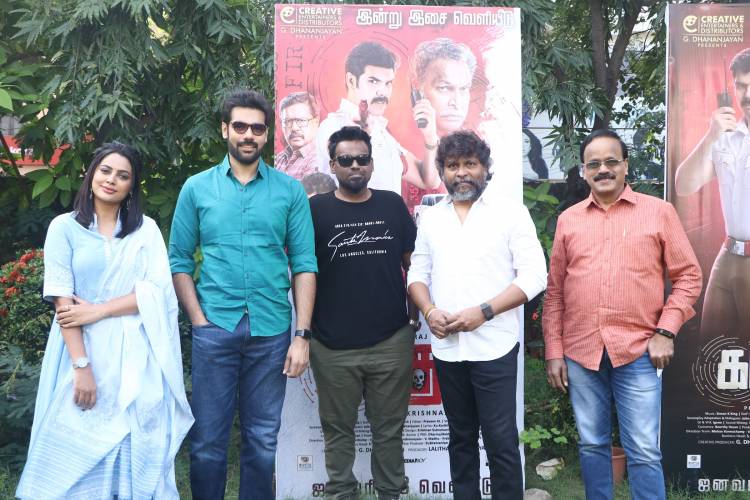 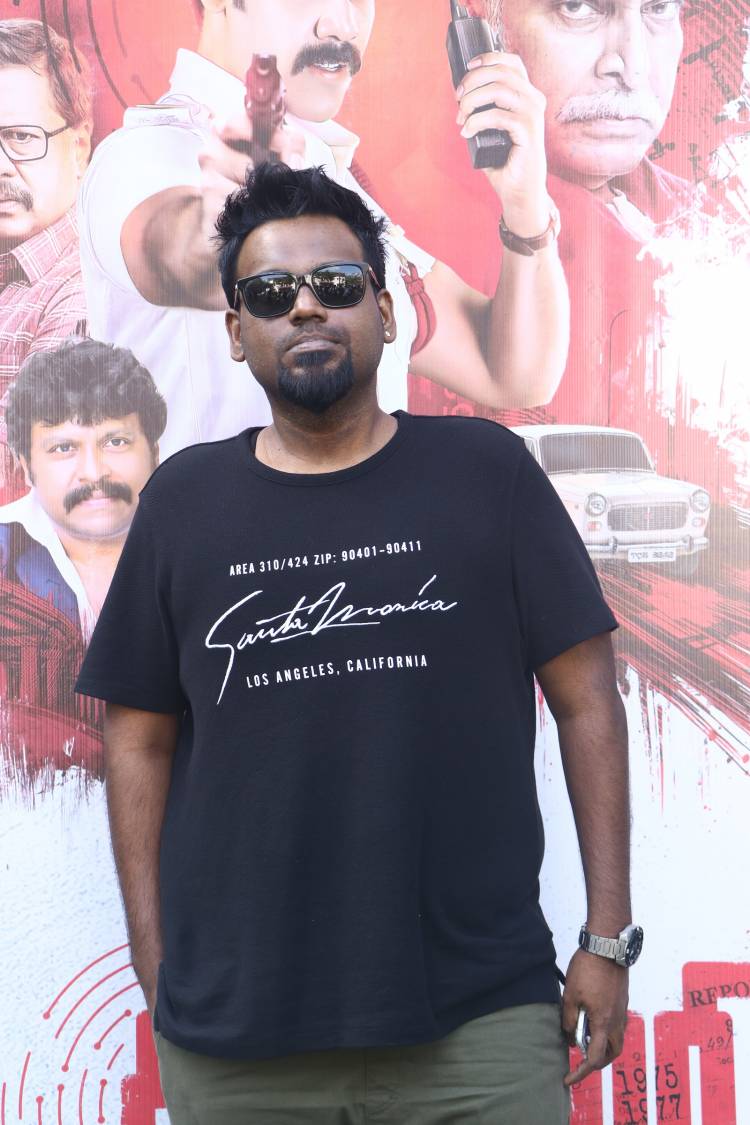 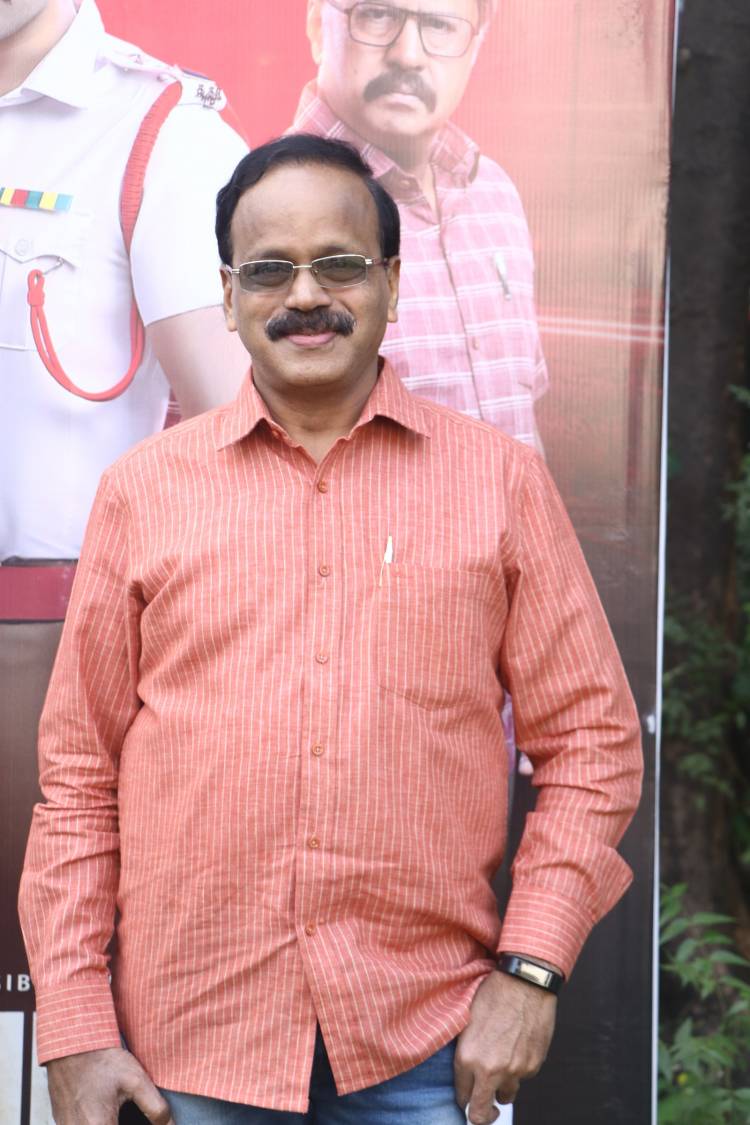 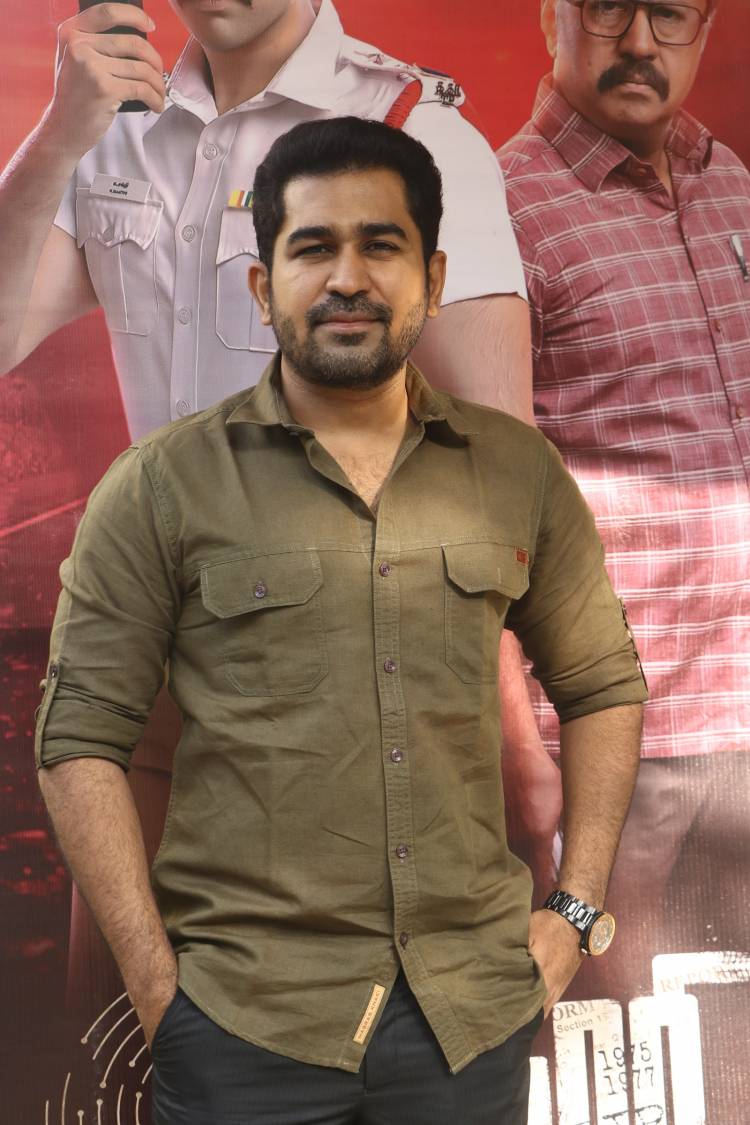 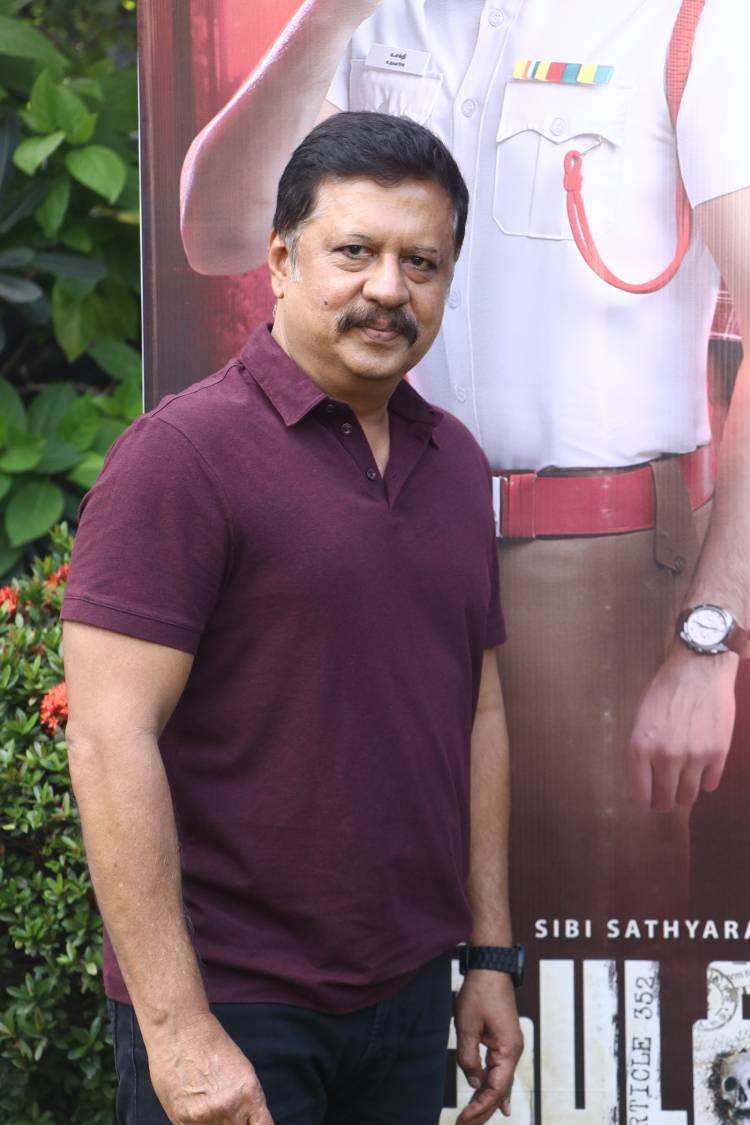 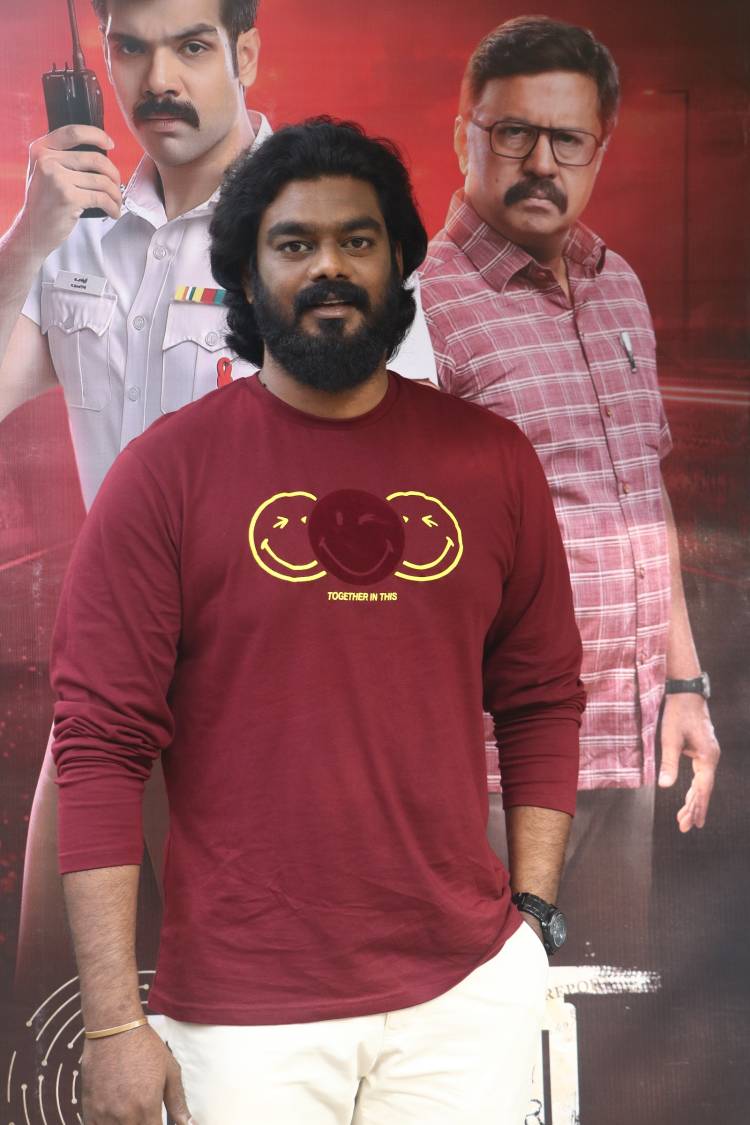 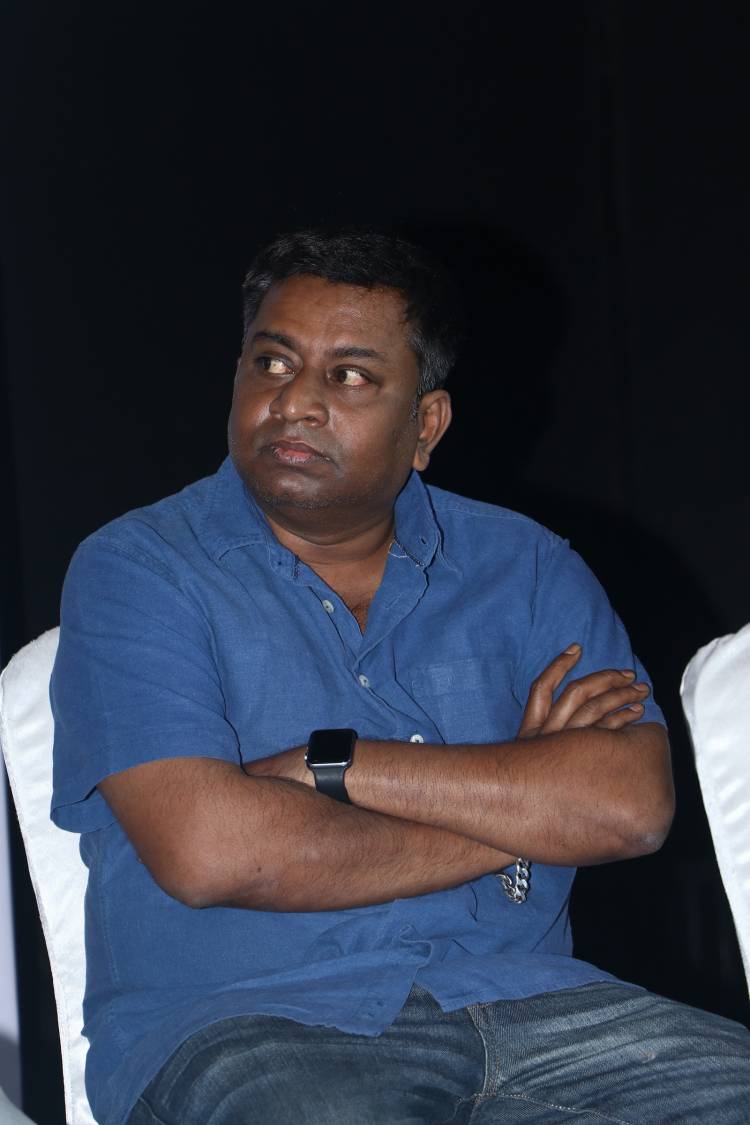 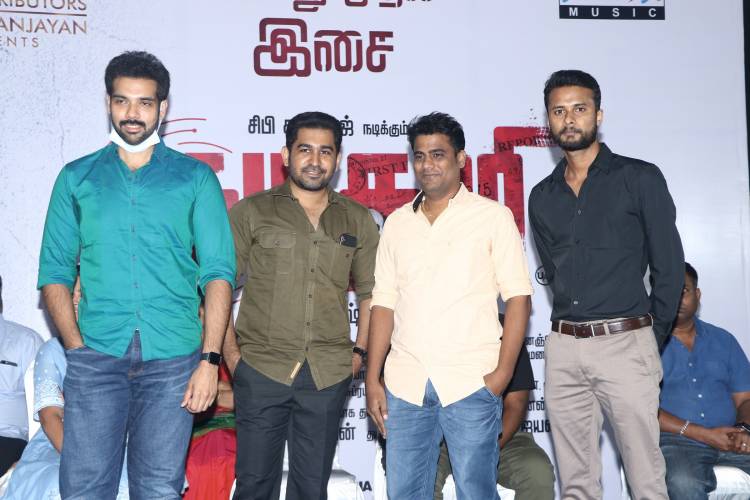 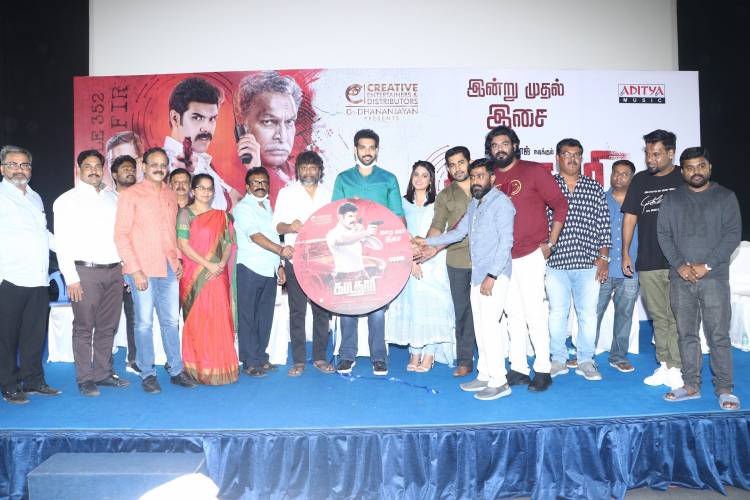 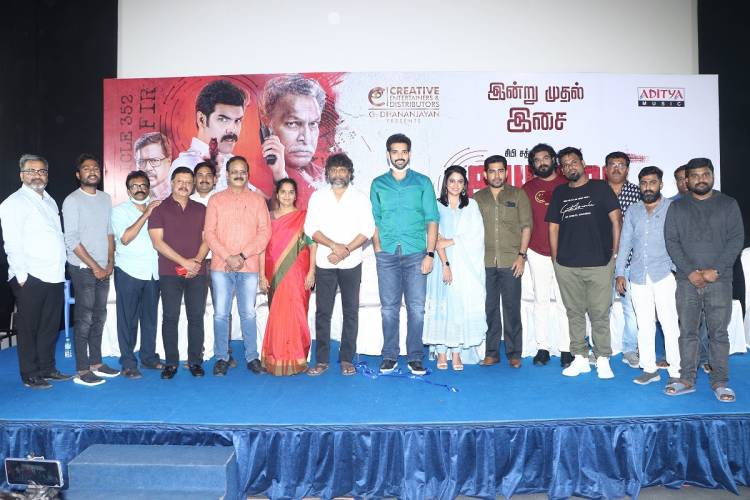 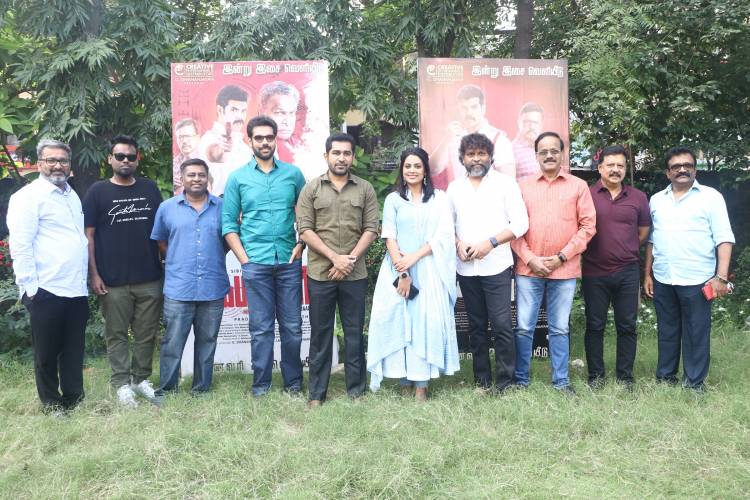 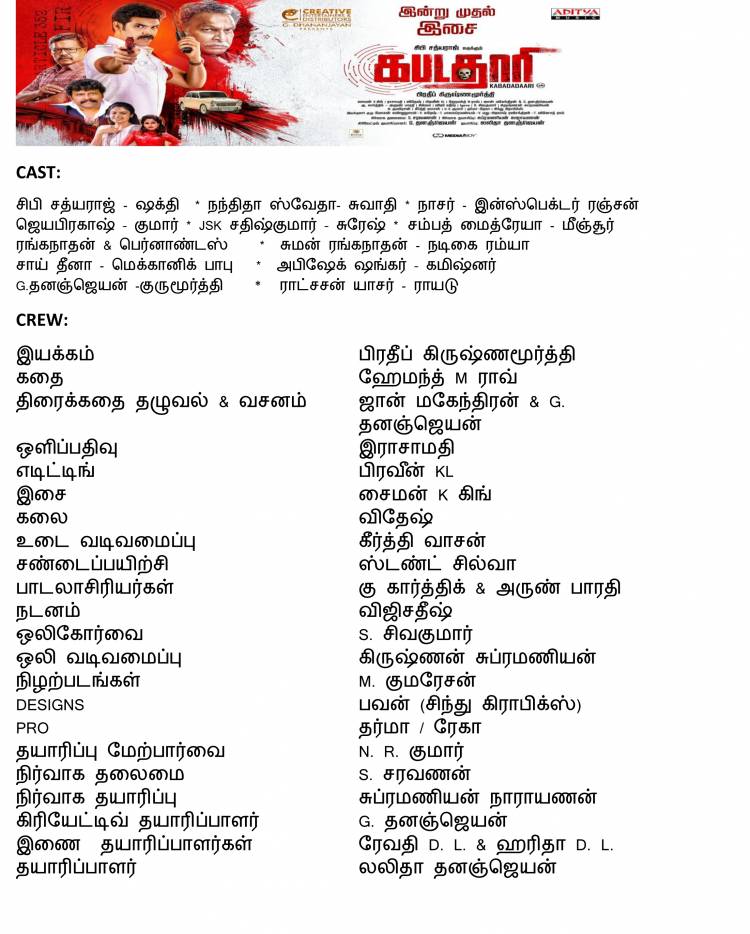 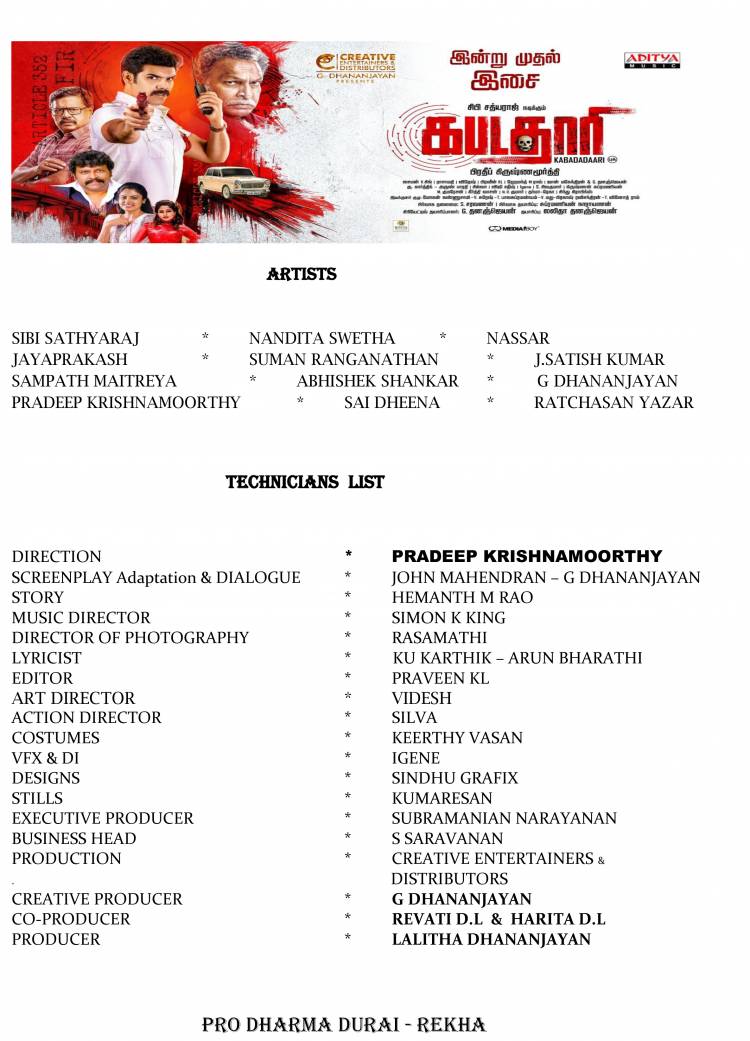 The audio launch of Sibiraj starrer Kabadadaari had the entire cast and crew present for the occasion. The film is directed by Pradeep Krishnamoorthy and is produced by Dr.G. Dhananjayan & Lalitha Dhananjayan of Creative Entertainers and Distributors . Here are the excerpts from the event.

Director Pradeep Krishnamoorthy said, “First and foremost, I would like to thank my producers for this great opportunity. It all started with a surprise  call from Dhananjayan sir as he asked me if I could do this film. I am sure, everyone in the team has now watched the movie and I am extremely happy that they are happy. I am exhilarated that I have done justice to the script and lived up to the expectations of Dhananjayan sir.”

Editor Praveen KL said, “Soon after reading the entire script, I was so much excited and wanted to be a part of it. While interacting with director Pradeep Krishnamoorthy, I thought he would be a tough guy, but later realized that he is a sweet-hearted person and there’s a spiritual haven inside him. I have learnt a lot from him during the working period. Sibiraj has done a marvelous job and every actor in the film including Jayaprakash sir, Nasser sir, Nandita and others have contributed a lot towards the best output of film. The film will keep audiences guessing and engaged from first till end last minute. I am happy that after a long time, a film is getting released smoothly on a special occasion.”

Actor-Producer J Satish Kumar said, “I thank the entire team and producer Dhananjayan sir for giving me an opportunity to be a part of this film. Recently, I saw the final output and was really enthralled to see that there isn’t a single dull moment. The film is already a huge success in Kannada film industry and I am sure, the Tamil adaptation will be more engrossing than the original. I would say that Music Director Simon K King is another lead hero in the movie for his musical score has contributed a lot towards intensifying the depth of the film. Sibiraj looks more tailor-made for the role and he has done a commendable job. It has been a satisfactory job for each and every artiste, who has worked in the film.”

Actor Jayaprakash said, “Dhananjayan sir’s energy level is always at the best. From Day one till now, the energy levels are the same. Director Pradeep Krishnamoorthy is such a cool person and I have never seen him tensed on the shooting spot. He is so clear with what he wants and gets it done by acquiring it from the artistes and technicians. Dhananjayan sir is all rounder and he has handled all the production works all by himself.

As far as concerned with my part, It’s been a very long time, ever since I got a substantial role to play in a Tamil movie. Working with Pradeep Krishnamoorthy was completely a different experience. When he called me for the first time to meet for the Look Test, he casually said that he would come and meet me at home. Such is the genuine and down to earth nature of Pradeep. I have done the same role in Tamil and Telugu versions and it has been a phenomenal experience indeed. I will be travelling with the hero character played by Sibiraj throughout the movie.”

Music Director Simon said, “It’s always a delight to work with your favourite for the second time. In this aspect, I am lucky to be collaborating with director Pradeep and Sibiraj after ‘Sathya’. Moreover, it was like a reunion of Sathya team. I have already worked with Nandita as well in a movie. Pradeep is a fun-loving person and a perfectionist at the same time. Although the film is simultaneously shot in Tamil and Telugu, both will look like two different movies. It was a unique experience working in Kabadadaari as the most of the composing sessions happened through cyberspace and Skype during lockdown. Music has a pivotal role in the film and it is almost like a character. I am so happy that I got an opportunity to work in a movie that has scope for music.”

Actress Nandita said, “Usually, actors have the routine call sheet of working in a particular role and movie and then shift to another project simultaneously. There are chances, where the essence of a character gets diminished during the process. But Pradeep Krishnamoorthy had exerted so much emotional aspect into every role. In particular, I couldn’t get out of this role at an ease even after the shooting was over. Sibiraj was really a great support while shooting and he kept everyone on the sets. Although I have watched the original version Kaavaludari, it was completely a different experience to work and watch the final output of Kabadadaari. I have already worked as Jayaprakash sir’s daughter in a movie and this helped us bond very well in this movie. I keep calling him ‘Appa’ and our chemistry will be more than with mine and Sibiraj. There are lots of things that youngsters in the industry have to learn from Dhananjayan sir. I thank him for giving me an opportunity to be a part of this film.”

Lyricist Ku Karthik said, “After working with Simon, it’s good to work with him again. I thank Dhananjayan sir for giving me more freedom to express my ideas. It will be a great breakthrough for Sibiraj sir, who is already successful with back to back hits.”

Lyricist Arun Bharathi said, “I have written a song titled Kabadadaari. I have earlier worked with Simon K King in Kolaigaran. Dhananjayan sir wanted me to write a similar song. I thank the entire team for giving me an opportunity to be a part of this film.”

Producer T Siva, Amma Creations said, “I thank Master team for making a big opening for theatres again. The film is faring well even beyond the holiday season. Today, we are happily here at the event of Kabadadaari. I thank producers Lalith Kumar, Vijay and Vijay Sethupathi for the great work. Dhananjayan sir and Lalitha madam are both strong will power beings. I am sure; Kabadadaari will be a 100% successful film. I want Pradeep Krishnamoorthy to be a successful director. Sibiraj hails from a family of film background, but still has been keeping his own way of achieving it bigger. Nandita is one perfect actress, who has come across a very commendable phase with discipline and there hasn’t been a single complaint against her till now. This is her secret of success formula. I wish Simon  for the best success.”

Actor Sibiraj said, “It’s been a tough phase for everyone in our state during the pandemic phase. I thank the entire Government, medical staffs and everyone, who played a pivotal role in keeping it under control. I thank actors Vijay and STR for making the crowds comeback to the theatres. As everyone knows, the film is a remake of Kannada movie Kaavaludari. But we have already made lots of changes to the script. Everything involving the remake was something purely based on intuition and good instincts. Dhananjayan’s contribution towards the film is remarkable. I would say that his gesture of featuring me in lead role has escalated my self confidence. After success of ‘Sathya’, I am glad to be working with Pradeep Krishnamoorthy. He never showed any signs of ego while handling a remake and has intelligently adapted it for the Tamil-Telugu remake. He had one a small pivotal role in the movie and will be surely getting more acting offers. Working with Nandita has been great. Although both of us having little combination, she has contributed a lot towards the film. Working with Nasser sir is almost like sharing the screen space with my father. Simon’s rerecording music will be one of the most talked about aspect after the film’s release. Usually, editor Praveen KL will be editing the scenes that are sluggish, but he has never deleted a single shot. This has instilled more confidence about our work for the film. I thank Vijay Antony sir for not just attending the event, but introducing me to Pradeep.”

Actor Vijay Antony said, “Dhananjayan sir has the energy that equals 10 fast moving ants. He will go out of the way and inspire us vividly. In spite of hailing from a family of huge film background, Sibiraj has always been down-to-earth and humble. Simon K King is sure to make a big time in the music industry. I would say that JSK sir is a parallel hero in the movie. I have shared a lot of time working with him in the movie Agni Siragugal.  I wish the entire team of Kabadadaari for a huge success. It’s such a great effort by ‘Master’ team to release the film during this critical juncture and I request the press-media to support all the movies wholeheartedly for the months to come.”

A huge shoutout to the crew that held everything together...

A huge shoutout to the crew that held everything together .....