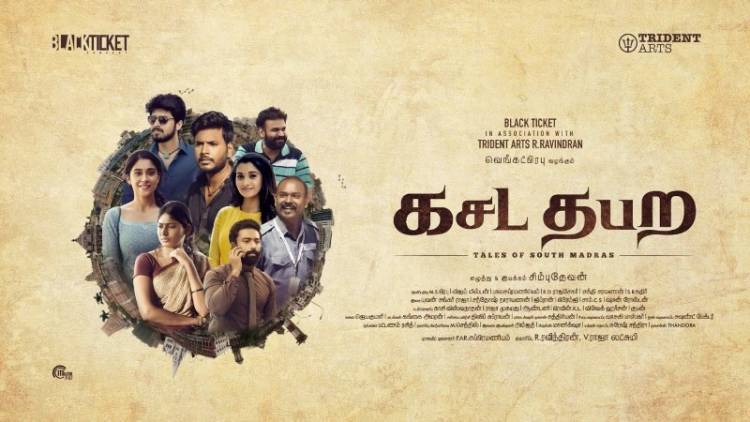 Unconventional experiments packaged with right ingredients have always been the source of instant attraction in showbiz. Chimbu Devan’s multi-starrer Kasada Tabara has become a much celebrated topic of micro-blogging pages, online portals and media hubs now. With the first look motion poster getting colossal reception, the entire team is having its lofty toast of happiness about it.

Director Chimbu Devan says, “It was entirely a different and phenomenal experience to work with bunch of talented actors and technicians. Perhaps, it might sound to be a stereotypical statement, but taking a look at star-cast and technicians, it is definitely going to be proved right. Name anyone in this league - Harish Kalyan, Sundeep Kishen, Shanthanu Bhagyaraj, Venkat Prabhu, Premgi Amaran, Vijayalakshmi or Priya Bhavani Shankar, everyone is known for their unique styled performance.

In addition, they have been someone, who haven’t been on a hurried race, but always take scrutinizing efforts for settling down with right projects. Getting on with the technical team, it’s almost like a maximized collage portrait of almost all the reigning personalities of our industry.

From the well celebrated iconic Yuvan Shankar Raja, Santhosh Narayanan to the current sensations like Ghibran and Sam CS, it’s unimaginably a huge boon to Kasada Tabara. I am thankful to producers V. Rajalakshmi and Trident Arts R Ravindran for trusting this concept and helping to materialize it. Now to see the wowing response for the first look and motion poster endows  us a compelling confidence in us over our next processes of audio and trailer followed by worldwide theatrical release in July 2019."

The specific genre called ‘Anthology’ has always received bouquets and resentments at times. So how does Chimbu Devan see this in context with Kasada Tabara? He instantly reverts with a surprisal citation saying, “I would like to clarify that our film doesn’t belong to this genre. Anthology is a collection of short stories that has no connection between one segment and the other. In contrast, Kasada Tabara is a film with single story encapsulating six portions.”

The First Single PsychoRaja from PDdancing 's Bagheera out now

Dushara Vijayan is almost in a state of confusion as people...

Dushara Vijayan is almost in a state of confusion ......