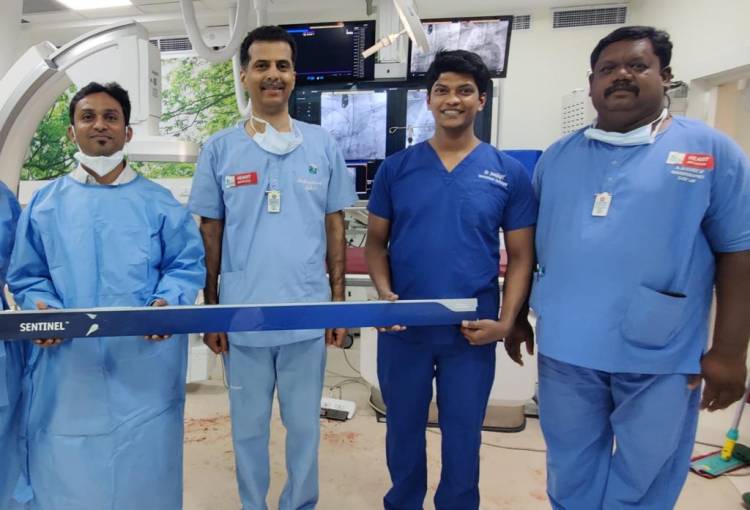 ~ It is also the first time in India that the SENTINEL™is placed in a bovine arch, where one large trunk arises from the heart and gives off both carotid arteries ~

Chennai, June 16, 2022: Apollo Hospitals Chennai, the flagship hospital of the Apollo Hospitals Group today announced the successful completion of a procedure using the SENTINEL™ Cerebral Protection System, a new technology shown to help protect patients from the risk of stroke during a minimally invasive heart valve procedure. The technology was used for a transcatheter aortic valve implantation (TAVI) on a high risk 89-year-old male patient. Apollo Hospitals Chennai is the first healthcare institution in South India to use this protected TAVI /TAVR technology.

The procedure was carried out by Dr G Sengottuvelu, Senior Consultant & Interventional Cardiologist and his team. Dr Sengottuvelu said, “The patient was an 89-year old male who had a surgical Aortic Valve replacement in 2006. He presented with severe breathlessness and swelling of the lower limbs. On examination, he was found to have a degenerated aortic valve. He was a very high risk patient as he also suffered from liver disease, severe lung disease with COPD and kidney failure. Surgery was therefore ruled out. TAVI was recommended but the presence of degenerated valves increased the risk of stroke during the procedure. We therefore used the SENTINEL™device, which has two filters to reduce the risk of embolization of particles from the degenerated valve.”

As a non-surgical alternative to replace the aortic valve in patients with aortic stenosis, transcatheter aortic valve implantation (TAVI) and transcatheter aortic valve replacement (TAVR) can help save lives and significantly improve quality of life. However, like all medical procedures, it may involve risk. During TAVI/TAVR procedures, embolic debris such as calcium or tissue can break loose, travel through the bloodstream towards the brain, potentially cause neurological damage and result in a stroke. Recent studies have estimated approximately 3% of patients experience a clinically-apparent stroke within 30 days of a TAVR procedure

The SENTINEL™ Cerebral Protection System filters, captures and removes such debris, and is the only US FDA-cleared device to protect the brain against the risk of stroke during TAVI/ TAVR. It has been shown to capture debris flowing toward the brain in 99% of TAVI / TAVR cases, and to reduce the incidence of strokes by 63% within the first 72 hours of the procedure.

Dr G Sengottuvelu, Senior Consultant & Interventional Cardiologist said, “The risk of stroke is a reality of the TAVI procedure and the SENTINEL™ System has been shown to help reduce that risk. It is a matter of pride to have performed the first procedure in South India using this device. The patient in this case also had a bovine arch where one large trunk arises from the heart and gives off both the carotid arteries was another challenge. This is the first time in India that the SENTINEL™cerebral protection system has been used in a bovine arch. This is another milestone in our journey of offering patients the latest medical technologies.”

It was in 1983, that Dr Prathap C Reddy made a pioneering endeavour by launching India’s first corporate hospital - Apollo Hospitals in Chennai. Now, as Asia’s foremost trusted integrated healthcare group, its presence includes over 12,000 beds across 72 Hospitals and 4100 pharmacies, over 120 Primary Care clinics and 650 Diagnostic centres, 700 plus Teleclinics, over 15 medical education centres and a Research Foundation with a focus on global Clinical Trials. The most recent investment was the commissioning of South East Asia’s very first Proton Therapy Centre in Chennai.

Every four days, the Apollo Hospitals Group touches a million lives, in its mission to bring healthcare of international standards within the reach of every individual. In a rare honour, the Government of India had issued a commemorative stamp in recognition of Apollo's contribution, the first for a healthcare organization. Apollo Hospitals Chairman, Dr Prathap C Reddy, was conferred with the prestigious Padma Vibhushan in 2010. For 38 years, the Apollo Hospitals Group has continuously excelled and maintained leadership in medical innovation, world-class clinical services and cutting-edge technology. Its hospitals are consistently ranked amongst the best hospitals in the country for advanced medical services.