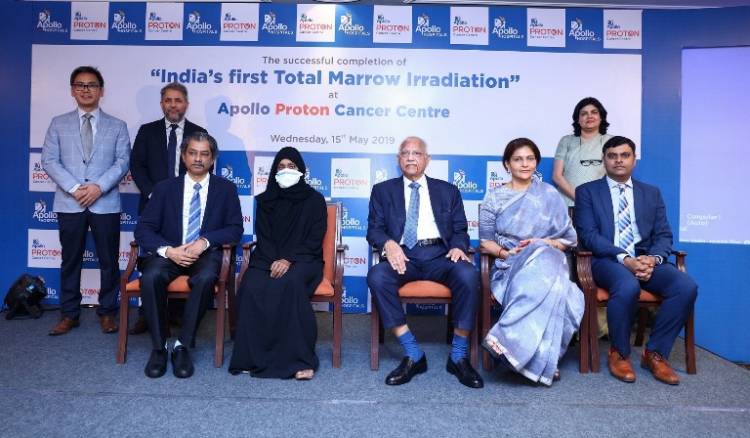 Chennai: In a first-ever milestone in cancer treatment in India, the Apollo Proton Cancer Center (APCC) in Chennai has successfully performed Total Marrow Irradiation (TMI) as a conditioning protocol prior to Bone Marrow Transplant.

Dr. Preetha Reddy, Vice Chairperson, Apollo Hospitals Group said, “The Apollo Proton Cancer Centre has opened new frontiers in cancer care and it is a proud moment today, just a few months after the launch, to see the APCC achieve this significant landmark with two successful cases of Total Marrow Irradiation for the first time in the country. This achievement validates our investment in the APCC in bringing this best and latest medical technology to India. We are sure that the future will see the APCC achieve many more milestones and take the battle against cancer forward not just for patients in India but also from South East Asia.”

A 35-year-old nurse from Oman underwent the procedure at South East Asia’s first Proton Therapy Center. She was diagnosed with Chronic Myeloid Leukemia (CML) with mixed phenotypic acute leukemia. After the diagnosis, she underwent chemotherapy 2 cycles at Oman and achieves remission and then referred to Apollo for Bone Marrow Transplant. The doctors at Apollo decided to proceed with Total Marrow Irradiation based conditioning for the transplant.

The Total marrow irradiation was successfully conducted from 18th to 20th April and it was followed by two days of chemotherapy. The patient subsequently underwent the peripheral blood stem cell transplantation on 23rd April 2019.

“The 35-year-old patient was admitted to our hospital last month and after detailed diagnosis, we decided to proceed with Total Marrow Irradiation followed by chemo and peripheral blood stem cell transplantation. The patient’s brother turned out to be a full-matched donor. The patient has responded very well to the treatment and is getting ready for discharge,” said Dr. Jose M Easow.

“The advantages of Total Marrow Irradiation over Total Body Irradiation is that only the bone marrow is irradiated and the normal organs are spared like eyes, thyroid, heart, lungs, kidneys, ovaries, both large and small intestines. So a higher dose can be delivered to the Bone Marrow sparing the normal organs, whereby long term side effects can be minimized,” added Dr. Srinivas Chilukuri.

People with certain types of cancers or other diseases including leukaemia, lymphoma and multiple myeloma can undergo a BMT as part of their treatment. Before the transplant, chemotherapy and/or radiation may be given to eradicate any cancer in the marrow. Traditionally, Total Body Irradiation (TBI) is part of the conditioning regimen before the bone marrow transplantation. This procedure involves providing radiation to essentially the entire body.

“TMI is an extremely time and labour-intensive procedure with gratifying possibilities and will provide hope to patients towards a better life free of major morbidities,” added Dr. Jose M Easow

Chennai based Rishabh Singh, second runner up of "ICICI Appathon 2019"

Shriram Group, one of India’s leading financial conglomerates has committed a contribution...

Someone has rightly said, “Love has no boundaries, no rules and knows no reason”,...