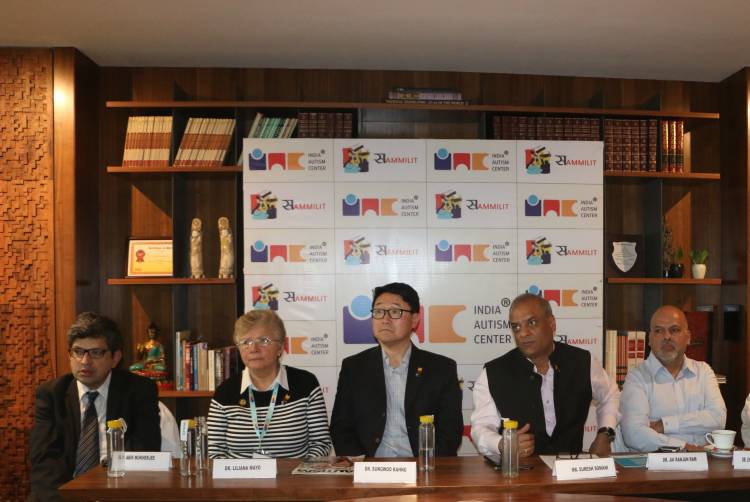 India Autism Center (IAC), an initiative by Ratnabali Group which is setting up a first of its kind development center in the world for individuals with autism, over a 52-acre land near Kolkata hosted ‘Sammilit’, the International Conference on Autism 2020 (www.autismconference.in) on and from January 10 to 12, 2020 at Amity University, Kolkata, which addressed the problem at grassroots levels by initiating an inclusive space where every participant, listener, visitor, and volunteer is an equal who will enhance the society with their unique personality and characteristics. The Conference witnessed globally recognised advocators from the autism community discussing on latest development and research on Autism focusing on many leading and upcoming research and clinical practices in the field of Autism. The discussions provided comprehensive, evidence-based information to assist educators, other professionals, and families in developing effective educational programming for all individuals under the spectrum.

❖Almost 1 out 68 children are diagnosed with ASD in India.  It is also considered to be one of the most rapidly growing developmental disability all over the world, including India

❖In India, one of the most common mistakes made by people is to call Autistic individuals as mentally retarded whereas in reality they are completely different categories of disability

❖Despite an increase in the number of ASD cases being detected in India, many individuals with Autism still remain undiagnosed and fail to receive the appropriate services they need
- Description: Text Box 2Autism, or Autism Spectrum Disorder (ASD), is a neurological and developmental disorder that affects about ten million Indians. It refers to a range of conditions characterized by some degree of impaired social behaviour, communication and language. The term “Spectrum” reflects that symptoms can occur in any combination and with varying degrees of severity, implying that it manifests itself differently in every individual.

Some of the global experts on Autism who were seen deliberating were Ms. Liliana Mayo, Founder and General Director of Centro Ann Sullivan del Perú, an organization that serves people with developmental disabilities and their families, Mr. Ronald Leaf, a licensed psychologist who began his career working with Ivar Lovaas in 1973, Dr. Abir Mukherjee, eminent psychiatrist and associated Amri Hospital and Dr. Jai Ranjan Ram,  MD in Psychiatry from NIMHANS, Bangalore and also MRCPsych from UK and CCST in Child and Adolescent Psychiatry and Mr. Suresh Somani, Managing Trustee & Chairman, India Autism Center .

systems often focus on strengthening in-demand-skills to increase employability. Interdisciplinary growth is essential but unfortunately undermined by academic blinkers forced on children’s eyes. At Sammilit, our attention will be drawn towards the importance of holistic development so that each child is emotionally empowered, passionately driven, physically confident and spiritually aligned.”

India Autism Center believes that by ensuring meaningful employment opportunities for an individual on the autism spectrum, he or she can lead a life of general well-being and self-sustainability. IAC will provide the right kind of support to the individuals, so that most of them are able to strive for excellence in the workplace, no matter what the nature of employment may be. IAC’s program is designed to identify the strengths of these individuals and to empower them with the necessary skills required to be successful and productive members in both their homes and community.

The main event constituted a conference where highly knowledgeable and skilled individuals from across the world had assembled to share their wisdom and study regarding developing a conducive, integrated and inclusive lifestyle with people on the spectrum. ‘Sammilit’ witnessed an interactive panel discussion to break barriers that separate us from people on the spectrum by stating truths about mental health conditions and debunking deep-rooted myths. To merge both communities, Sammilit also hosted an all-inclusive exhibition showcasing expressions of art by neurotypical people who work in the field of Autism along with people on the spectrum. This uncovered a whole new world of artistic abilities and intense creative emotions when the young and old had projected their minds through colors and strokes on paper, narratives in verse and poem, instruments strung with melodies, and memories captured in photographic frames. For those interested in personal training and deep learning sessions on Autism, IAC had also conducted certification workshops curated for parents, students, special educators, therapists, and doctors.

The research committee of India Autism Center consists of professionals like Bhismadev Chakravarti, Prof. Sumantra Chatterji, and Dr. Megha Sharda. All the committees are moving forward and working symbiotically to bring about an all-round development to the project. IAC also has onboard with it the architect team as well as a landscapist’s team who help in portraying a more meaningful and sustainable approach to the whole design. A core team has been formulated and investigate the nitty-gritty of the entire project and join the dots for the same.

Producer R. B. Choudary sir regarding the complaint raised...

Producer R. B. Choudary sir regarding the complaint .....