Disney+ Hotstar VIP presents 1962: The War In The Hills, an untold story of a battle that changed the course of the war 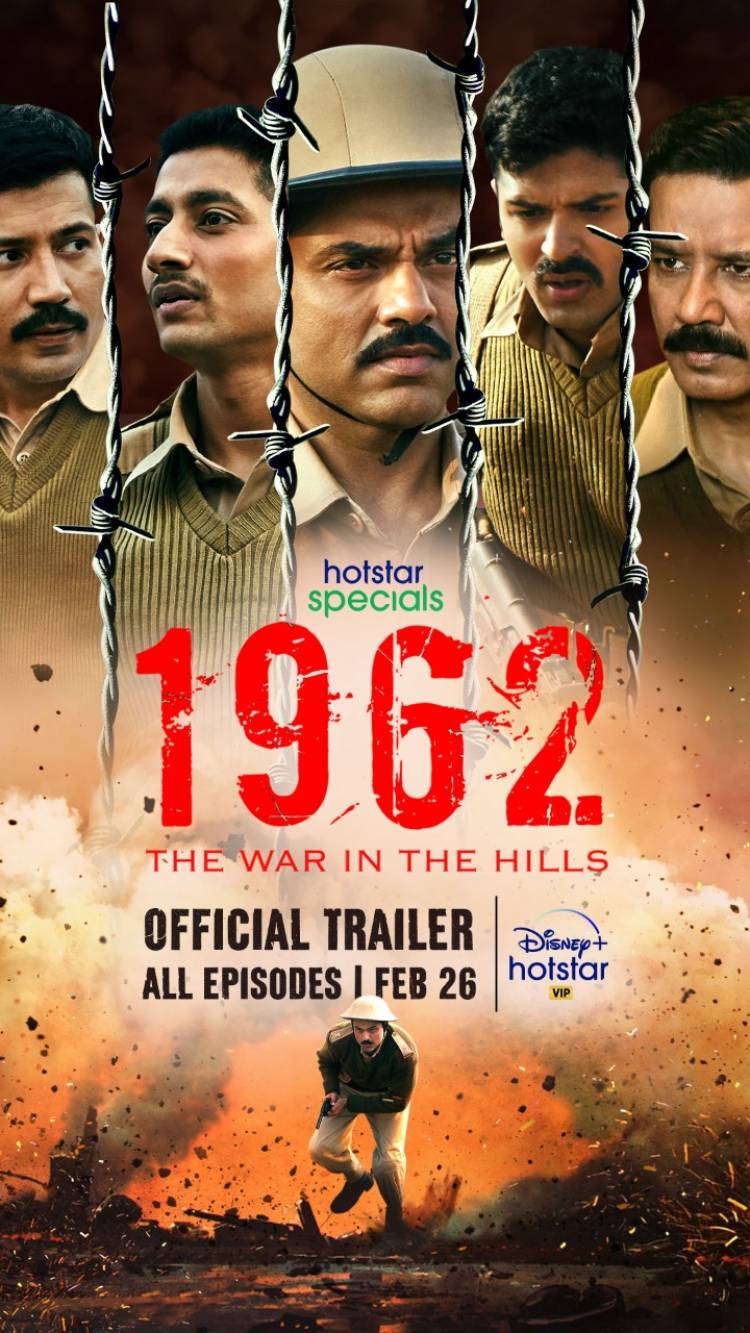 Disney+ Hotstar VIP presents 1962: The War In The Hills, an untold story of a battle that changed the course of the war

Disney+ Hotstar VIP presents 1962: The War In The Hills, an untold story of a battle that changed the course of the war; Starring Abhay Deol and directed by Mahesh Manjrekar

~ Inspired by true events, this is the untold story of bravery and valor where 125 soldiers fought back 3000 Chinese

Mumbai, 15th February 2021: Almost 60 years ago, our soldiers stood strong to protect what truly belonged to the nation - Ladakh; a battle we continue to fight even today. This is the story of 125 Indian soldiers who fought against 3000 Chinese in a battle that changed the course of the war. Inspired by true events, Hotstar Specials brings 1962: The War In The Hills - a tale about these soldiers who despite being outnumbered and armed with basic equipment stopped the infiltrating army in its tracks, which became one of the greatest last stands in military history. While this story is inspired from similar stories from India’s past, telling it in today’s time when border tensions have fueled again due to Chinese aggression, is a timely reminder of the immense bravery of our armed forces.

Produced in partnership with Arré Studio, this 10-episode war-drama has been written by Charudutt Acharya and directed by one of Bollywood’s finest filmmakers Mahesh Manjrekar who has beautifully captured not only the war, but also the personal lives of the soldiers and what they left behind in service of the nation.

World-renowned action choreographer Don Lee, best known for directing a host of spectacular franchises such as Pirates of the Caribbean, Star Trek Beyond among others, has choreographed all action sequences in the series giving each soldier a unique way of combat. The series has been shot in the high terrains of Ladakh and remote villages across India that gives the show a real, believable look. Music forms a big part of the narrative as it heightens several emotions in the story – that of longing, pride, and service to the nation. Hitesh Modak has composed 7 songs  sung by some of the best voices in India - Sukhwinder Singh, Vijay Prakash, Salman Ali, Shailey Bidwaikar and Shahjan Mujeeb among others. Hotstar Specials presents 1962: The War in the Hills will release exclusively on Disney+ Hotstar VIP and Disney+ Hotstar Premium on 26th February 2021.

Director Mahesh Manjrekar said, “1962: The War In The Hills is the result of a life-long dream of bringing alive a part of history that has been long forgotten. The journey of these 125 soldiers, while inspired by true events, is a story that needed to be told. And it has taken us years of writing to do justice to every character. This project has been monumental in every sense – from shooting in real locations, to recreating the 1962 era through setups, costumes and more. But this story is not limited only to the battleground, it takes us beyond into the lives of these soldiers as they grapple with love, longing and loss.”

Actor Abhay Deol added, “There is something to be said about stories of such historic importance. To me, it feels like a personal responsibility to deliver the strength of Major Suraj Singh, to showcase his brave exterior as he leads his troop in a battle to the last stand, while also dealing with life as a father and husband. It's an extraordinary story about courage that is relatable to everyone, no matter which community or culture they belong to."

Actor Mahie Gill said, “Even though 1962: The War In The Hills is a story of the past, it almost seems like a reflection of today’s time. The story is layered and showcases many different aspects of a war – not just political and geographical but also personal. There is equal focus on the families of these soldiers and that what makes it much more than just a war-drama”

Inspired by true events, 1962: The War In The Hills is a fictional take about one of the fiercest battles ever fought. 125 Indian soldiers of the battalion ‘C Company’ fought 3000 Chinese to the last man and last bullet; led by their leader Major Suraj Singh. Hailing from the village of Rewari, this is also a story about their personal battles, their life beyond their uniforms and their times of love, heartbreak, longing and celebration. They band together in the harshest battlefield and hold up a strategic pass that stopped the infiltrating army from taking over a prime airstrip fighting till their last breath to protect what truly belonged to the nation – Ladakh.

1962: The War in the Hills will release exclusively on Disney+ Hotstar VIP

~Hotstar Specials presents 1962: The War in the Hills, a 10-episode war-drama set to launch on 26th February 2021 exclusively for subscribers of Disney+ Hotstar VIP and Disney+ Hotstar Premium ~

ICICI Bank today announced that it has integrated its AI powered multi-channel chatbot,...

VOLNAA TO EXPAND THEMSELVES IN FOUR MORE CITIES.

Tech Trends that will Rule the Gaming Industry in 2021

Gaming has been a predominant trend in the West .....