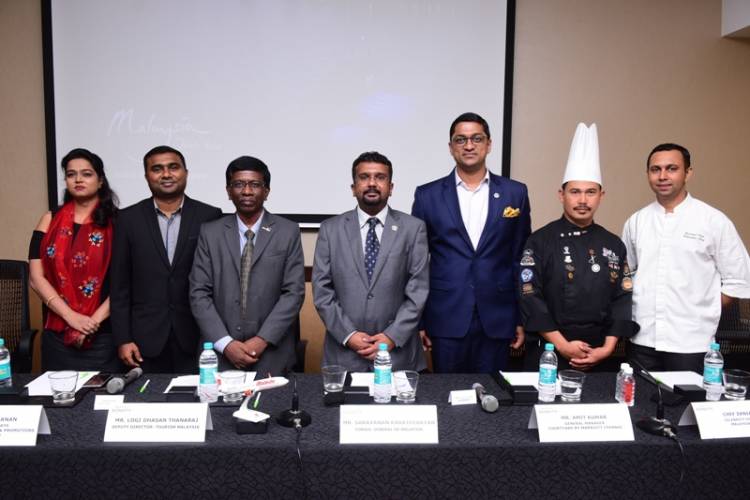 Courtyard by Marriott Chennai will be hosting the “Flavors of Malaysia” an exclusive food festival bringing the flavours of Malaysia to Chennai in association with Malindo Airways & Tourism Malaysia from 24th June to 4th July 2019.

Chef Zanial from Malaysia who brings with him over 25 years of experience in the field of culinary arts will be heading the food festival along with Chef Sushant, the Executive Chef at Courtyard by Marriott Chennai.  The food festival will showcase rustic and the authentic cuisine of Malaysia to the people of Chennai.

Chef Zanial and his team of Malaysian chefs will be flown into Courtyard by Marriott Chennai to create the most authentic street delicacies for two weeks to awaken your taste buds this summer with a blend of spices, depth of character and complex recipes that will leave an imprint on your memory.

Some of the authentic dishes to be available during the food festival are REDANG AYAM - a dry type of curry. Traditional Malaysian Chicken Rendang is a version of dry chicken curry dish and is one of the specialties in Malaysian cooking, AYAM MASAK MERAH – a Malay Style Red Chicken Curry or Chicken in Red Chili Sauce, IKAN MASAK KARI – a Thick Fish Curry, PAJERI NENAS - a Pajeri Nenas (pineapple curry), which will be sweet, creamy and slightly sourish taste, SAMBAL TERONG - a roasted eggplant dish, covered in spicy chili sauce, SATAY – a dish made from small pieces of meat or fish grilled on a skewer and served with a spicy peanut sauce and some DALCA SAYUR – a traditional Vegetable Dalcha.

For the ones with the sweet tooth that is array of desserts as well. From the ONDE-ONDE - a Green-colored balls of glutinous rice cake filled with liquid palm sugar and coated in grated coconut to the KUIH SRI MUKA - Malaysian steamed layer cake which consist of a glutinous rice layer steamed with coconut milk and a sweet pandan custard layer to the KUEH TALAM – a dessert  made of coconut milk and is slightly salty to taste but is also topped with a pandan mixture and TEH TARIK – a hot milk tea beverage which can be commonly found in restaurants and outdoor stalls, there is something for everyone.

Talking about the food festival Mr.Logi Dhasan Thanaraj, Deputy Director (South India & SriLanka), Tourism Malaysia said “Malaysia is a melting pot of culture and multi-racial diversity with various signature dishes. This multi-racial diversity is where the culinary expertise comes into play as it has allowed people to blend together more than one cuisine to create the Malaysian Street Foods. I am happy that Courtyard by Marriott Chennai has partnered with us for such a fabulous food fest and I am sure that Chennaites will like the flavors of Malaysia.”

Fit in with the Misfits at Phoenix MarketCity!

Phoenix MarketCity, the city?s destination for music entertainment, will be hosting...

Kohli has become the Trump of world sport: Australian media

Kohli has become the Trump of world sport Australian media, The on-field antics...