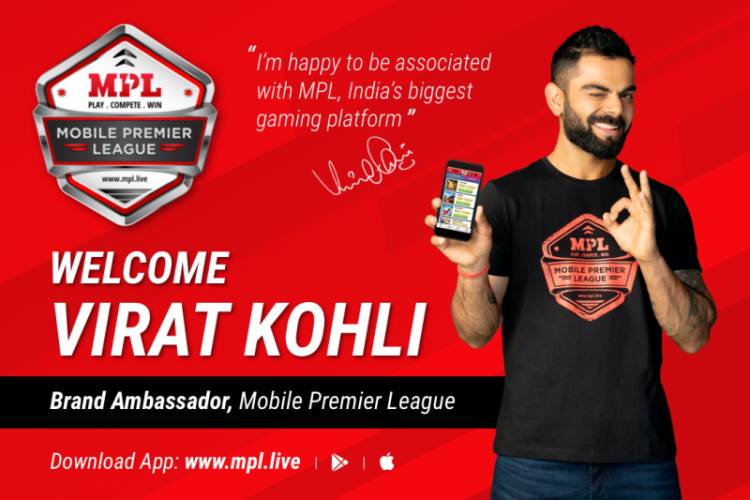 MPL is the leader in the competitive mobile gaming space where users get to participate in a range of games and compete against over tens of thousands of players in tournaments. Users can access several of India’s most loved mobile games on the platform, which hosts both tournament and 1v1 style player formats.

“eSports brings people together and breaks barriers of age and region, often empowering and encouraging those who play it. I am extremely happy to associate with an exciting young brand like MPL, that is making mobile eSports so accessible to Indians across the country” said Virat Kohli, Captain, India Cricket Team.

Commenting on their newly formed partnership Sai Srinivas Kiran, CEO & Co-Founder, Mobile Premier League said “Virat is an inspiration to many Indians- young and old. His focus and dedication to developing his skills as a sportsperson and the never-say-die attitude he brings to everything that he does, has resonated well with fans around the world and with our brand. MPL believes that everyone can be a winner like Virat, and through our association with him, we hope to make mobile eSports more accessible to people across the country.”

Esports has been gaining momentum in the Indian market with the proliferation of mobile phones and affordable data plans. According to a Forbes report, the Indian mobile gaming industry is estimated to grow to over $1.1 billion and 600 Million users by 2020. Localized content, easy and affordable access and enablement of mobile payments have contributed to the rise of the sector.,

Much like Virat’s innings, MPL too ensures there is always something exciting for users to look forward to, with new games being added every week. The games are designed in such a way that anyone can compete and win. Users can download the MPL App from mpl.live and join in on the action.

TATVA School is happy to invite you to Kids Fete to make it possible for your...

30 youth duped on the pretext of BSF jobs

30 youth duped on the pretext of BSF jobs, Thirty young people, a dozen of them...