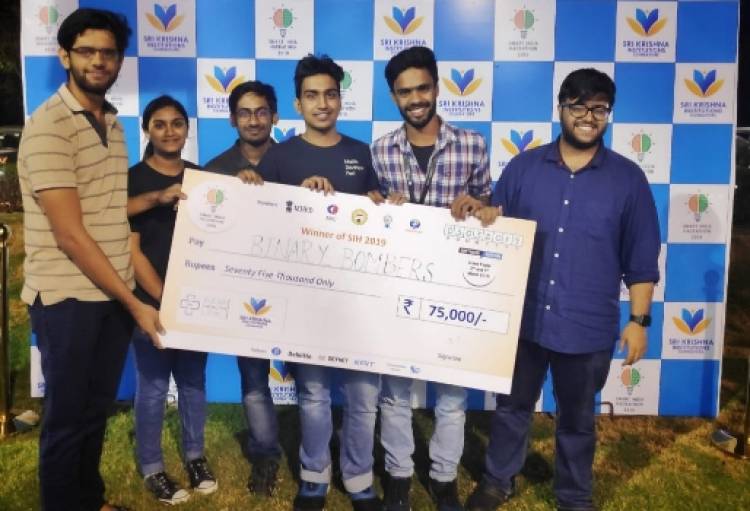 A 6 member student Team (Binary_Bombers) from SRM IST participated in Smart India Hackathon – 2019 and stood first in the Complex Problem category put forward by India Health Link in order to come up with an innovative way to bring up a healthier India by harnessing the power of social networks. The team developed a social network that is based on health parameters which is seamlessly integrated with wearables and other devices for data collection. Also, it suggests ways to improve health for each person by using Neural Networks. The likes of Xiaomi Mi Band 2, Apple Watch, Fitbit Charge etc. were seamlessly integrated for data collection.

Also, the team came up with a very innovative idea to use an Android Phone’s camera to measure Heart Rate, Breath Rate, Oxygen Saturation, Systolic Pressure and Diastolic Pressure. These metrics were collected and sent to server to train the ML model further for improved accuracy in suggestions. A completely user friendly dashboard was developed by the team, which worked without any hassles on all platforms. Emphasize on Mobile First strategy was praised by the judges as India has evidently higher proportion of smartphone users. Dashboard was integrated with a chat boat which could help users to clear basic doubts regarding the usage of the platform. Also, talk to a mentor was an attention seeking feature which enabled users to meet a mentor from the health industry via live video chat for further information.

After the 36-hour long hackathon, Binary_Bombers demonstrated their product to various industry leaders and judges. The team was praised for their India First approach and feasibility of the suggested business model. The entire team was offered internships and extended opportunities by multiple companies after having hands-on experience with the product.

Three-day National Conference on The Mahabharata

The moment is titled carried on the shoulders of a Nation, a reference to the Indian...

Modi's Coimbatore visit to be brought under tight security...

Over 5,000 police personnel are on security duty across the city in connection with...