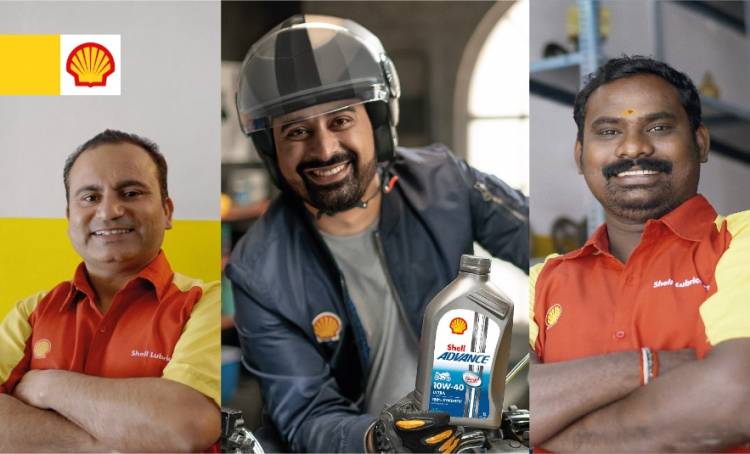 NATIONAL, 1 April 2021: Shell Lubricants, the global leader in finished lubricants, unveiled its ‘Ab Duniya Dekhegi’ campaign today, positioning itself as a trusted partner and success catalyst for mechanics. The campaign celebrates the unyielding spirit, dedication and hard work ethic of mechanics, which has helped them hone their skills and make a name for themselves. Endorsed by renowned celebrity and biking enthusiast, Rannvijay Singha, the campaign has launched two new inspiring brand films that bring alive Shell’s commitment to mechanics in their ambitious journey towards success.

The inspiration for the first film was drawn from S. Mohanraj from Chennai who shared his journey with the brand. Mohanraj persevered in a single auto workshop for 12 years, upskilled himself through several trainings and certifications over the years. A resilient worker with an ever-positive outlook, he proudly calls himself “Bikes Ka Doctor”. With consistent hard work and support from Shell, he refurbished his workshop, which has now been running successfully for over eight years. A Shell loyalist, he aspires to expand his operations and own an even bigger workshop someday. The second film celebrates Mandeep Singh from Moga, Punjab who has found his life’s purpose in growing along with his community by training over a hundred youth with employable skills. To enable this dream further, Shell supported him by completely rebranding his workshop and recognised him as a regional coach, giving him a chance to train mechanics in Shell’s upcoming training meets.

“Being a biking enthusiast, I have known mechanics at very close quarters and always admired their experience and knowledge. I've had many an experience where I had to navigate out of a tough spot and had to play the role of a mechanic. I have utmost respect for them and strongly believe that their contributions should not go unnoticed. I am, therefore, delighted to be associated with the Shell Advance ‘Duniya Dekhegi’ campaign that allows us to show our gratitude to mechanics and recognise their success,” said Mr. Rannvijay Singha.

Through this campaign, Shell aims to empower and celebrate mechanics, who have proved to be trusted advisors for bikers, playing a key role in oil change and maintenance decisions. Honing their skills over the years, many mechanics have transitioned from apprentice to auto experts and workshop owners, and Shell has been a part of their ambitious journey, helping them reach great heights. This has been made possible through Shell’s Ustaad Programme which supports mechanics’ business needs, including product and technology efficacies, training and support tools. The programme also offers them cash coupons on sale of Shell Advance products, loyalty reward points on every oil change, access to training programmes, and branded merchandise. Mechanics can download the ShareApp - Shell Advantage Rewards App, to avail the programme’s benefits.

Mr. Raman Ojha, Country Head, Shell Lubricants, India, said “The ‘Ab Duniya Dekhegi’ campaign is not about brand Shell; rather, it is the celebration of the spirit of thousands of our ‘Ustaads’ who relentlessly work with us every day. Not only are they immensely talented, but their deep knowledge of the trade is also key to their expertise in knowing these complicated machines – bikes; often so well, that we proudly call them ‘Bikes Ke Doctor’. We all have dreams, aspirations and often times in life, simply need that little support that enables us to move Higher & Onwards! In their journey where they are driven by pure passion for bikes and their dreams to grow bigger, here is our attempt at doing our small bit in supporting our ‘Ustaads’ and ‘Bike Doctors’ to move closer to achieving their dreams of setting up bigger and more equipped workshops, mobility vehicles, providing employment support, trainings, and much more. Our call to them always will be- “Karo apne sapne sakaar””.

Titus Upputuru, Creative Head Taproot Dentsu Gurgaon, commented, “A mechanic’s daily life is full of grime, oil and sweat. He spends long hours in the sun. There is a lot of labour. When we started thinking about the direction, we wanted Shell to take, we were clear that we didn’t want to show the mirror to the mechanics. We decided to show the shine in the sweat. Because unlike earlier times, when people spent a lifetime to reach their goals, the current sentiment is to do a catapult to success. We believe ‘Duniya Dekhegi’ will help Shell Advance connect with the mechanics in deep emotional ways”.

Shell is one of the most diversified international energy company in India with over 9500 employees and presence across upstream, integrated gas, downstream, renewable energy, and deep capabilities in R&D, digitalization, and business operations. With a retail presence across six states – Karnataka, Tamil Nadu, Telangana, Maharashtra, Gujarat, and Assam Shell is expanding its network of fuel stations across the country. It has the entire Lubricants end-to-end value chain in India, from conceptualization and development, to production and distribution. Serving 50000 consumers through a robust network of 200+ distributors across B2C and B2B lines of Sales. This includes a world class lubricant oil blending plant that manages a large supply chain through a network of 4 Regional Distribution Centers and 8 warehouses. The company also fully owns and operates an LNG re-gasification terminal at Hazira. With a focus on digitization and future ready sustainable solutions, the company is nurturing a vibrant ecosystem in India to accelerate energy innovations with Shell E4 for start-ups, Shell Eco-marathon and investments in new energy companies like Husk Power, d.light, Orb Energy and Cleantech Solar. Shell also remains committed to making positive contributions to the communities in which it operates through programmes like NXplorers, Access to Energy and Road Safety across India. Follow @shell_India @makethefuture @shell_ecomar to know how it is redefining the energy space.

Royal Dutch Shell plc is incorporated in England and Wales, has its headquarters in The Hague and is listed on the London, Amsterdam, and New York stock exchanges. Shell companies have operations in more than 70 countries and territories with businesses including oil and gas exploration and production; production and marketing of liquefied natural gas and gas to liquids; manufacturing, marketing and shipping of oil products and chemicals and renewable energy projects. For further information, visit www.shell.com.

The companies in which Royal Dutch Shell plc directly and indirectly owns investments are separate legal entities. In this announcement “Shell”, “Shell group” and “Royal Dutch Shell” are sometimes used for convenience where references are made to Royal Dutch Shell plc and its subsidiaries in general. Likewise, the words “we”, “us” and “our” are also used to refer to Royal Dutch Shell plc and subsidiaries in general or to those who work for them. These terms are also used where no useful purpose is served by identifying the particular entity or entities. ‘‘Subsidiaries’’, “Shell subsidiaries” and “Shell companies” as used in this announcement refer to entities over which Royal Dutch Shell plc either directly or indirectly has control. Entities and unincorporated arrangements over which Shell has joint control are generally referred to as “joint ventures” and “joint operations”, respectively. Entities over which Shell has significant influence but neither control nor joint control are referred to as “associates”. The term “Shell interest” is used for convenience to indicate the direct and/or indirect ownership interest held by Shell in an entity or unincorporated joint arrangement, after exclusion of all third-party interest.

We may have used certain terms, such as resources, in this announcement that United States Securities and Exchange Commission (SEC) strictly prohibits us from including in our filings with the SEC. U.S. Investors are urged to consider closely the disclosure in our Form 20-F, File No 1-32575, available on the SEC website www.sec.gov.

TVS Motor Company has been synonymous with customer centricity. It will be our priority...

The 80th All India industrial Exhibition,which is set to conclude on saturday,has...