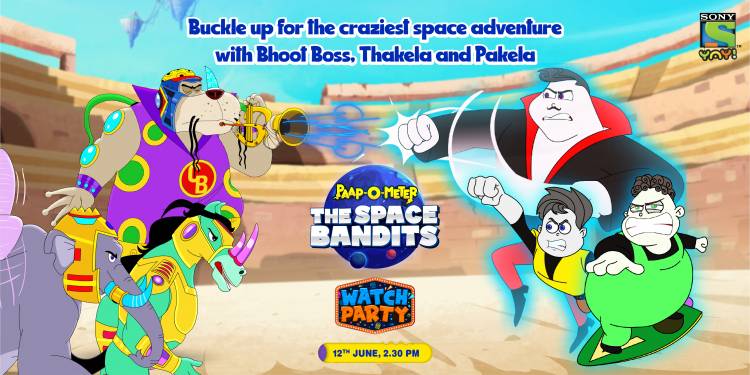 ~After introducing a slew of fresh Paap-O-Meter episodes, Sony YAY! now brings an exclusive telemovie premiere along with an exciting chance for fans to preview the movie~
Press Note:
11thJune, 2021, Mumbai:
Sony YAY!, the popular kids’ entertainment channel, home to the ghost comedy Paap-O-Meter, has changed the way their young audiences perceive ghosts. The show’s endearing trio, Bhoot Boss and his two assistants Thakela and Pakela have earned a special place in the hearts of kids through their paap-busting endeavours in every episode. And now, Sony YAY! is ready to take their young fans, on another spooky adventure, transporting them to the outer spaceby bringing them a special movie telemovie premiere called Paap-O-Meter & The Space Bandits on 14th June at 4 PM.
In this movie, Bhoot Boss and his assistants are challenged by aninter-galactic villain and a notorious Space bandit called Captain Badmaash. This villain also known as CB, steals the Golden Trumpet- a mystical device that gets powered by happiness. The trio set out to stop this powerful antagonist who is on a mission to take happiness away from humans thereby recharging his trumpet to conquer the Earth and Golden Planet. Will they find the solution in time or will Earth and the rest of the universe be left shrouded in gloom and sadness?Tune in to catch Thakela, Pakela and Bhoot Boos in the never-seen-before epic space adventure Paap-O-Meter & The Space Bandits this 14th June, Monday at 4 PM on Sony YAY!
Further adding a pit stop to this inter-galactic journey, Sony YAY! will give all the Paap-O-Meter fans anexclusive chance to watch the movie before anyone through a special Watch Party on 12th June at 2.30 PM. The excitement will be doubled as the art genius Lalon will host a movie themed DIY session to recreate the magical world of the movie with the fans.  Register now for securing your seat in the exclusive zoom workshop on the below link or simply block your date for 12th June 2.30 PM for tuning-in live on Facebook and YouTube channel of the brand.

About Sony YAY! :
Sony YAY! is the first kid offering from Sony Pictures Networks, India. It’s vision is to be a part of kids’ everyday lives through various endeavours. A channel targeted at kids aged 2 – 14 years, Sony YAY! is here to set new standards and benchmarks in kids' entertainment. The channel’s content is unique, fresh and relatable and is produced in India. The channel, within one year, produced 6 original shows which include  Honey Bunny ka Jholmaal - a slapstick comedy with hilarious adventures of an odd team of pets, Paap-O-Meter- a unique laugh-out-loud ghost comedy and KickO and Super Speedo – a tale of a super-kid and his futuristic gadget car who are out to save Sun City and Guru Aur Bhole – a musical comedy, etc. Available in Hindi, Tamil, Telugu, Bangla, Marathi, Malayalam, Kannada, Gujarati, and English. Sony YAY! is the first kids’ channel to be available in 9 languages. The channel has entered into licensing and merchandising, making their endearing characters a part of kids’ lives wherever they are.
About Sony Pictures Networks India (SPN):

The network is recognized as an employer of choice within and outside the media industry. SPN is a recipient of several awards, including India’s Best Companies to Work For 2020 by the Great Place to Work® Institute, India, ‘Aon Best Employers India’ awards in recognition of SPN’s unique workplace culture and exceptional people practices, consistently ranking amongst India’s Top 10 Companies with Best Health & Wellness Practices by SHRM & CGP Partners and listed by Working Mother & AVTAR as one of the 100 Best Companies for Women in India.

Supporting NSS volunteers who continue to serve the nation ........

YES BANK has taken adequate measures to restore banking services and ensured that...

A joint initiative between GSK Pharmaceuticals Ltd and...

The Regional Centre for Biotechnology (RCB), an academic institution of national...