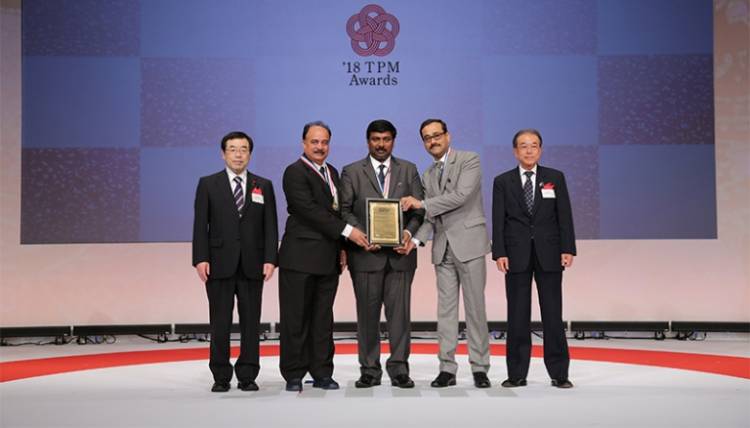 Bengaluru, Karnataka, March 27, 2019: HCCB (Hindustan Coca-Cola Beverages (HCCB) Pvt Ltd) – one amongst India’s top FMCG companies – has entered the list of elite, global, manufacturing organizations. Two of its factories, one each at Ameenpur (near Hyderabad city) and Pirangut, Pune have been conferred the prestigious JIPM (Japan Institute of Plant Maintenance) Excellence in Consistent TPM (Total Productive Maintenance) Commitment Award. The award was handed over to factory managers G. Venkateswara Rao and Kedar Sapre for Ameenpur and Pirangut respectively, at a glittering ceremony in Kyoto, Japan.

JIPM is one of the elite institutions in the world, which promotes safe, secure and reliable, production and maintenance activities in global manufacturing set-ups. Since its institution in 1964, it has also presented the TPM Excellence Awards, and so far, only 2,000 plants in the world have received this award.

Among the 21 plants globally, that have been conferred the JIPM Excellence in Consistent TPM Commitment award, in 2018, there are 11 Indian Plants, 2 of which are the HCCB factories at Pirangut and Ameenpur.

TPM was introduced by the Japan Institute of Plant Maintenance (JIPM) in 1971 and is defined as the ultimate method of pursuing production efficiency. It is intended to encompass the entire company from the shopfloor to the executive boardroom, creating a true company-wide commitment to production excellence, and is designed to avoid any losses by creating a culture of 'zero accidents, zero defects and zero breakdowns’.

Commenting on the recognition, Dinesh Jadhav, Executive Director, Supply Chain, HCCB, said, “This award is the ultimate tribute to the man-machine combination at our world class factories. TPM has been at the core of the construct in our factory operations, as we went about economizing the use of resources and enhancing production. Both these factories anyways have many distinctions to their credit, but the JIPM award is absolute top notch. All credit to the people at our factories, who make the wheels run. I congratulate the entire HCCB family and Kedar Sapre, Venkat and their teams in particular.”

The JIPM award system judges the results of a plant’s activities and presents awards at five progressive levels: Excellence, Consistency, Special, Advanced Special and World Class. On average, it takes about 10 years for a plant to go from the first to the highest level. The auditors of the award review every facet of manufacturing and its contribution and therefore the impact to the overall business.

Tarun Mahadevan, among others, come together to celebrate women entrepreneurs/women...

DUM DUM DUM-If marriages are made in heaven, why is it...

In the backdrop of spreading Corona Virus (COVID-19) in India, One Big Family (OBF),...

Cook it in the tandoor at 300 degree centigrate. Baste it with butter just after...

The event was organised by Infinio Taekwondo World, a franchise based model for...