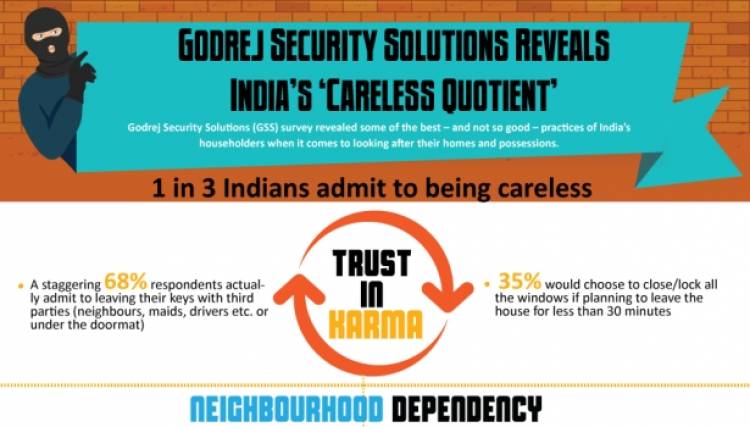 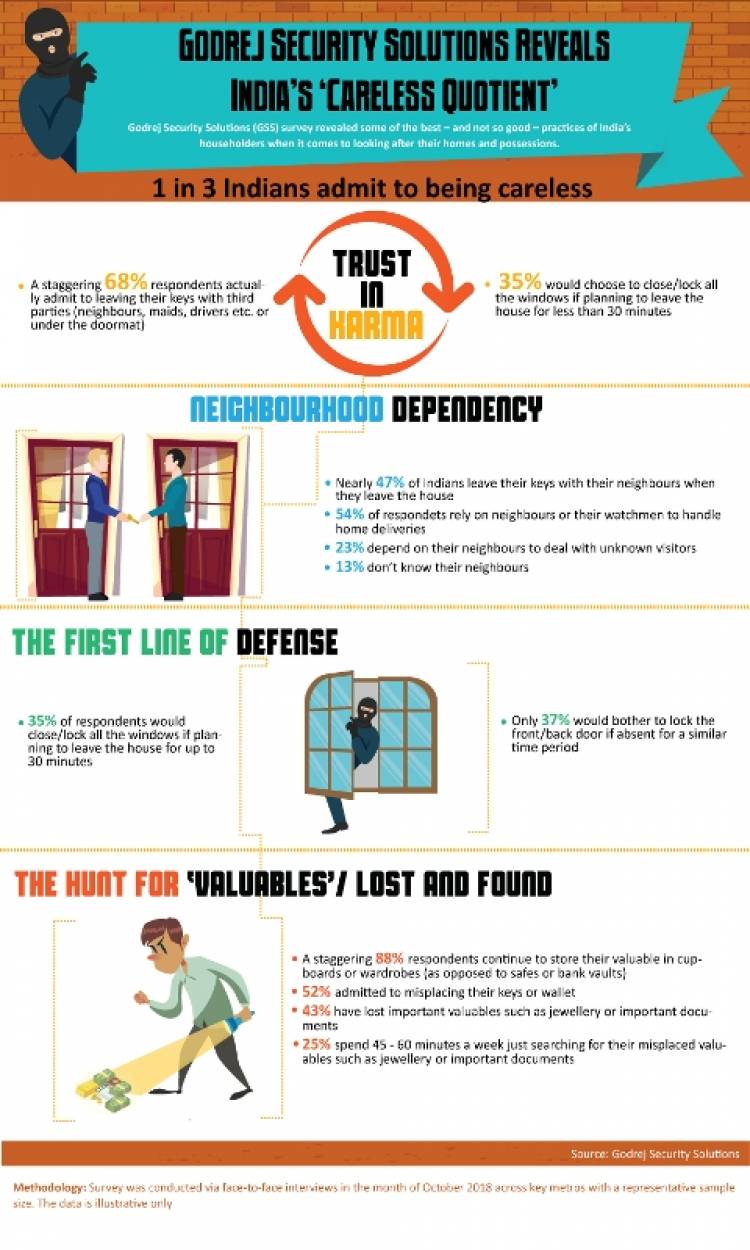 Chennai:  Godrej Security Solutions (GSS), India’s leading security solutions provider today revealed [1] some of the best – and not so good – practices of India’s householders when it comes to looking after their homes and valuables.

57% of respondents admit to regularly leaving their key under the front door mat while they are away; only 16.5 % would choose to close/lock all the windows if planning to leave the house for less than 30 minutes, and only 18 % would bother to lock the front gate if absent for a similar period.

The survey went on to reveal that only 20 percent of residents of Chennai believe in resorting to the legacy measure of keeping a watchman for safety purposes. Also, a bare minimum of 14.5 % respondents use a bank locker to store their valuables yet only 14.8 % of these respondents have misplaced their documents.

The consequences of India’s so-called ‘Careless Quotient’ were also revealed in the research; 51.8% of respondents admitted to regularly misplacing their wallet, while 48.9% have lost important items such as car keys or house keys.  As a result, over a third of Indian householders (24.6%) are spending 45 - 60 minutes a week searching for their lost valuables!

These findings are published against a backdrop of heightened concerns for home and personal security in India. According to a global crowdsourced database portal, Numbeo [2] , 43.47% of Indians are worried about home-break-ins while 42% are concerned about being mugged and robbed.

Commenting on India’s Security Quotient survey findings, Mehernosh Pithawalla, Vice President and Global Head – Marketing, Sales and Innovation, Godrej Security Solutions & Systems, said, “We have always believed that analogue security measures (including the reliance on friends and neighbours) should complement digital/new-age technology-based security solutions to stay one step ahead of criminals,” he said.

“We strongly believe the citizens of our country need to become proactive adopters of security solutions to protect their valuables and loved ones holistically. It’s about making such considerations a part of our daily routines.  Over half of the respondents from the study (52.3%) accepted to store their valuables in cupboards or wardrobes (as opposed to more secured safes or bank vaults), for instance; and 53.5% rely on neighbours or their watchmen to handle home deliveries. All this despite the availability of simple and cost-efficient solutions to manage such occurrences directly, even what you are out of the house.”

He further added, “We at Godrej Security Solutions have always thrived towards improving and reinventing ourselves to provide novel, efficient and easy to use solutions thereby ensuring not only ‘peace of mind’, but, in many cases, better relations with friends and neighbours who no longer have to be relied upon to ensure the security of your home.”

With an aim to increase the adoption rate of security solutions and build a safer country, Godrej Security Solutions also launched its #SecureWhatYouLove Campaign which relies on the findings from the survey on the ‘Consumer Attitude towards Home Security’. The internal consumer study, which was released last year, revealed that only about 34% of women take security measures while travelling. It further added that the most significant security measure taken by women while travelling (28%) was to inform their relatives. At the same time, only 9% of women use security applications on their mobile phone. However, only a minuscule (2%) were using pepper spray as a measure of their security.

In addition to a wide range of home safes, Godrej’s Home Security range is marked by many other innovative products such as WiFi-enabled home cameras - EVE series and SeeThru Pro – video door phone, making them accessible to users of all age groups and backgrounds and are available across 110 direct distributors across the country. The plan is to expand this count to around 1000 retail counters of different retail formats like Appliances, Furniture, and Hardware Outlets across India, with priority markets being the Tier 2 and 3 cities along with the expansion in four key metros and mini-metro cities.

[1] The survey was conducted via face-to-face interviews in the month of September 2018 across key metros with a representative sample size. The data is illustrative only

The BSE Sensex nosedived by 476 points in early trade today due to sustained selling...

This is homecoming for me: Navjot Sidhu

This is homecoming for me: Navjot Sidhu, A day after his formal induction into the...