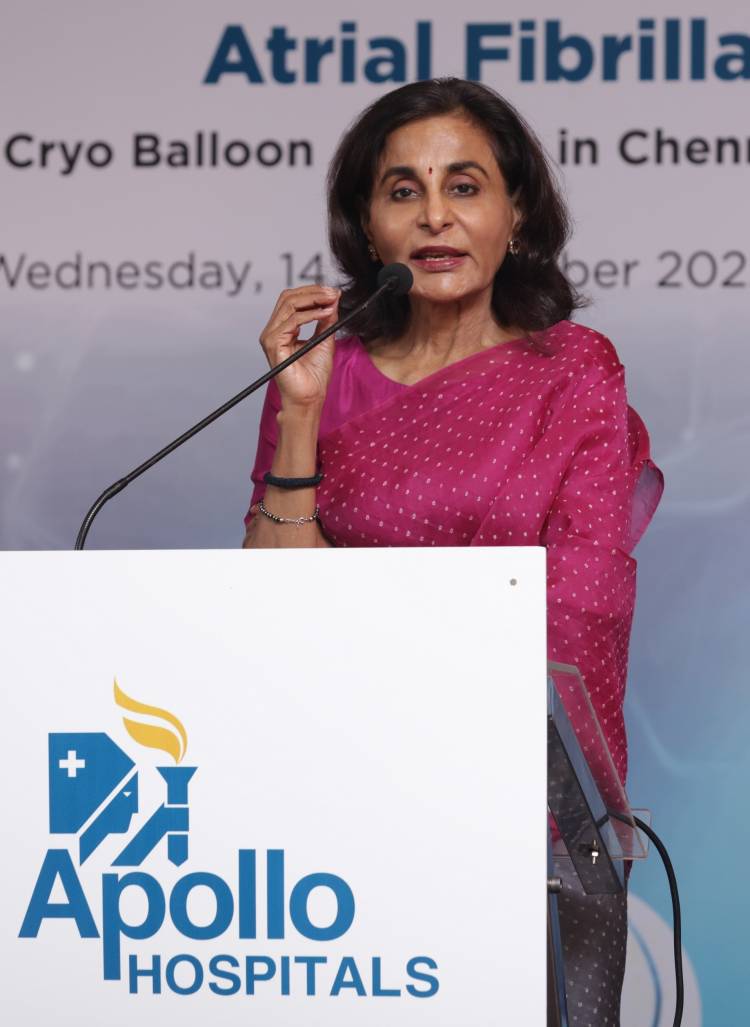 Chennai 14th September 2022:  Apollo Hospitals Chennai brings "Cryo Balloon Ablation" technology, which offers a solution to a complex and common cardiac rhythm disorder called Atrial Fibrillation. Performs the first Cryo Balloon Ablation in Chennai of a 64-year-old lady. As a first in India, the hospital also implanted a Left Atrial Appendage Closure (LAAC) Device on a 52year old lady patient following Cryo Balloon Ablation.
Interventional Cardiologist & Electrophysiologist from Apollo Hospitals have performed minimally invasive procedures on four patients with atrial fibrillation, using the novel Cryo Balloon Ablation technology, and in one  patient , a Left Artial Appendage Closure device was also done.
Atrial fibrillation, also known as AF, is an irregular heart rhythm that affects the upper chambers (atria) of the heart. In AF, the atrium quivers instead of beating normally. AF can also lead to rapid heart rhythm, where the heart can beat as much as 300 times a minute or more in the atria and up to 150 times a minute or more in the lower chambers (ventricles). Those with AF have a five-time greater risk of stroke and two times greater risk of heart failure than those with normal heart rhythms.
Atrial Fibrillation (AF) is a common heart rhythm disorder that affects more than 90 lakh Indians, which increases the risk of stroke, heart failure and death. In AF, electrical impulses (which dictate the heart rhythm) are fast and chaotic, leading to irregular heartbeats and making it less effective in pumping blood.
Explaining the functions of the Cryobaloon Ablation Technology, Dr AM Karthigesan, a Senior Consultant Cardiologist & Electrophysiologist at the Apollo Main Hospitals, Chennai said, "Cryo balloon Ablation” for AF is a new interventional procedure that is employed to control heart rhythms that are caused by abnormal electrical signals travelling from the pulmonary veins to the atria. An inflatable balloon that uses cold energy to remove heat from the tissue and disable unwanted electrical signals by creating a circle of scar tissue (also known as a lesion) around the pulmonary veins. A small incision in the groin area to insert the catheter to access the left atrium (upper chamber). The balloon is inflated and moved till the opening of the pulmonary vein, plugging the opening temporarily so the balloon is able to reach a cold enough temperature. The Cardiac Electrophysiologist then introduces cold energy (nitrous oxide) into the balloon. The cold energy freezes the tissue where the balloon touches the opening of the pulmonary vein. This scars the tissue, stopping the transmission of electrical signals that cause atrial fibrillation. " Early ablation treatment with Cryo Balloon gives better quality of life and reduces the risk of heart failure and stroke in AF patients.
He added, "On the other hand, the left atrial appendage closure (LAAC) device closes off an area of the heart called the left atrial appendage (LAA) prevent harmful blood clots that can form in the LAA from entering the bloodstream and potentially causing a stroke in AF. By closing off the LAA, the risk of stroke is reduced and, over time, patients may be able to stop taking blood thinners. Next-generation technology has a new design to help treat more patients safely and effectively to ensure the best long-term outcomes. It's a permanent device that doesn't have to be replaced and can't be seen outside the body. "
These are the new alternatives for patients with AF who are at risk for a stroke, especially those with a compelling reason not to be on blood thinners. Both the procedures are done under general anaesthesia and takes about an hour. Patients commonly stay in the hospital overnight and leave the next day.
Speaking at the conference, Ms. Suneeta Reddy, Managing Director, Apollo Hospitals Group,  said, "For decades, Apollo Hospitals has been bringing new life-saving services and procedures to the people to improve their health and wellness. This new procedure is another reminder of that commitment. "
About Apollo Hospitals:
It was in 1983, that Dr Prathap C Reddy made a pioneering endeavour by launching India’s first corporate hospital - Apollo Hospitals in Chennai. Now, as Asia’s foremost trusted integrated healthcare group, its presence includes over 12,000 beds across 72 Hospitals and 4100 pharmacies, over 120 Primary Care clinics and 650 Diagnostic centres, 700 plus Teleclinics, over 15 medical education centres and a Research Foundation with a focus on global Clinical Trials. The most recent investment was the commissioning of South East Asia’s very first Proton Therapy Centre in Chennai.
Every four days, the Apollo Hospitals Group touches a million lives, in its mission to bring healthcare of international standards within the reach of every individual. In a rare honour, the Government of India had issued a commemorative stamp in recognition of Apollo's contribution, the first for a healthcare organization. Apollo Hospitals Chairman, Dr Prathap C Reddy, was conferred with the prestigious Padma Vibhushan in 2010. For 38 years, the Apollo Hospitals Group has continuously excelled and maintained leadership in medical innovation, world-class clinical services and cutting-edge technology. Its hospitals are consistently ranked amongst the best hospitals in the country for advanced medical services.

The Supreme Court on Wednesday sought response of the Jammu and Kashmir administration...