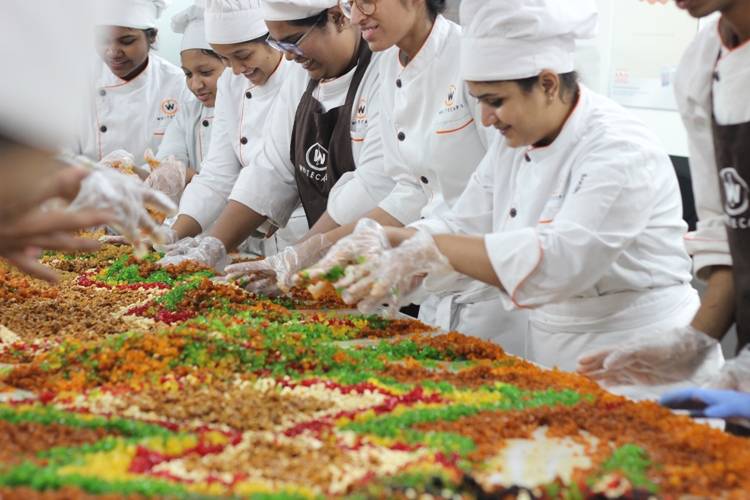 Bengaluru 19th November 2019- Christmas cake is a historical tradition prevalent since 1700 in the British colonies. In those days it was a plum porridge which people used to eat after a day of fasting on the eve of Christmas. With the Evolution of mankind, the plum cake was upgraded with the inclusion of dry fruits, spices. This porridge eventually turned out to be a Christmas pudding with the time to come eggs were added to the recipe the richer families with ovens started making fruitcakes with Marzipan. However, the richer families started adding scotch, whiskey or other whiskey’s to make it popular.

Cake mixing is a precursor to Christmas and is celebrated as an event a month prior to the advent of Christmas. This event while flags of the Christmas for the year. Starts off with an activity where dry fruits like almonds, strawberries fruit cherry, etc. are soaked in liquor which is poured into the airtight container every week, this process is also called “feeding the cake”

This cake mixing activity was celebrated at Whitecaps International amidst participation from all the students of the Institute. Whitecaps also call this activity which is largely a celebration of family and friends. It is not just mixing of Fruits and liquor but also mixing of ideas, cultures, and thoughts that make it “The power mix”. Now with this process, everyone looks forward to a yummy plum cake in the making, a small portion of the mix is also saved for the next harvest season with the hope that the coming year would bring joy in abundance and blessings in plenty.

Vedkiran Director of Marketing said, “it is fun to see the youngsters working together to create a cake for the annual Christmas event and I am elated that they also get to learn about plum cake making in its traditional form”.

McDormand, Tilda Swinton. Jared Gilman, Kara Hayward. Set on an island off the...

Distil at Vivanta by Taj-Connemara will come alive this Saturday with high voltage...