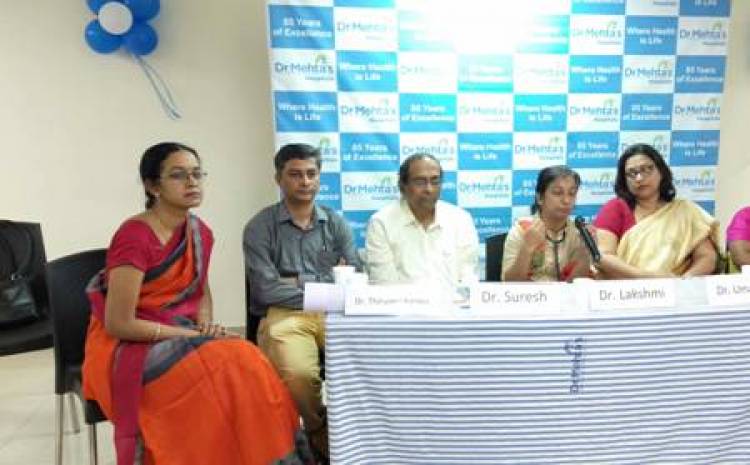 EX-utero Intrapartum Treatment (EXIT) is a procedure that is used to deliver babies with a neck swelling or where ever a difficult airway is anticipated due to a mass in the neck or upper chest. The procedure preserves utero-placental gas exchange ie the baby continues to receive oxygen and nutrients from the mother until an airway is established by placing an endotracheal tube and lung ventilated with satisfactory oxygenation

Mrs D who was having antenatal care at Seethapathy Clinic & Hospital, had an ultrasound for checking the growth of the baby in her 28th week and this revealed a swelling on front of the neck of that baby possibly from the thyroid gland. This swelling was large, restricted the baby’s swallowing causing pressure effect on the neck of the developing baby and resulted in increase of the fluid around the baby.

A detailed work up was done by the Fetal Medicine team at Mediscan Systems, and by testing the fluid around the baby and blood sampling, it was confirmed that the swelling was an enlargement of the fetal thyroid gland due to hypothyroidism.  The baby was treated in utero. Two injections were given into the amniotic fluid at an interval of 2 weeks which showed improvement in the level of the thyroid hormones in the fetus. This also helped to reduce the amount of amniotic fluid and a small reduction in the size of the thyroid swelling.

At 36 weeks a fetal MRI was done which showed compression of the trachea (airway) which would make it difficult for the baby to breathe if it was delivered. Anticipating problems in securing airway an EXIT procedure was planned at Dr. Mehta’s Hospitals

The details were discussed with the parents and family and after explaining the need for an elective caesarean with EXIT procedure and possible problems, informed consent was obtained.

The multidisciplinary team of fetal medicine, obstetricians, neonatologist, anesthetists, paediatric ENT, paediatric surgeons and theatre staff came together and planned for the procedure.  A mock drill was done the day prior with the entire team

The maternal team included the anesthetist, Obstetrician and fetal medicine. They needed to keep the mother under general anesthesia and keep the uterus relaxed at the same time keep the placental circulation going till the procedure on the baby is over.

The multi-disciplinary team involving a neonatologist, pediatric anaethetist, pediatric ENT Surgeon, Pediatric surgeon in case a surgical resection of the mass is required for the baby was the key. Ideal positioning of each team with assistants and necessary equipments were kept ready so that there is enough room for everybody to perform once their turn comes.

A caesarean section was performed under general anesthesia, the baby was delivered only upto the head and held in position with the body still in the uterus with intact umbilical cord.  An attempt to intubate the airway with a tube to make an air passage for breathing was attempted. As we were not able to visualize vocal cords, under bronchoscopic guidance airway was secured by the team, after the airway was secured, the baby was delivered and then the cord was cut.

The Baby needed ventilator support for 2 days. In the meanwhile baby’s blood drawn for  thyroid function tests and oral  thyroid hormone replacement  started. With that the swollen gland started shrinking well, the baby was taken off the endotracheal tube and ventilation on day 3. Baby was able to breath easily without difficulty.

During the ongoing Covid-19 outbreak the country’s police force is on the frontlines...

Storm over city, Over 30 trees uprooted in Chennai

Gusty winds, heavy thunders and non-stop rains. The effect of the depression over...

Taking a swipe at arch rival DMK's recent advisory to partymen to cut down on banners...