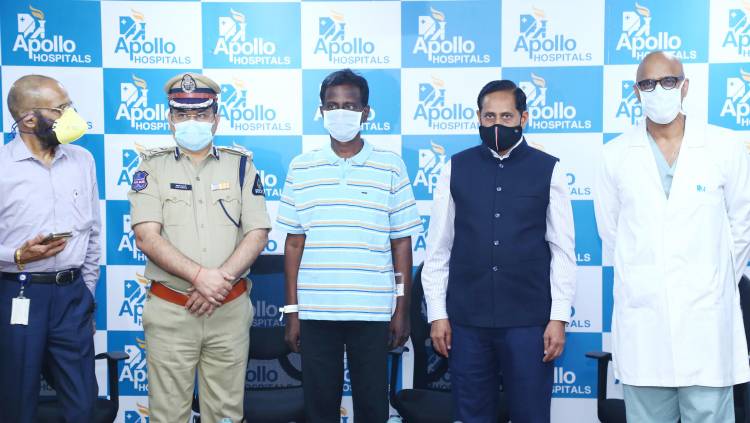 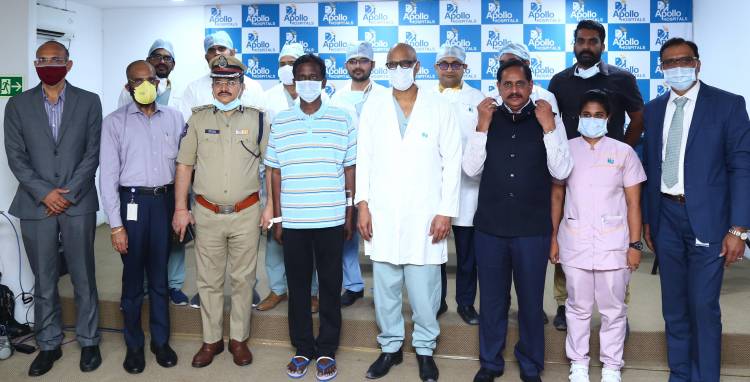 Hyderabad, 15th February 2021: The Heart transplant performed on a critical cardiac patient at Apollo Hospitals, Jubilee Hills, with the cadaver heart transported through Metro rail, was successful with the heart recipient recovering fully. For the first time in the history of organ transplantation, anywhere in the world, metro rail was used to transport the organ. A green corridor was specially created by Hyderabad Metro Rail and Hyderabad Police, for the cadaver heart to reach Apollo Hospitals at Jubilee Hills, expeditiously.

The speedy transportation of the heart by a dedicated metro train during peak traffic hour played a critical role, it enabled to bring the cadaver heart intact and aided in the overall success of the surgery, says Dr. Alla Gopala Krishna Gokhale. Transplantation has now become common, but one interesting aspect is that the Apollo Hospitals Group ranks number two in terms of number of transplants done by a hospital group in the world. This time we created a new green channel of bringing the cadaver heart by Metro Rail, instead of the usual ambulance, helicopter etc., because the situation demanded and by road from one part of the city to another part would have taken lot of time. For a heart transplant we can bring the heart with in 4 hours and transplant, but this patient was critical, he was on a death bed and needed the heart to be transplanted within 1 to 2 hours to get best results. With the help of Police and Metro Rail we brought the organ by a dedicated metro train for the first time in the world. It was a spontaneous thought of exploring the metro option to speed up the transportation which helped. Even Metro Rail responded in less than 10 minutes to support the cause. We were not sure how the patient will recover after heart transplant, but he recovered very well the very next day, was able to walk the third day and getting discharged today. This effort of bringing by metro rail and the excellent coordination between Hospital, Metro rail and Police has to be recorded in transplantation history.

Dr K Hari Prasad said, the patient’s two young children and family would have been on road but for the organ transplant and we need to express gratitude to the donor and his family for coming forward to donate despite their distress, than the Doctors of Kamineni Hospital for counselling the donor family and convincing them, the third party is the Metro Rail which came forward to transport by a dedicated train to reduce the time, the city police for creating a dedicated green channel and  being humanitarian to ensure for organ transportation. Jeevandatha the nodal agency managing organ donation also need to be appreciated, because they are the most efficient nodal agency in the country. Dr Gokhale and his team deserve appreciation for the marathon transplantation effort.

Mr. Anil Kumar said, Hyderabad Traffic Police has been creating green channel for organ transportation for the last 2 to 3 years, in fact last year we created the green channel 25 times, almost every week we are doing it this year. We consider it a privilege, it is our way to show that we care for the common man and the public and therefore laying lot of emphasis on such support, we are available 24/7 to extend such support. This event was historical and as Hyderabad’s we feel proud for doing this in our city and saving a precious life.

Mr. Anil Kumar Saini said, it’s a great occasion that a life has been saved through a dedicated train. Metro Rail which is the life line of the city and proves it can play a critical role in saving lives, we are ready to serve in future too.

Earlier on February 2nd, 2021; the team of specialists led by Dr. Alla Gopala Krishna Gokhale, harvested the heart of a brain dead 45-year-old male farmer at Kamineni Hospital, LB Nagar. The organ was immediately transported through a road and rail green corridor created specifically for it. The transit which took just about 40 minutes involved transportation of the organ by road from Kamineni Hospital, LB Nagar to Nagole Metro Station, by a dedicated Metro train from Nagole to Jubilee Hills Metro station and later taken by road to Apollo Hospitals, Jubilee Hills. Transporting the organ by road alone would have taken over two hours, especially during the peak traffic hour and could have led to complications in transplanting the organ. The surgery performed to transplant the heart took over eight hours and the patient gradually recovered over the last fortnight. He is hail and healthy and lead a normal life with certain precautions.

The IOC said on Sunday the body would wait four more weeks before announcing its...