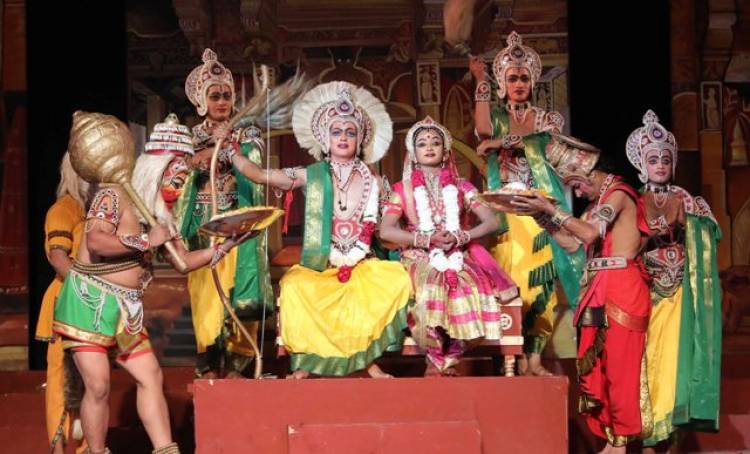 As the country begins the joyous celebrations of the festive season, Shriram Bharatiya Kala Kendra brings forth the 63rd edition of its legendary version of Ramlila “SHRI RAM”, which will be inaugurated by the Hon’ble Vice President of India, Shri M. Venkaiah Naidu, on Sunday the 29th of September 2019. Conceptualised and Directed by Padmashri Mrs Shobha Deepak Singh, who is the Director and Vice Chairperson of the institution, the show will be presented from 29th September to 25th October 2019, 6.30pm daily, at the Kendra Lawns, 1 Copernicus Marg, New Delhi.

Making its mark for all these years amongst audiences within India and abroad, this Sampoorna Ramlila “SHRI RAM” is one of the oldest and the most celebrated versions of Ramlila. The show stands testimony to the Director’s vision, zeal and ingenuity that have enabled her to transform the production into a spectacular Audio-Visual presentation.

This is the 63rd consecutive year of this Sampoorna  Ramlila, which was first launched in 1957. The show presents through dance, drama and music the life and deeds of Lord Rama as the seventh Avatara or incarnation of the supreme god. Within 2 hours and 40 minutes it showcases a very aesthetic, entertaining and emotionally charged spectacle of entire Ramayana. The production having 28 scenes, encapsulates every important episodesof the divine story from Rama’s birth to his marriage with Sita, his 14-year exile at the instance of the wily Kaikeyi, Bharat’s emotional plea for Rama to return, abduction of Sita by Ravan, Shabari’s moksha, Rama’s friendship with Hanuman and Sugreeva, the final battle and ultimate vanquishing of Ravan and ending with Rama’s Rajyabhishek or coronation as the King of Ayodhya.

Under the spirited artistry of director Shobha Deepak Singh, the production has evolvedduring the last thirty years into a rich and splendorous show of dances and martial techniques, changing stage designs and lighting, colourful costumes, headgears and jewellery and varied make-up styles and masks that successfully bring alive the epic. A notable feature of this annual show is the constant effort to experiment with new technology to keep pace with the times and the changing tastes of the new generations. This year the show will be further enriched with the LED Wall displaying stunning scenes and animated visuals in the background, lending a 3D effect to the sets.

When one hears a passionate Mrs. Shobha Deepak Singh talk about Shri Ram – Sampoorna Ramlila, one can conveniently decipher her adoration for the legend of Lord Ram and the moral values embedded in every aspect of His life. It is this previous casket of knowledge that she strives to put forth to the audiences. Having been attached with the Ramlila that was spearheaded by her mother.

Mrs. Shobha Deepak Singh has witnessed and studied the minuscule details and has put in the hard work that goes into the production of a show of this magnitude. In her words, "As a teenager, it was indeed enriching for me to see a whole world of bygone era resurrect right in front of my eyes; fluid fabrics transforming into structured costumes, flowers garlanding around the stage, raw materials building up a palace, all leaving an immense impact in my mind so much so that the memories drive me through the chapters of the Ramayana every passing year. The journey of Sampoorna Ramlila is also my journey as an artist, a producer and as a custodian of cultural heritage."

From backstage to minor roles, to today producing a whole show altogether juxtaposing its relevance in today’s landscape. Mrs. Singh has come a long way in entertaining and enlightening Indians as well as international audiences who look forward to witnessing a performance steeped in Indian Mythology. She further adds, “Working on Ram has been tiring – but never exhausting for here freedom comes to light and dreams became a reality."

Shri Ram is not just an entertainer. It is an excellent assortment of moral values, teachings, beliefs and emotions put together to bring out a bigger picture pertinent to the modern era. The setting and age from Satyug to Kalyug have changed considerably, but the challenges and struggles still exist, their circumstances, however different, their essence and nature are still the same. Through the minute nuances of Lord Ram’s life and His obedience towards His father, Sita’s love in face of adversity and Hanuman’s daring efforts in bringing the Sanjeevani Booti, the show emphasizes on human values, brotherhood, unconditional love and respect for elders.

Tickets for this popular show are available online on BookMyShow and at the venue on 1, Copernicus Marg, New Delhi 110001.