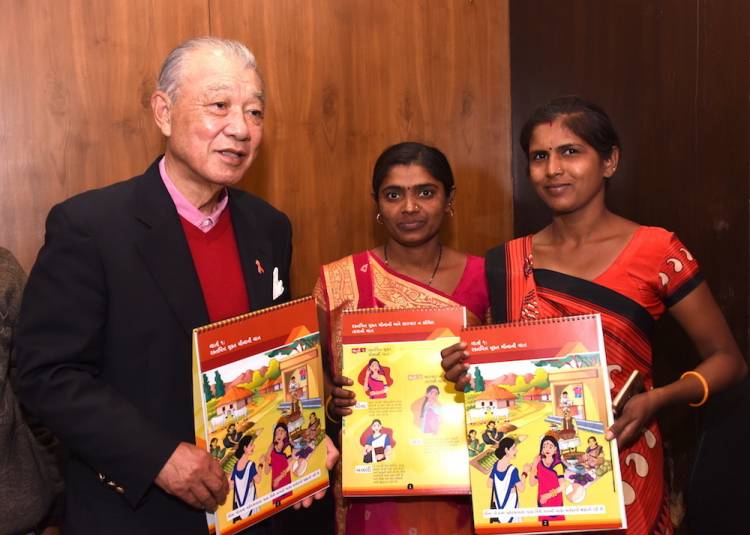 •    to promote early detection and treatment of leprosy in Bihar, Chhattisgarh, Gujarat, Jharkhand, Odisha, and West Bengal
•    WHO India to launch short online video to teach ASHAs how to effectively use the Flipchart
•    Flipchart to reach over 3 Lakh ASHAs

Produced jointly by Sasakawa Leprosy (Hansen’s Disease) Initiative, NLEP and WHO India, the flipchart printed in Hindi, Gujarati, Oriya, and Bengali languages is being delivered to 300,000 ASHAs in 6 leprosy-endemic states: Bihar, Chhattisgarh, Gujarat, Jharkhand, Odisha, and West Bengal. In conjunction with this launch, WHO India will be releasing short online animation films in regional languages for ASHAs to learn how to use this flipchart effectively. This training package will strengthen ASHA’s skills in facilitating early case detection and treatment which is key for further reducing disease burden.

ASHA workers are the backbone of primary healthcare in India. Working quietly but resolutely at the grassroots level to make basic healthcare facilities accessible to those who live on the margins of the society. ASHA workers have been contributing to early leprosy case detection across India.  They visit house to house to identify people with signs and symptoms of leprosy and refer them to the nearest government health facility for confirmation.

Lack of public awareness about leprosy is one of the major problems that India is facing in its efforts against the disease. These pictorial learning materials will assist ASHAs to develop a correct understanding of the disease and encourage community members to support their activities. It will promote self-examination and encourage people to consult an ASHA or visit a government health facility if leprosy signs and symptoms are detected.

“The activities done by ASHAs are a key to achieve leprosy-free India, a dream of Mahatma Gandhi, and I hope this flipchart can be of help for their activities,” said Mr. Yohei Sasakawa, Chairman Nippon Foundation & WHO Goodwill Ambassador for Leprosy Elimination.

Sharing her thoughts on the Flipchart and how it will aid ASHA workers, Ms. Rekha Shukla, Joint Secretary, Health & Family Welfare said “Government of India is committed to making India leprosy free. National Leprosy Eradication Programme is focusing on early and active detection of leprosy cases in order to ensure complete treatment, prevention of physical disabilities and to stop the community transmission. ASHAs are the main front line workers in case detection activities, and incentives have been provided for ASHAs to even carry out the regular screening rounds in the endemic areas. ASHA flipbooks are an important IEC tool not only for ASHAs, but also for the community.”

The MoHFW has made concerted efforts to detect and treat cases early with special leprosy case detection campaigns and other activities. This has had a significant impact on controlling leprosy. In a revamped effort to further reduce leprosy cases, the Ministry recently announced an array of measures to widen population screening and make active case detection a regular activity.

The Initiative is a strategic alliance between WHO Goodwill Ambassador for Leprosy Elimination Yohei Sasakawa, The Nippon Foundation and Sasakawa Health Foundation for achieving a world without leprosy.

Leprosy, also known as Hansen’s disease, is an infectious disease that mainly affects the skin and peripheral nerves. Around 200,000 cases are newly reported each year, and India accounts for more than half of the world’s new cases. Leprosy is curable with multidrug therapy, but if left untreated can lead to disfigurement and permanent disability. This can be prevented by early detection & early treatment. We hope ‘Flipchart’ will play a vital role in early detection & early reporting of cases.

We have launched the report for the fifth year and provides a comprehensive analysis...

Inclusion in focus in cricket tournament organised for...

Sport is known to cut across all barriers and keeping this in mind, a T10 cricket...

Tanishq ropes in renowned actress Nayanthara as its new...

In a bid to further strengthen its strong position in South India, Tanishq, India’s...