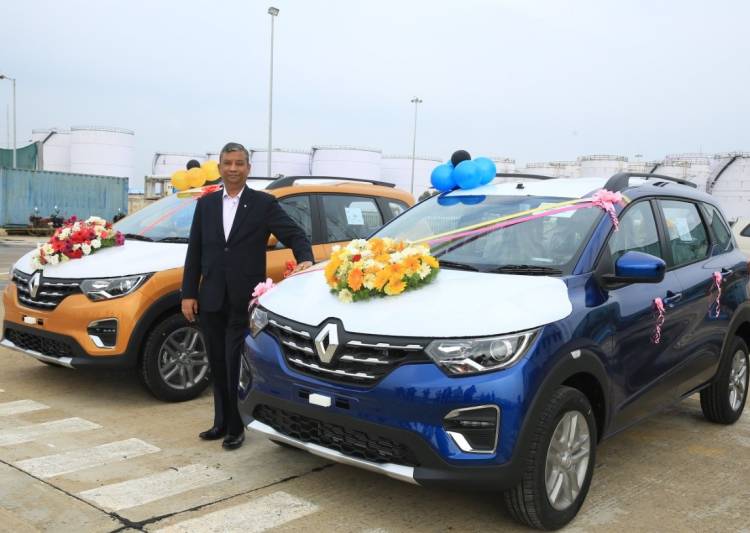 Will expand exports of TRIBER to other parts of Africa, ASEAN and SAARC countries soon

Renault TRIBER has won customers owing to its outstanding quality and superior value package of being attractively designed, spacious & modular and well equipped

Renault, the number one European brand in India, has launched its all new game changer, Renault TRIBER, in South Africa. Renault TRIBER offers an unmatched value proposition to customers looking at a B-segment car. Renault TRIBER is a spacious, ultra-modular, fuel-efficient vehicle with attractive interiors which boasts of many modern and practical features in less than 4 meters.

“TRIBER has already established itself as a breakthrough concept and has seen tremendous acceptance amongst a wide set of car buyers. With more than 28,000 TRIBERs already sold in India, we are proud to launch the Renault TRIBER in South Africa. We will continue this growth momentum and foresee potential growth and high demand from other African markets and ASEAN and SAARC countries alongside growing the TRIBER family in India,” said Venkatram Mamillapalle, Country CEO & Managing Director, Renault India Operations.

The launch of TRIBER has ensured that Renault is progressing despite the challenging macro-economic environment in India. Renault TRIBER is an attractively designed, sturdy, versatile, spacious and modular vehicle which also achieves the feat of accommodating one to seven adults in comfort in less than 4 meters. Renault TRIBER is the result of a complete analysis of customers’ expectations in India which offers unbeatable flexibility. Renault TRIBER offers best level seating space in all rows and offers 625L boot space - the largest boot capacity of its category, in five-seater configuration. Renault TRIBER is built with best level safety features including its class leading offering of 4 airbags.

Renault TRIBER was conceived, developed and produced in India, before taking it to the world. With the launch of TRIBER in South Africa, Renault is delivering on its growth strategy shared at the launch of this new game-changer.

Renault India Pvt. Ltd. is a fully owned subsidiary of Renault S.A.S. France. Renault India cars are manufactured in the manufacturing facility located in Oragadam, Chennai, with a capacity of 480,000 units per annum. Renault India also has a widespread presence of more than 370 sales and 450 service touchpoints, that include 257 service workshops and 215 Workshop On Wheels locations across the country, with benchmark sales and service quality.

Renault India’s product line up and services have seen strong recognition among customers and industry experts alike, winning more than 60 titles, making Renault India one of the most awarded automotive brands in a single year in India. The Renault KWID has already bagged 32 awards, including 10 ‘Car of the Year’ Awards.

'Will expose BJP before people of Bihar': Lalu

Phoenix MarketCity is hosting the well known singer with her troupe Soundarya Jayachandran...