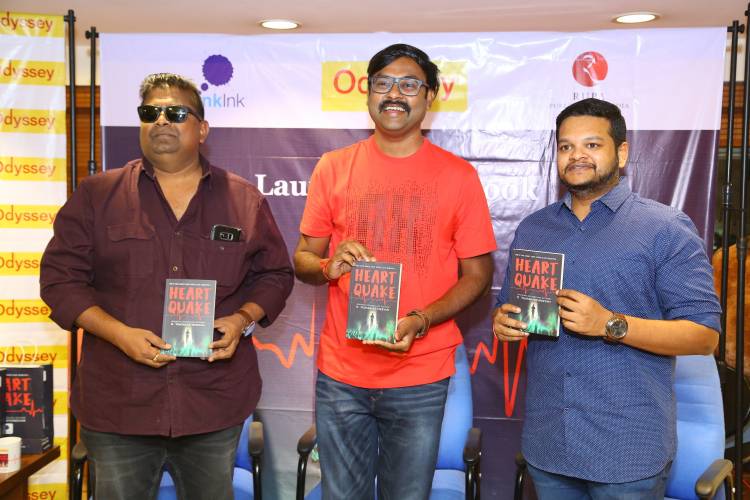 Author K. Vijaykarthikeyan launches his latest work “ Heart Quake “ at Odyssey store at Adayar in the presence of music composer M Ghibran. After the launch , the author addressed the audience on Heart Quake and his inspiration to write the book. He also thanked the audience and his acquaintance for the unwavering support and the motivation it gave him to complete his work.

Once upon a time there was a city plagued by greed, corruption and mysterious deaths. A patriotic IAS officer, Vikram, decides to expose a corrupt and powerful minister, RudraPratapRana (aka RPR), during the latter's visit to the IAS training academy. The video of Vikram asking the minister some highly embarrassing questions in front of a packed auditorium goes viral. Instead of having Vikram suspended from service, a vengeful RPR unleashes violence on the officer's family, and to continue the torture, RPR gets Vikram posted as the sub-divisional magistrate in Laxmipur-the politician's backyard. As soon as Vikram joins duty, RPR resumes his vengeance. However, a new drama unfolds when a large number of people start dying of heart attacks across Laxmipur. As Vikram tries to unravel these mysterious deaths with the help of Veda, a cardiologist, and Raghu, a police officer, extreme panic grips the city, which soon leads to riots and pandemonium. Vikram is left with no other choice but to risk his life to get to the bottom of this mind-numbing situation. Join Vikram in this fast-paced thriller as he fights to save Laxmipur from HEARTQUAKE.

K. Vijayakarthikeyan is a medico-turned-bureaucrat well known for his hugely popular initiatives as an IAS officer. He has won several awards and accolades for his pioneering work in land, solid waste and urban management. He has authored the national bestseller, Once Upon an IAS Exam, as well as five Tamil bestsellers, EttumDhoorathil IAS, AdhuvumIdhuvum, OreyKallil 13 Maanghai, JeyippadhuYeppadi and Oru Cup Coffee Saapidalama. On sunny weekends, he can be found wreaking havoc on the cricket ground with his explosive batting and deceptive spin.

Actor Ambika and Meena in this weekend COLORS Comedy Nights...

Looks like COLORS Comedy Nights is the favourite destination for Kollywood stars...