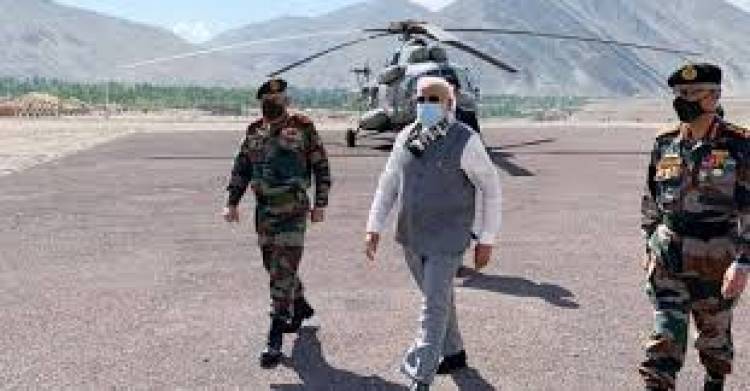 Days after a violent face-off between Indian and Chinese troops in East Ladakh, Prime Minister Narendra Modi on Friday reached Leh where he interacted with personnel of the Army, Air Force and ITBP

He is presently at one of the forward locations in Nimu where he interacted with personnel of the Army, Air Force and Indo-Tibetan Border Police (ITBP), official sources said

Modi was also briefed by senior Army officers, they said

Located at 11,000 feet, Nimu is among the toughest terrains, on the banks of river Indus and surrounded by the Zanskar range.

In his monthly "Mann ki Baat" radio address on Sunday, the prime minister had asserted that India has given a befitting reply to those who cast an evil eye on its territory in Ladakh

He had said while the country honours the spirit of friendship, it is also capable of giving an appropriate response to any adversary

Paying tributes to the 20 Army men killed in the violent stand-off, Modi had also said India's brave soldiers have shown that they will not allow the nation's pride to be hurt.

Telangana will spend about Rs 1.17 lakh crore during the next five years to complete...

VELAMMAL STUDENT SHINES AT THE NATIONAL LEVEL IN CHESS