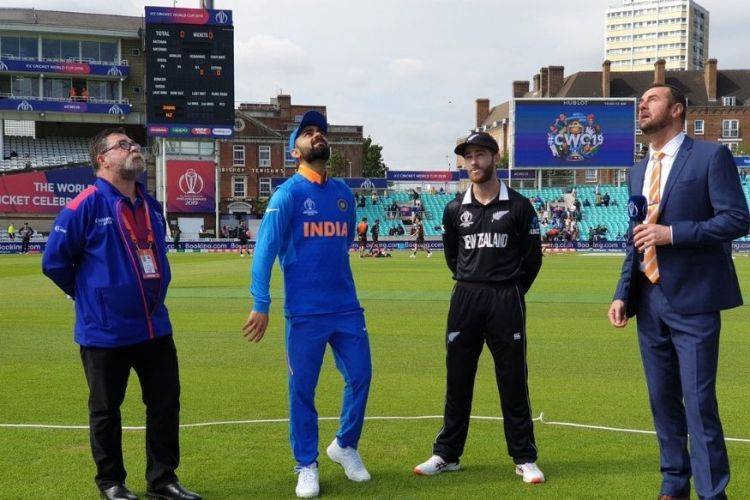 LONDON: India's batsmen cut a sorry figure in overcast conditions in their first warm-up against New Zealand at the Kennington Oval on Saturday. Doing the pitch report, former South Africa skipper Shaun Pollock had said: "It's cloudy and overcast, plenty of grass on the wicket." And India's score read 24/3 in the sixth over after Virat Kohli won the toss and decided to bat first.

In fact, after Shikhar Dhawan (2) and Rohit Sharma (2) were both dismissed by Trent Boult with beauties, the much spoken about No.4 slot saw K.L. Rahul walk in to join skipper Kohli. With the score on 10/2 in the fourth over and the world waiting to see Rahul weave his magic, the batsman ended up playing on one from Boult in the sixth over of the innings.

The conditions were always expected to hold the key and former West Indies skipper Brian Lara had told IANS that the team which manages to adapt best to conditions would be favourite to lift the trophy.

"It all depends on the weather conditions and if the tracks are slow and dry, it will obviously help the spinners. But English weather is so unpredictable that you get a week of rain and you have green tracks. That is why I do like the Indian attack as they have got variety. They got good pace bowlers and spinners who can perform in any condition.

"It is hard to say what the conditions are going to be like, but I think the best performing team will be winning the World Cup and not ones who will wait for the perfect conditions. India and England are the two favourites and quite rightly so because of their performance," he said.

In fact, the legendary Sachin Tendulkar had also told IANS that it will be important for every batsman to contribute and not just rely on the top three - Rohit, Shikhar and Kohli.

"I feel if we have to go forward in this tournament, yes, a couple of individuals here and there will have to step up and the rest of the team will also have to equally play around those players. So, it cannot be that just one individual keeps performing and you will progress in the tournament.

"Maybe a match or two one individual can go out and do something spectacular, but otherwise you need the rest of the teammates to chip in to move forward in the tournament," he said.

And the opening game gave the Indian batsman just the perfect opportunity to showcase their caliber once the top-order failed.

While the jolt before the main tournament gets away is better than facing the heat during the group games, the manner in which the trio of Rohit, Dhawan and Rahul will leave a lot to ponder about for coach Ravi Shastri.

Rohit was dismissed in typical fashion as the ball from Boult pitched in line and came back in to trap the opener right in front of the wicket. For Dhawan, the ball cut back in, the lack of footwork once again on display and the edge landing safely in the hands of the keeper. As for Rahul, the Kiwi pace spearhead decided that he had pitched enough deliveries in the driving zone and pitched one short to catch Rahul unawares.

Kohli too flattered to deceive with a 24-ball 18 as one from Colin de Grandhomme came in after pitching and sneaked in through the gap in bat and pad to give the Indian scorecard a sorry figure of 39/4 in the 11th over.

Don't eat too much potato chips during pregnancy

Nursing student hangs herself in Chennai

A nursing student allegedly committed suicide here on Monday by hanging herself...

Mexico opens its consulate in Chennai Today, The Embassy of Mexico in India inaugurated...

The Singapore Airshow 2018, Asia's largest and one of the most important aerospace...

Have a SMAAASHing week with your kids at Big Deal Days

Have a SMAAASHing week with your kids at Big Deal Days, Take your little ones on...