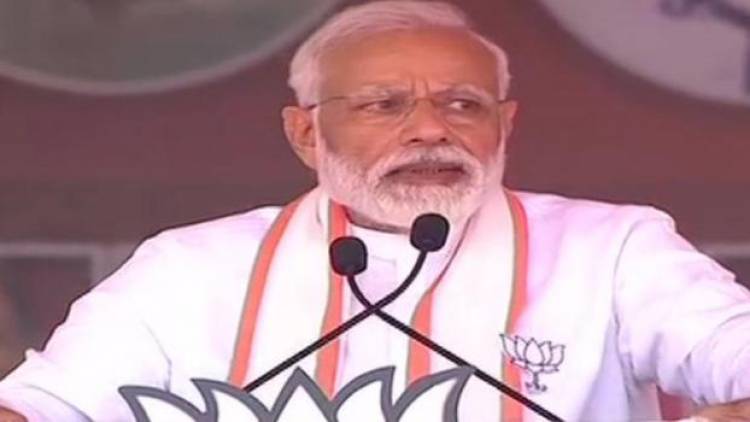 THENI (TAMIL NADU): Prime Minister Narendra Modi on Saturday mocked the Congress's proposed NYAY scheme which translates to "justice" in Hindi literally and claimed that the grand old party has finally agreed that injustice was done by them over the past 60 years.

"Congress and dishonesty are best friends. But sometimes by mistake they end up speaking the truth. Now they are saying Nyay will happen. Even if they did not intend to, they have admitted that they had done injustice for the 60 years," Modi said at a massive rally here.

NYAY is the Congress' minimum income guarantee scheme that the party says lift millions out of poverty.

Modi also asked who will render Nyay/justice:- to the victims of 1984 anti-Sikh riots; to all the victims of anti-Dalit riots; to the government of AIADMK Founder M.G.Ramachandran (MGR) dismissed by Congress because one family didn't like him; to the victims of Bhopal gas tragedy -- one of worst environment tragedy in modern India -- all of which happened under the Congress rule.

Stating that the Congress, DMK and their other corrupt friends can never work for India's development, Modi asked the people present at the rally to decide the fate of those who questioned the surgical strike by the Indian Army.

"When it comes to national security, there can be no compromise. We leave no stone unturned in protecting India and destroying forces of terror. When a brave Indian pilot was captured, he was back in record time. The Congress party politicised the issued," Modi said pointing fingers at the opposition.

Modi said for the state of Tamil Nadu to become prosperous, the game of DMK and Congress must end and the rule of dynasty must stopped.

"As a chowkidar for the nation, I work for the benefit of the people. Your struggle for railway connectivity is known and our government has begun the gauge conversion between Madurai and Bodi."

The Prime Minister assured that the All India Institute of Medical Sciences (AIIMS) and the Integrated Textile Park set up in Madurai will benefit the people of Theni district.

He said the opposition has been unable to accept the fact that "India has been rapidly making a mark in the world under the BJP-led NDA's regime and they are unhappy with Modi".

"Those who were sworn enemies have come together to harm people of Tamil Nadu. Recall 1979, how the Congress humiliated DMK. Recently DMK leaders were in jail for 2G scam," Modi said.

"Despite such bitterness in the past, today Congress and DMK are together to mislead the people. All the corrupt have joined hands to defeat Modi," he added.

Citing the projection of Congress President Rahul Gandhi as the Prime Ministerial candidate by the DMK, Modi said none of the other opposition parties have agreed on it as each party wants its leaders in line for the Prime Minister post.

According to Modi, the Madhya Pradesh government has become the ATM (automatic teller machine) of the Congress party and people were talking about it as the Thuglaq Road scam (where the Congress chief's residence is).

"You all know which big Congress leader stays in Thuglaq Road," Modi said.

US looking at banning TikTok, other Chinese apps: Mike...

US Secretary of State Mike Pompeo on Monday (local time) confirmed that the White...

To encourage people towards a healthier diet, the Government should consider taxing...