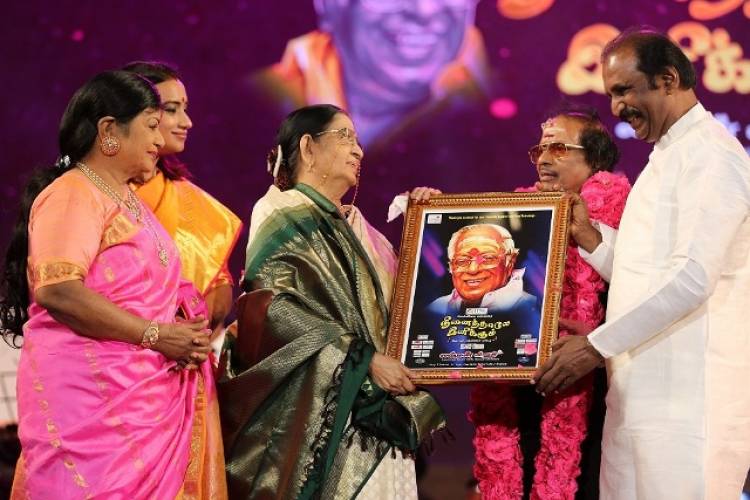 COLORS Tamil takes you on a nostalgic ride with ‘Ninaithaley Inikum’ concert, a tribute to the Melisai Mannar MSV

Chennai,  July 30, 2019: Shivaji, MGR and Gemini Ganesan, the three legendary Tamil heroes of the ’80s have many things in common. Amongst various striking features of their films, one that stands out magically is the music composed by legendary musician MS Vishwanathan. Filling your homes with the music from Tamil cinema’s golden era, COLORS Tamil, Tamil Nadu’s youngest GEC, is all set to present a tribute concert of Mellisai Mannar MS Viswanathan, ‘Ninaithaley Innikum’, this weekend, 3rd and 4th August at 7:00 PM.

Commenting on the occasion, Anup Chandrasekharan, Business Head – COLORS Tamil said, “This is a great occasion for music lovers in the state. We are bringing alive the magic of MSV through SPB, another legend of this industry and many more singers in one show. At COLORS Tamil we are always looking at newer avenues to keep our audiences engaged and partnerships like these take us one step closer to the viewers. We are certain that the beautiful medley of songs will take everyone on a nostalgic trip back in time.”

Transcending generations, MSV rules the magic of music waves even today. From romantic numbers like ‘Azhagiye Megam’ to inspirational songs like ‘Ezhu Swarangalukkul’ from Apoorva Raagangal, MSV’s music has been the soul of movies from the late 1950s to ’70s.  The show will also witnessed a special dance number by COLORS Tamil’s  Perazhgi and Malar fame Gayathri, Arun and Vyshnavi for the evergreen song, ‘Aadaludan Paadal’ .
Commenting on the event, playback singer SPB, as he is popularly known, said, “MSV is a magician when it comes to music, as he has created some unforgettable numbers that live on for generations after generations. He broke away from traditional compositions and experimented with many fusion numbers, which was truly an innovation back then. The intricacies and nuances in his music speak about his passion and knowledge that comes from his rich experience. It is such a privilege and I am deeply honored by this opportunity to render his light romantic numbers.”
For the nostalgic weekend evening, this scintillating concert will be showcased on COLORS Tamil on 3rd and 4th of August 7:00 PM onwards. The channel is available on all leading cable networks and on all DTH platforms - Sun Direct (CH NO 128), Tata Sky (CHN NO 1555), Airtel (CHN NO 763), Dish TV (CHN NO 1808) and Videocon D2H (CHN NO 553). Have you missed any episode? Don’t worry, tune-in to Voot to catch up all your favorite shows.

Pleas in Delhi HC seek FIR against Rahul,Sonia,Owaisi for...

A bunch of petitions was on thursday filed in the Delhi High court seeking directions...