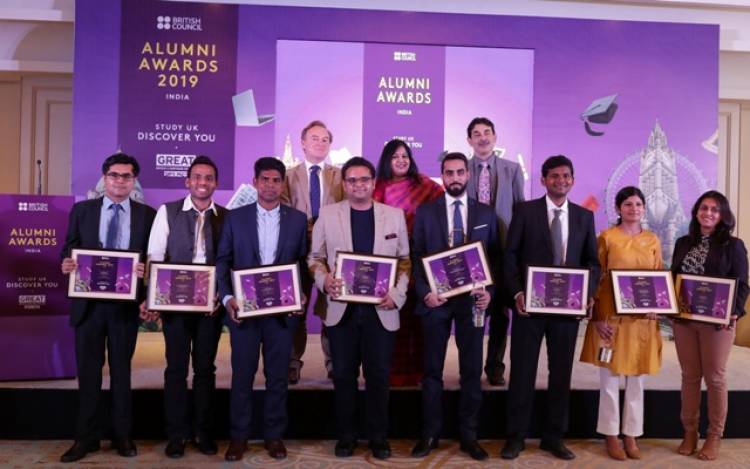 Chennai: Today, the British Council announced the recipients of the Study UK Alumni Awards 2019 in India at an awarding ceremony in Chennai. In total, nine UK alumni in India were recognised for their outstanding achievements as business professionals, entrepreneurs and community leaders, and for their important contribution to strengthening collaborative ties between the UK and India.

The prestigious international award celebrates UK higher education and the achievements of UK alumni all over the world. Now in its fifth year, the award received a great response from international UK alumni in more than 100 countries, representing more than 85 per cent of UK higher education institutions across the UK. Following in-depth interviews with a judging panel, recipients were selected for the three award categories: Professional Achievement, Entrepreneurial, and Social Impact.

The Professional Achievement Award, which recognises alumni who have distinguished themselves through exemplary leadership in their professional field, was presented to Abhijit Mitra. Mitra is leading a project funded by the Government of India to design a high capacity intercity broadband optical network that will be 5G and beyond. He was also Lead Project Investigator for British Telecom Global Research and Innovation Programme in India to assist the opening of its first India Research Centre, thereby enriching the ties between India and UK in the area of broadband telecom. Mitra studied at the University of Leeds in the UK.

The Social Impact Award, which acknowledges alumni who have made an exceptional contribution to creating positive social change, was presented to Rupal Ganesh Kulkarni, a graduate of the London School of Economics and Political Science (LSE). Kulkarni is the CEO of Shram Sarathi, the first dedicated financial services institution in the country that offers wealth solutions to vulnerable migrant workers and their households.

The Entrepreneurial Award, which highlights alumni who have played a leading role in business innovation and/or creative solutions, was presented to Shiv Dhawan, a graduate of the University of Manchester and the London School of Economics and Political Science. (LSE).Dhawan is the Director of India On Track, an organisation set up to instil the core idea of self-belief in the youth of the country through sports.

Janaka Pushpanathan, Director South India at the British Council, said:“We’re delighted to celebrate the achievements of this year’s British Council Alumni Award winners and finalists: outstanding graduates offrom universities across the UK. These remarkable individuals we celebrated today at the Study UK Alumni Awards in Chennai have all taken their UK education as a starting point to excel in their chosen careers and shape the world around them. The winners are today making a powerful contribution to India’s economic growth and knowledge ambitions and creating an impact on the society.”

She further said, “For more than 70 years, the British Council has partnered the ambitions of millions of young Indians through our work, enabling access to world-class UK education and by investing in thousands of scholarships and academic exchanges. We hope to continue this in the future as well.”

This year, we received more than 1200 applications from alumni in 100 countries, representing more than 120 UK higher education institutions. In India, there were 139 applicants out of which nine  were shortlisted for noteworthy achievements in their respective fields.

Tamil Nadu will become a hut free state by 2023: Panneerselvam

Shyam Steel, one of leading producers .....