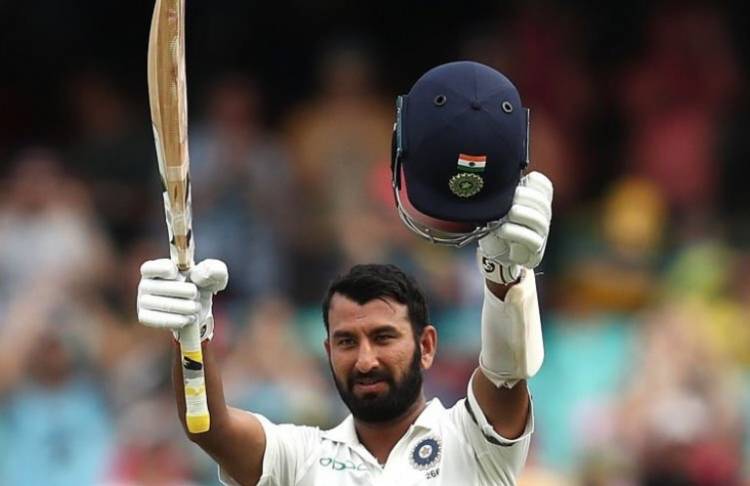 SYDNEY: Cheteshwar Pujara came up with a typically gritty century as India posted 303/4 in their first innings at stumps on the opening day of the fourth cricket Test against Australia here on Thursday.

Pujara was batting on 130 when the umpires decided to call it a day. His 250-ball stay in the middle was studded with 16 hits to the fence. Hanuma Vihari was batting on 39 at the other end.

For Australia, Josh Hazlewood was the most successful bowler with figures of 2/51. Fellow pacer Mitchell Starc and off-spinner Nathan Lyon bagged a wicket each.

India are 2-1 up in the four-Test series.

It was steady batting by Pujara and Mayank Agarwal which harassed the Australian bowlers and the duo were involved in a crucial 116-run partnership for the second wicket.

Opting to bat, the visitors dominated the first session of the day as Agarwal and Pujara added 59 runs for the second wicket after losing out-of-form Lokesh Rahul cheaply.

India received a jolt very early as pacer Josh Hazlewood drew first blood for Australia, dismissing Rahul in the very second over of the day. A good length delivery outside the off-stump got a thick outside edge from Rahul's bat and went straight into the hands of Shaun Marsh at first slip with India's score reading 10 runs.

However, Agarwal and Pujara then played sensibly to deny the hosts any further inroads and helped the visitors reach 69/1 when lunch was taken.

Pujara and Agarwal continued to play sensibly in the post-lunch session, taking their side past the 100-run mark in 30.1 overs. Off-spinner Nathyan Lyon gave the hosts some respite after breaking the well-settled partnership when he dismissed Agarwal on his individual score of 77 runs.

Agarwal miscued a delivery while trying to clear the fence and was easily caught by Mitchel Starc at the long-on boundary. The opener's knock came off 112 deliveries and was decorated with seven boundaries and a couple of sixes.

Agarwal's fall saw skipper Virat Kohli join Pujara in the middle and the duo added a quick 51 runs for the third wicket as India reached a healthy 177/2 at the tea break.

Kohli (23) however, wasn't able to spend much time at the wicket as a short of length delivery from Hazlewood kissed his gloves before landing safely in wicketkeeper Tim Paine's gloves in the very first over after the break.

Ajinkya Rahane then joined Pujara but failed to make an impression after falling cheaply on 18 runs with India's scorecard reading 228/4.

However, Pujara continued to perfectly time his shots at the other end and steadied India's innings with some beautiful and sometimes stunning strokeplay to notch up his ton off 199 delivery.

Pujara smashed 13 boundaries enroute to the 18th Test century of his career.

Rahane's fall saw Vihari join the centurion in the middle and the duo successfully added 75 runs for the fifth wicket in 19.5 overs before stumps were drawn for the first day.

Being a leader in fashion, Flipkart continues to bring the best trends to its customers...

The government on Wednesday said it was ready for a debate on "growing intolerance",...

Embassy Group celebrates the spirit of patriotism with...

On the landmark occasion of the 71st Republic Day,Embassy Group celebrated the spirit...