The first film I watched after returning from prison was "96" 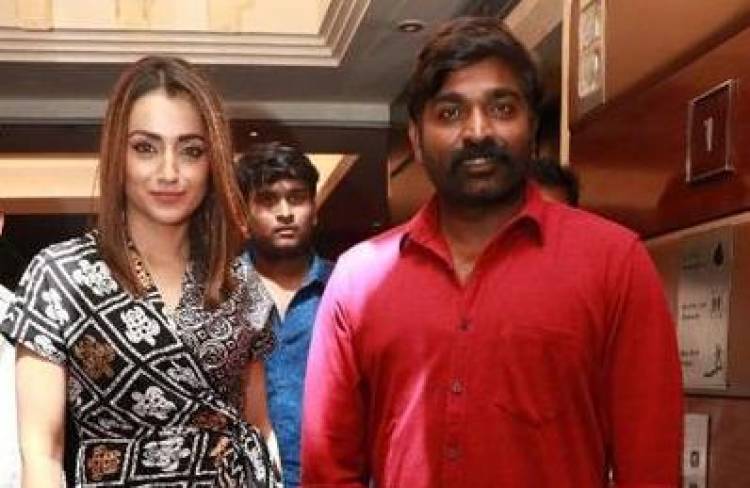 The team of one of Tamil cinema’s finest and most successful films, 96, celebrated the completion of the film’s 100th day in theatres by choosing to honour all its technicians with mementos.

Produced  by S Nandhagopal and distributed by Seven Screen Studios Lalith Kumar, the film, which featured Vijay Sethupathi and Trisha in the lead, impressed audiences so much that it continues its successful run in theatres even after being screened on television.

The event, organized by the team to celebrate the 100th day of the film in theatres, was attended by all the cast and crew members of the film including actors Vijay Sethupathi, Trisha, Divyadarshini, Gouri Kishan and Adhithya Bhaskar. Apart from the cast and crew, celebrities such as directors Cheran, Parthiepan and the founder of the May 17 Movement, Thirumurugan Gandhi, were invited as the special guests for the event.

Speaking on the occasion, Thirumurugan Gandhi said, “I am unable to understand until now as to why director Prem Kumar chose to invite me for this event. We were planning to stage a black flag protest against Rajapakse on Saturday and a black flag protest against Prime Minister Modi on Sunday. It was at this time, that I received an invitation for this event.  I do not know what connection we have with love.”

The leader went on to say, “Heeding to the request of my comrades, the first film that I watched after returning from prison was 96. It was wonderful. Love is such a wonderful thing. Today, we come across several news  reports detailing  acid attacks on women who turn down  proposals. How can people do such things to the woman they love? It is important that we pay attention to where the fault lies. At a time when such reports on attacks on women are increasing day-by-day, this film, 96, which talks about how to celebrate love,  women and nature has released.  Love is not a feeling that arises only in humans. It is a basic trait that is there in all beings in this world.

“The story of the film has been made in such a way that the present happens at night and the past happens during the day. The director has shown that love does not end with a man or a woman. Love transcends all of these. It is to be in love with nature,” he said.

The leader went on to say, “In recent times, Vijay Sethupathi has become my favourite actor. I have said this in a recent interview. The reason is I believe he is an example, a reflection of today’s youth. Vijay Sethupathi showcases the problems that the youth of today face. He reflects their likes, preferences, mannerisms and dreams on screen.  Today’s heroes in films are like superheroes but Vijay Sethupathi appears to be a common man like us when he appears on screen. That is why he is loved by all. When people face difficulties, it is people like Vijay Sethupathi who are able to reach out easily to them.  Trisha had also acted beautifully and my wishes to the director too. “

Gandhi also said, “ Today, the advent of the mobile phones enables us to communicate what we think instantly. We speak about what we like and what we dislike. But this film has spoken beautifully about the experiences of people at a time when there were no cell phones. It has spoken about the experience of either going in person and speaking out what we want to say or not doing so at all, beautifully.  The connection between us and this film is love. We love the people. We love nature. That is why we struggle. This is the truth.“

Speaking on the occasion, Vijay Sethupathi said, “ The presence of political leader and activist Thirumurugan Gandhi here is a very pleasant and big surprise for me. We have put him in a compelling situation whereby he has had to talk about love. I am a huge fan of his thoughts and thought processes. Looking at Thirumurugan Gandhi, he said, “The love you have for us is like that of a brother. I wish that spreads even more. You are a well read thinker, who has understood issues well and in their entirety. I have a request to make to you and that is your speeches must be more commercial in nature.  All good things must reach everybody. As a big fan, I expect your speeches are in such a way that they reach everybody.”

On the occasion, Vijay Sethupathi also announced that he would be acting in Seven Screen Studios’ next film that is to be directed by newcomer Delhi Prasad Dheenadayal.

In the function, as per director Parthipan’s request, Vijay Sethupathi gave Trisha a friendly hug.

Another highlight of the event was a violin recital by the film’s music director Govind Vasantha, who delighted the audience present by playing the film’s theme song.

#IswaryaMenon ending the year with a sizzling red photoshoot